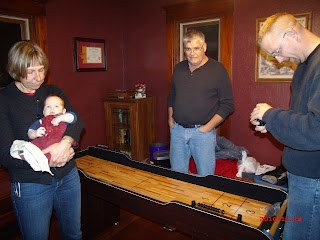 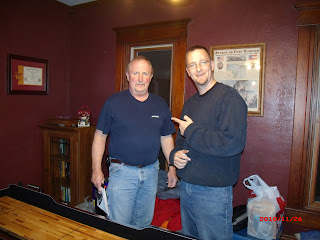 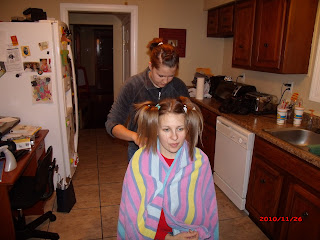 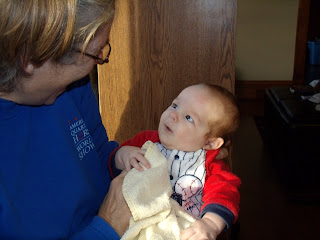 This post represents the sum total of all the things I plan on accomplishing today (other than the general care and feeding of my children).
Why?
Well, because we accomplished an absurd amount of things over Thanksgiving weekend (and by "we", I mean Derek, his parents, my mom and Mark, and my sister Stephanie). This efficiency is so foreign to me (as a mother of three children ages four and under), I feel the need to do as little today as possible, just to restore balance to my little world.
So, what all did we get done this weekend?
Set up a home-gym in the basement, went Black Friday shopping, set up our new Shuffleboard table, decorated the house inside and out for Christmas, further winterized the house, cut my hair, put together the bunk beds for Atticus and Adelaide, purchased mattresses for said bunk beds, and of course, prepared and ate as much food in four days as would usually last us two weeks.
Oh yeah, and Derek and I have both taken turns being sick over the last two weeks. Over the weekend, Adelaide, Atticus, and Becky all shared what seemed to be some kind of flu bug.
Oh, and Dennis and Adelaide went to a Cyclones volleyball game (match? tournament? I profess total ignorance to general volleyball parlance. I'm sure someone will soon be correcting me.), and Derek and I got to go out to eat. (By ourselves. Without children. It was amazing.)
And I suspect Derek made the Vikings win through sheer force of will. You must admit, this is impressive.
And of course, this list doesn't include the requisite two to three loads of laundry I do per day just to avoid being buried by clothing and blankets that are pickled in spit-up and other unmentionable bodily fluids. I live such a glamorous life.
I realize I didn't address any of the things our family has to be thankful for in this post, and this is supposed to be the season of thankfulness; however, Atticus's patience has been stretched to the breaking point just in the time it's taken me to make you all feel bad about how little you got done compared to us this weekend. Our family does have so many things to be thankful for, so let's just plan on making that the topic of the next entry, which I'll try and post within the next few days. (I think I'll end on that note, leaving you all breathless with anticipation.)
Posted by The Crislers at 12:00 PM 2 comments: 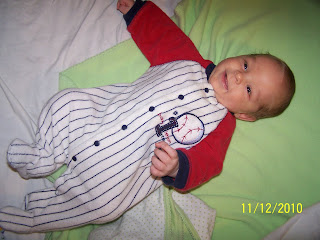 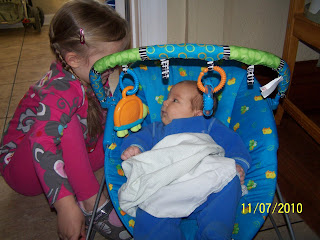 Caedmon has been busy the past week. He was dedicated at church last Sunday morning (along with about a dozen other babies- and that was just during the 9 am service). This morning he had his 2-month well-baby checkup at the doctor's office. He decided to show the doctor just what kind of baby he is and cried almost the entire time; after about ten minutes, she asked about his behavior at home, what his schedule looks like, etc, and declared, "Well, he definitely has colic." So, I guess we now have a reason that he's so cranky all the time; but of course, there's nothing we can do about it. The hopeful news is that colic usually disappears at around three months of age, so let's all pray for just one more month of evil baby.

Thankfully, although fussy, Caedmon has a healthy appetite and is growing well: he now weighs 13 lbs, 6 oz, so he's gained about five pounds in the past two months, and he's 22 1/2 inches long, so he's grown about 1/2 an inch. He's in the 90th percentile for his weight, and 50th percentile for length. (In comparison, Adelaide was 13 lbs 9 oz, 24 inches, and Atticus was 14 lbs 11 oz, 25 inches at two months.) We ended the visit to the doctor with three shots in poor Caedmon's legs, plus an oral vaccination for Rotavirus (and Atticus took his Flu Mist up the nose like a champ). Dr. Halbur always likes to scare me with information like, "About 1 in every 200 babies who contract pertussis (whooping cough) dies, and there's a pertussis outbreak in Iowa right now," until I'm begging for the immunizations. Atticus dealt with the whole appointment quite well, although he did start yelling, "Mommy go! Mommy go!" (which is his way of saying he wants to leave) when they gave Caedmon his shots and really made him scream.

On a positive note, Caedmon does like his brother and sister, smiling and cooing when they stray into his visual range, and he has an amazing tolerance for the amount of noise they make. He passed all his developmental milestones at the doc's with flying colors, and he's sleeping pretty well at night. We're all looking forward to lots of food and family next week with Thanksgiving.
Posted by The Crislers at 12:15 PM 2 comments: 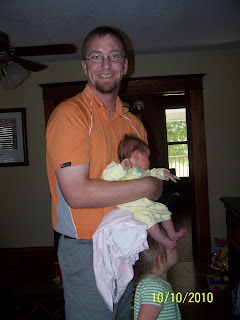 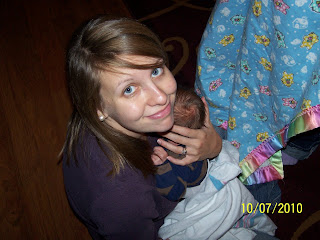 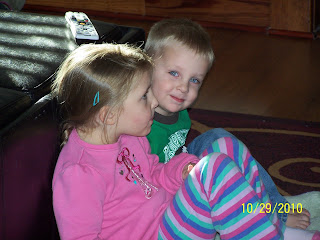 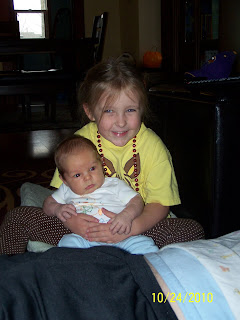 This has been a pretty quiet week. And by quiet, I don't actually mean quiet. How can it be quiet, with Caedmon crying (almost anytime he's not eating), Atticus screaming (because he's having to share, he's fallen down, he's upset, he's breathing...) and Adelaide also crying due to having Nursemaid's Elbow for the FOURTH TIME (otherwise known as having her elbow dislocated), this time because another little girl at school tried to pull Adelaide up off the floor. Fortunately Derek has become an expert at talking me through popping it back into place over the phone, thus saving us a $10 copay for a ten-second doctor's visit.

On the bright side, we decided it's close enough to Christmas to start playing Christmas music at our house, the Vikings won last weekend, brightening everyone's mood, and Caedmon is starting to smile a little more often, even cooing at all of us a bit (I think he wised up to the fact that no one could take much more of his drama... the big baby).
Posted by The Crislers at 1:42 PM 1 comment: 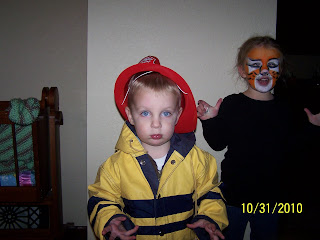 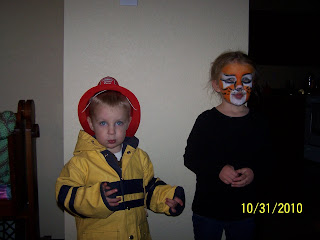 About a month ago, Adelaide received this month's copy of the magazine "Ranger Rick."
Amongst fascinating facts about crocodile fish and desert creatures were photos and instructions on how to paint your face and become a tiger. She instantly decided that's what she wanted to be for Halloween, and began practicing her "tiger growls." So for about $7, Adelaide got to be a tiger, once for her Halloween party at school, and once for trick-or-treating (and judging by the amount of makeup left over, we should be able to face-paint the kids for the next 10 Halloweens). The tiger growl came in handy when one man actually requested a trick before he would give her any candy. I didn't know people still did that.

Atticus didn't really have a clear concept of what Halloween meant, so it was decided for him that he would be a fireman, mostly owing to the fact that Adelaide recently took a field trip to the Huxley fire station and came back with a Junior Fire Fighter hat. Interestingly (but not surprisingly) enough, I saw 4-year-olds in Adelaide's class whose hats fit just fine. As you may be able to tell in the pictures, the same hat just sort of perched atop Atticus's gigantic head. Another fun fact about his costume: his fireman's coat was also my raincoat in kindergarten. Total cost of Atticus's costume: $0.

We had a great time trick-or-treating. Derek corralled Atticus and Adelaide, while
I carried Caedmon, who was dressed up as a bundle of blankets. Our route was basically just a trip around the block, but the kids still brought home a fairly decent haul. Our neighbors are apparently very generous candy-givers, as evidenced by the couple houses who even gave out full-sized candy bars. All in all it was a good night.
Posted by The Crislers at 3:14 PM 2 comments:

Well, let's just see how this goes. I've created this blog in order to try and share information with our far-flung family and friends. I'm terrible about emailing pictures, and frankly, Facebook kinda creeps me out. I plan to post pictures and/or news and trivialities about our little family, and my goal is to do so every week. I'm putting that on here so that everyone can hold me accountable: if I start slacking and don't update this on a regular basis, remind me about my weekly goal. I'll probably either get back on the ball and post something or yell at you about how I have no time.
-Kristy
Posted by The Crislers at 3:02 PM No comments: