A few weeks ago, I planted three little hills of Baby Boo pumpkins in the vegetable garden.  I put five seeds in each hill, and hoped all five would sprout so that I could keep the two strongest plants and thin the rest out.  Pretty standard, right?

So here we are, a few weeks later, and my seedlings are a couple inches tall.  I've been checking them every day, waiting until they look strong enough and I have some obvious front-runners.  Yesterday, I decided it was time to start thinning.  I straddled the fence surrounding the garden and finally made it in (the fence is a bit too tall for me), then crouched down and cast a critical eye on the first hill.  Just as I stretched my hand down to pluck the runtiest of the group, I thought I heard screams.

Let me be clear.  I am neither a vegetarian nor a vegan.  I am not in any way opposed to hunting, as long you're not killing some endangered species.  Even then, I'm not going to be crying any rivers unless it's something really cute like dolphins or baby elephants.  I have no problem with killin' stuff.

Except, as it turns out, baby boo pumpkins.

Each time I reached toward those little pumpkin plants, I swear I heard wailing and screaming, and imagined their teeny tiny pumpkin roots clinching in fear, perhaps reaching for each other in a show of pumpkin solidarity.

Eventually I worked up the nerve to pull one up- and immediately thought I heard more tiny screams and even a small voice yelling,   "Oh, the horror!  The horror!"

Then I told myself to snap out of it and pulled the rest up without incident, tossing each carcass over the fence with nary a compunction.

As I vaulted back over the fence and out of the garden, I shook my head at my own silliness, until... until...

... Until I came across the pile of victims.  And noticed that someone had gone and drawn a chalk outline around them.

Adelaide saw me staring in wonder, and piped up, "Doesn't that make an interesting shape, Mommy?" 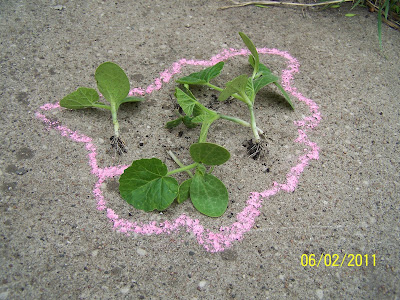 I stammered out a reply in the affirmative and admitted I'm going to have a heck of a time thinning out my zucchini next week.
Posted by The Crislers at 7:51 AM