The kids and I just spent the past week and a half down in southern Kansas.  Like so much of the country, that area was caught up in a killer heat wave.  Ten minutes from our destination, I looked up at the rearview mirror and took note of the digital temperature readout:  108 degrees.  That's Fahrenheit, people.

The dj on the local radio station confirmed this moments later when he announced "...and the current temperature is 108 degrees!  But don't worry, folks, the heat index is only 111!"

Let's just say it was hot.

Yesterday, as we were driving home, I got to watch the temperature drop from 98 degrees at 10:00 am all the way down to 80 over the course of an hour as we drove north and into a cool front.  It had climbed back up to the upper 80's by the time we got home, but that was still an improvement over temps that make you feel like you're going to keel over if you walk more than ten steps outside of the air conditioning.

One of the ways we stayed cool during our visit was by visiting the local pool (excuse me, the local aquatic center- since when did public swimming pools become so snooty?  It's happening up here, too).  It just happened to be Free Swim Day sponsored by the town VFW.  There was a big turnout, and a photographer from the newspaper was there taking pictures.

Guess who made the front page? 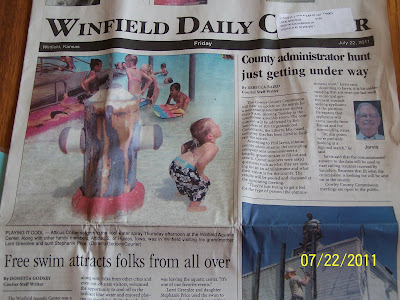 True, you can't really see his face, and we're talking about a paper in a town with all of 13,000 residents.  But still!  We blow into town on Saturday, and six days later the kid is front-page news.

Pretty cool.  (Pun most definitely intended.)
Posted by The Crislers at 2:08 PM