Three or four months ago, Caedmon started crawling.  He celebrated his new-found independence by, well, crawling.  He crawled here, there, and everywhere, investigating our house, the Crisler domain.

This, of course, made it so that I had to keep a closer eye on him than when he was more stationary, but overall,  he used his powers of mobility for good rather than evil.

All that has changed in recent weeks.  If there is anything two and a half feet or lower that should not be pulled on, bashed with a blunt object, or eaten, he will find it.  He's not being wilfully disobedient.  He's just hit that curious-almost-one-year-old phase.  If he's anything like Atticus, this phase will last until he hits the downright-destructive-toddler phase.  We're still waiting for Atticus to leave that one behind (although he's getting much, much better; I haven't found anything coated in baby powder, Vaseline, or lotion in months).

Thankfully, neither of my older two children were climbers.  I've seen those other kids; a few of my friends were lucky enough to have some.  Those are the kids that I have literally seen climb up drapes and swing from light fixtures.  And thank you Heavenly Father, for all his untidy curiosity, Caedmon is, thus far, not a climber.  In fact, he appears to be the opposite.

Several months ago, before he could even crawl, I heard Caedmon crying.  I searched all over downstairs, trying to follow his sounds of distress, but could not figure out where the boy was.  Finally, I got down on my hands and knees, and then found him under the couch in the front room.  He had scooted himself backwards underneath it and couldn't get back out.

Just about a month ago, I found myself in a similar situation.  Crying baby, unable to pinpoint his location.  I first checked under that couch (because he actually did that several times), but he wasn't there.  Eventually I Marco Polo'd my way over to the couch in the living room, and discovered him squeezed into the small space in between the bottom of the couch and the wall.  Stuck again.

Last week he found a new hiding spot: the kitchen cabinets.  To be fair, I'm pretty sure that he crawls in there, and his brother shuts the door behind him.  It is now not uncommon for me to open a cabinet door, looking for a pan to start supper, and find this instead: 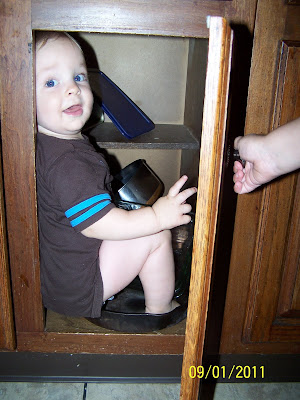 I don't really mind any of that.  It's just healthy exploration, after all, and anything is better than his other new favorite game:  reach into the bowl and splash in the toilet water so violently that it drenches Mommy's sputtering face while she's trying to drag you away. 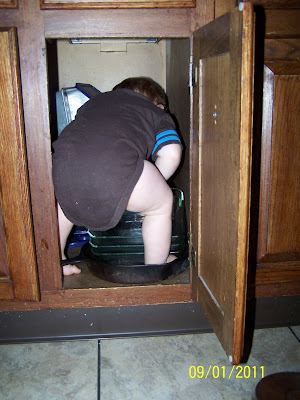 Children are just such a blessing, aren't they?﻿
Posted by The Crislers at 12:55 PM

Email ThisBlogThis!Share to TwitterShare to FacebookShare to Pinterest
Labels: Caedmon