I'm Worried About My Anxiety

I am a worrier.

I worry about little things and big things.  Trivialities and larger issues.  I'm usually able to keep it from progressing to bona fide anxiety- but only just.

I generally try to get a handle on it by reading things like Matthew 6:25-34, listening to Monty Python's I'm So Worried, and laughing at my own egotistical silliness: like my worrying could ever actually change anything.

One of the more minor issues I've been worrying over lately is that of Adelaide and Kindergarten.  Our daughter's birthday is in May, making her among the younger children in her class.  She has never shown the slightest signs of lagging behind, but I just can't seem to help it:  I worry.

Is she really ready to be in school all day long?  I wonder.

Maybe she's just not mature enough to start school yet, I fret.

Then I take a look at so many of the other parents whose children are Adelaide's age.  The trend- evidently a nationwide one, at that- is currently to hold your children back a year if you have any reason at all to suspect they might not be ready for Kindergarten.  There are several children in the area, older than our girl, who will now be a year behind her in school.  I've talked to these parents, and they all just seem so self-assured, as if there is absolutely no question that their children should wait another year for Kindergarten.  How could anyone think otherwise?

Then, a few weeks before school started, Adelaide began to say that she did not want to go to Kindergarten.  She wanted to stay home, with me, and go to preschool for another year.

In my favor, I only had one minor freak-out session after she started saying this.  Derek listened, then calmly reminded me why we were sending her to the big bad elementary school.

And although she didn't want to get on the bus that first day, every day since Adelaide has enthused about how much she loves Kindergarten.  When Derek asks her about her favorite part of the day, she says, "Everything- I like everything about school."  When he asks her to tell us about her least favorite, her reply is, "Nothing."

All this has helped to quell my fears, but today in particular, I came across two pieces of evidence that made me feel we have done the right thing by Adelaide (at least, at this point in time and on this particular subject- who knows where else we're screwing up):

First, I read an article in the New York Times called Delay Kindergarten At Your Child's Peril.  It was written by two neuroscientists who, citing several large studies, state that the American trend of delaying Kindergarten for our children actually disadvantages them intellectually and academically clear through high school.  I realize that just because a scientist says something doesn't make it so, but I found the information in the article to be helpful, and for me, the parent of a younger Kindergartener, comforting.

Second, Adelaide brought home a drawing she had completed at school.

-Before I go through and tell you why I was so impressed by this drawing, just let me say that I realize this is no artistic masterpiece.  I am not trying to insinuate that Adelaide is a burgeoning Picasso (actually, this kind of does have a cubist-Picasso feel to it), or a future Van Gogh or whatever.- 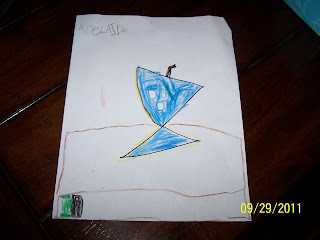 This drawing started as a black zig-zag line printed on the paper, and according to Adelaide, the teacher instructed them to create a picture around it.  She decided to draw a glass of water standing on her bookcase.  What I like about this picture is that it's three-dimensional.  When I look back at the unfortunate art projects from my Kindergarten days, they feature flat tabletops and separated skies- and- grass landscapes.  Flat and two-dimensional.

I also like the ice cubes and bendy straw.

In short (or rather long), I feel much better about the whole Kindergarten issue.  Not nearly so worried.