Men (if there are, in fact, any men that read this blog), don't bother with this one.  I can almost promise you'll be bored to tears.

Ladies, what's the deal with men?  Specifically, men not liking Pinterest?  It's a mystery to me.  But then, I'm not a man.

One of the keys to Pinterest is that you actually have to do some of things that you pin- otherwise it's just a useless time-suck.

And so, here are some of the recipes and crafts from Pinterest that we've tried.  Hopefully you'll either see something we liked and be inspired to try it, or conversely, see some of the things that looked like a good idea but that we found didn't turn out so hot.

Mmmm, this stuff was good.  I loved it, and Adelaide loved it, but the boys weren't too impressed.  You can see in the photo that the caramel is really too light, and mine turned out the same way.  I think there must be some sort of flaw in her recipe, because she admitted to the same thing when she made it.  Still, I loved the combination of salty and sweet, and if you have a tried-and-true caramel recipe, I would recommend substituting that in there.

This chicken is billed as being easy, tender, and flavorful.  I'll agree with the easy and tender, but we found it didn't have a whole lot of flavor at all.  Not bad, but not something we'll be making again.

For these "better" baked potatoes, you're supposed to slice almost all the way through, then stuff with things like butter, onion slices, garlic, spices, then drizzle with olive oil, sprinkle with salt, and bake.  I was expecting great things of these potatoes- and they were a dismal failure.  Tasted like an almost-plain baked potato.  Definitely a fail.

Derek was convinced these were going to be nasty- I think he was scared of all the bananas, carrots, squash, and oatmeal I was tossing into the mixer.  They actually ended up being really good, lightly sweet with plenty of fruits and veggies, and the kids absolutely love them.  They're mini muffins, so I've taken to throwing a bunch in a bag if we're going somewhere and I think the kids will need a snack.  The only variation I made was using quick-cooking oats rather than the oat bran it calls for. These are really easy- you put some yogurt in a sandwich bag, snip off a corner, and squeeze small drops onto a cookie sheet, then stick it in a freezer until the yogurt drops are frozen.  The kids really liked these, but I didn't really see the point.  I thought they tasted like... well, really cold yogurt.  I think I would appreciate these more if I still had to spoon-feed any of our kids; these are probably the kind of food that would be good for toddlers new to the feeding-themselves game.

These sounded so promising: apple rings, dipped in pancake batter, cooked on the griddle, then sprinkled with cinnamon-sugar.  I'm not sure if I just did it wrong or what, but these were kind of a pain to make.  It was difficult to get the pancake batter to evenly coat and stay on the rings throughout the process, and while they tasted okay, didn't really seem worth the effort.

I gotta say, this stuff was way too sweet for me- and I have a sweet tooth the size of Texas.  This was almost sickly sweet.  Nobody really liked it but Adelaide, and even she could only eat tiny amounts at a time.  Never ever making again. 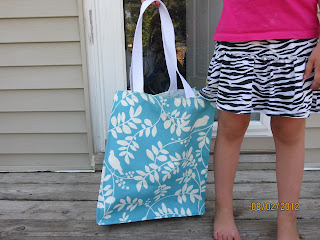 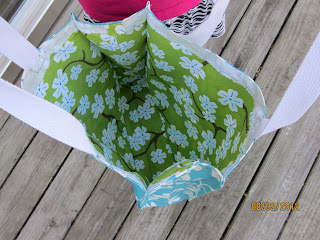 I just made this bag yesterday, and I really have to recommend that you make one for yourself right this second.  I had to wait awhile to make this; it calls for decorator-weight fabric, and I didn't have any on hand.  I finally found the blue exterior fabric in the clearance bin at Jo-Ann's (it was originally $20/yard- who pays that much for fabric?).  It was so easy to put together, and the tutorial gives you the dimensions for two different size options; I went with the larger one because I wanted to be able to use it as a library bag, and we tend to check out lots of books at each visit.  I can't wait to make the smaller one with some different fabric. 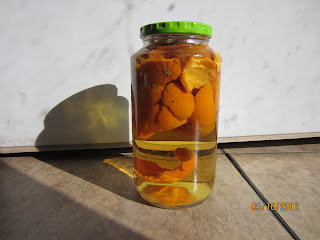 I make our all-purpose cleaner with a mixture of white vinegar, water, and just a tiny bit of dish soap.  It works great, but somebody (Derek) has complained about the smell after I've cleaned a large area with it.  Something about vinegar or pickles or something.  I wouldn't know, I have a terrible sense of smell, and can barely catch a whiff of the stuff.  I thought I had found a solution when I stumbled across this pin, where you essentially stuff orange peels in a jar with vinegar, let it sit for a couple weeks, then make your cleaner as usual.  The cleaner should then have a fresh, citrus-ey scent, rather than the stringent vinegar smell.  I asked Derek what he thought when I was using it (because I sure couldn't tell), and he said it smelled like vinegar with a little orange scent thrown in.  Fail. 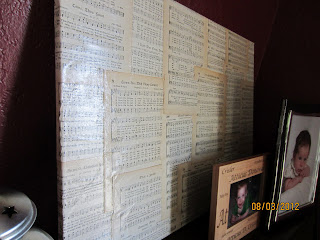 The tutorial for this project comes from one of my favorite crafty/design blogs, Jones Design Company.  I love her taste, and have used a lot of the tutorials she's created to make all kinds of things.  This was the most recent, made with an old hymnal I picked up at a garage sale for $0.50, a canvas on sale from Hobby Lobby, and Mod Podge.  I actually made it at a Pinterest night (a friend of mine hosts these montly, where a bunch of women get together and make crafts they've pinned from Pinterest), and there were several women there who had NEVER USED MOD PODGE.  I have no idea what their childhoods were like, because mine was full of the stuff.  I do plan on framing this and hanging it over the piano rather than just leaving it propped on top, just as soon as I find a super cheap/ not ugly frame for it.

What has everyone else been making?  I'd love to know!