The Newest Addition to Our Family

Derek and I are both blessed to have very generous families.

A prime example of this generosity is our house: much of the furnishings in our home are gifts from either Derek's family or my own.

An example within that example (there's a glitch in the Matrix!) is Caedmon's bedroom, which is entirely populated by furniture that was either mine when I was a kid and thus handed down by my mom, or was gifted to us by Derek's parents and my grandparents.

One of the hand-me-down's is a small dresser that was used by first me, then my sisters, then our older two kids when we were all babies.

When I saw that we were going to need a larger dresser for Caedmon, I put the word out to my family.  My grandparents are big auction-goers, and you never know what forgotten furniture is lurking in some family member's basement.

Within a couple months, the fam (I'm still not clear on who got this, Mom- was it Grandma?  Did you say something about Sherry being involved?  I'm confused, as usual) came through:  my mom and Mark brought this beauty to us on their visit. 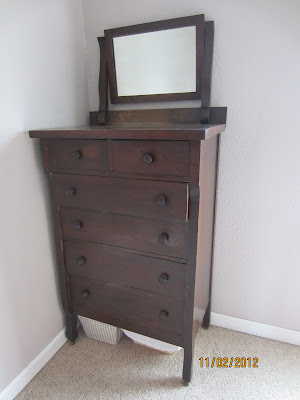 It's old, and it has character, and I love it.

Obviously, it's not perfect.

Does it need to be refinished?  Yes.

Could the mirror afford to be re-silvered?  Yes.

Did I find a bar of soap in one of the drawers that had the unmistakable tooth marks of a rodent all around the edge?  Yes.

Did I vacuum no less than ten spider egg sacks out from the underside of it?  Yes.

But it fit nicely into our budget (FREE), the drawers all work (thanks, Grandpa!), and it's size provides some much-needed storage space.

Did I mention how pretty it is?

Oh!  And it also had this on the back: 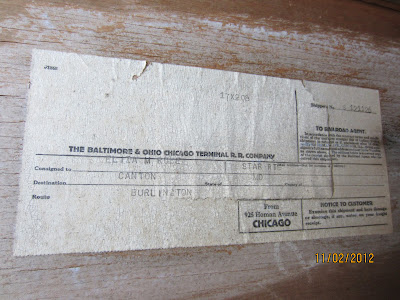 I really have no idea as to the age of the dresser, but after Googling some of the info on the back, I know that the address it was shipped from, 925 Homan Avenue, Chicago, was home to the Sears Roebuck Company in the early and mid parts of the 20th century.  I learned that the railroad it was shipped on saw its heyday in the 1920's.  I was also able to find one Eliza M Rose that lived in Canton, Missouri and was born in 1870.  Is that the same woman whose name is on this packing slip?  I have no idea.  But it's a possibility.

Any research/ antique buffs reading this can feel free to give me some pointers.  I am very much an amateur, here.  Obviously.