The reason behind last week's vacation was the celebration of Derek's folks' 40th wedding anniversary (Congratulations to the Crislers!  The other Crislers, I mean!).  While exploring possible ways to celebrate, they asked Derek and his sister if they could gather their families and meet them in Branson at this super-fancy house the family always stays at while visiting the Ozarks.  (They belong to a vacation club/ time share-type thingy.)  For our part, we hemmed and hawed and thought about it for exactly two seconds before saying, "UM, YES YES YES A MILLION TIMES YES."  Because we love that house.  (Actually, it's a couple rows of duplexes on the edge of Table Rock lake, but the're pretty much identical inside and I hate to call them duplexes because what comes to my mind when the word "duplex" is uttered is most assuredly not what these are.  They're like duplexes on steroids who've been assaulted by an interior decorator.  We still just call them "the Branson house," and everyone in the family knows what we mean.  Also, is the plural of duplex actually duplexes?  Duplices?  Who came up with that word, anyway?  I assume it's derived from "complex," so a complex of two would be a duplex?  I'm sure it's driving you crazy, too.)

Anyway.  I didn't take as many photos while we there as I meant to- I never do- but here are some of our Favorite Things, Branson Edition. 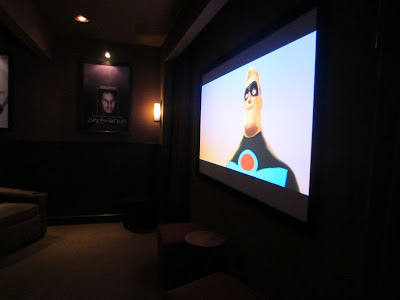 See that?  Not Mr. Incredible; well, that is Mr. Incredible, but that's not the point- nor is that awesome poster of Kevin Costner in Dances With Wolves.  I have no idea who picked which movie posters would go in here, but rest assured it's extremely random.

OH MY GOSH.  It's not random at all.  They're all camping/fishing/wildlife related, continuing the theme of the rest of the house.  This is the kind of thing everyone else probably got about five visits ago, but has just occurred to me.  It's also the kind of thing that prompts Derek to say, "You really shouldn't tell people these things."  Which could really be one of the motifs of our marriage.

ANYWAY.  So that is Mr. Incredible on the screen and the entirely-appropriate Dances With Wolves movie poster next to him, but the point is... 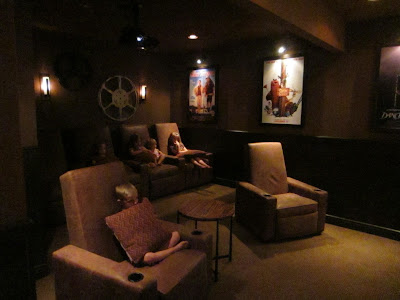 ...there's a movie room in the basement!  Now, maybe some of you have movie rooms in your actual homes, but we definitely do not, so this kind of thing is intensely exciting for peasants like us.

Another favorite is the pool that's a short hike up the hill.  Atticus and Adelaide were afraid to even be carried out to the edge at first.


It's one of those pools that appears to spill right into the lake, but when you swim out to the edge and peer over you find it empties into a trough.  Not like a feed trough (man, words are hard today), but a nice tiled trough with a pump and drain and probably something else to make the whole contraption work.  There was a hot tub that did the same thing.  Lots of fanciness here.

We went mini golfing a couple times.  The boys loved it.  Adelaide brought a book along to read instead.  I was okay with that.

The first course had a pirate theme, with animatronic pirates in the building where you paid and collected your clubs and balls.  Atticus took one step in, freaked out, and had to be slowly coaxed back in.  (It also probably didn't help that when he first looked in the door, he saw a big, wooden pirate, asked Derek if there were any more pirates in there, and Derek jokingly said, "Yeah, right after there," gesturing toward to the two people working behind the counter, upon which Atticus shot out the door.)  He loved the golfing, but was scared enough to skip the hole situated in a cave with a pirate prison cell.

We don't have any photos of our zip lining adventures; they took plenty of digital photos of us, some of which were pretty entertaining to behold, but we thought THIRTEEN DOLLARS PER PICTURE was a teensy bit steep.  And highway robbery.

It was good times all around.  Now it's back to a normal schedule, especially with school starting Monday.  I'm not ready for Adelaide to go back to school.  She decided last night that she is.  The end.