Flowers Stand Still. Children Do Not.


A couple weekends ago we drove an hour south and visited the charming town of Pella, Iowa, to patronise their annual tulip festival, Tulip Time.

Let me tell you what, Pella is a town that takes their tulips seriously.  The festival is always the first weekend in May, and you hear stories about the citizens dumping beer all over their tulips to speed their growth and wrapping them in fleece to slow their growth and spraying diluted Jack Daniel's to prolong their blooming time all in order to try and get the tulips' blooms to coincide with this one weekend.  I feel like I would fit right in with these people- I didn't see a single rabbit while we were there.  If they're feeding expensive alcohol to their flowers, I wonder what measures are taken against tulip predators?  Something positively delightful, I'm sure.

When we first entered the town, Adelaide exclaimed over all the tulips we were driving by and began saying things like, "We should live here, Mom!" and "This looks like the town for us!"  And that was just over the tulips in people's yards and in front of the Pella Windows plant.  It is exceedingly lovely, and not just the tulips- everything, even the restaurants and gas stations, feature quaint architecture, not a tacky strip mall in sight.  Derek's worked in city government long enough for all this to make him observe that Pella might be a beautiful town to visit, but all the city codes that are surely in place to create this unified look might make owning property within the city limits fraught with red tape.

How about some flowers? 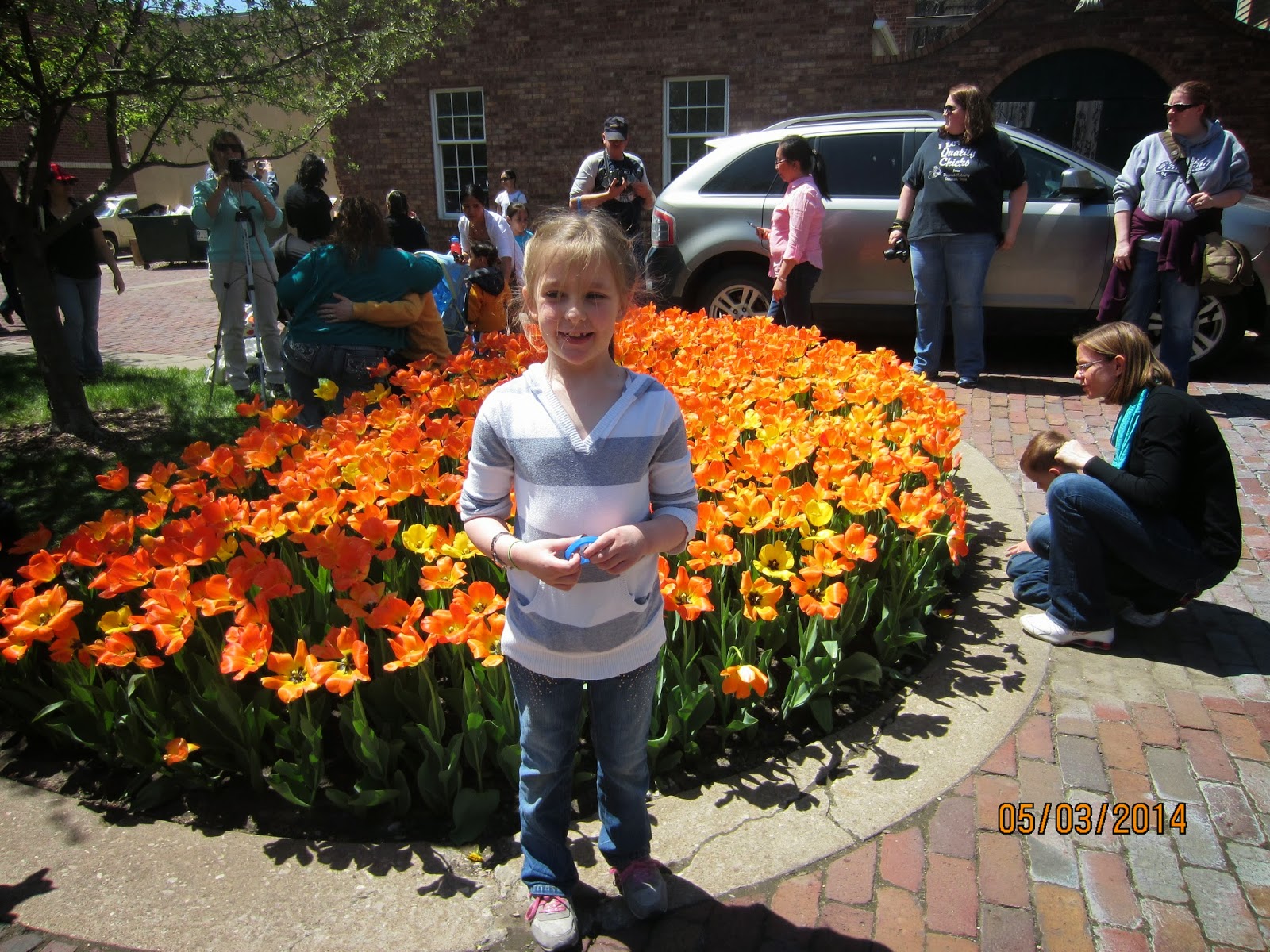 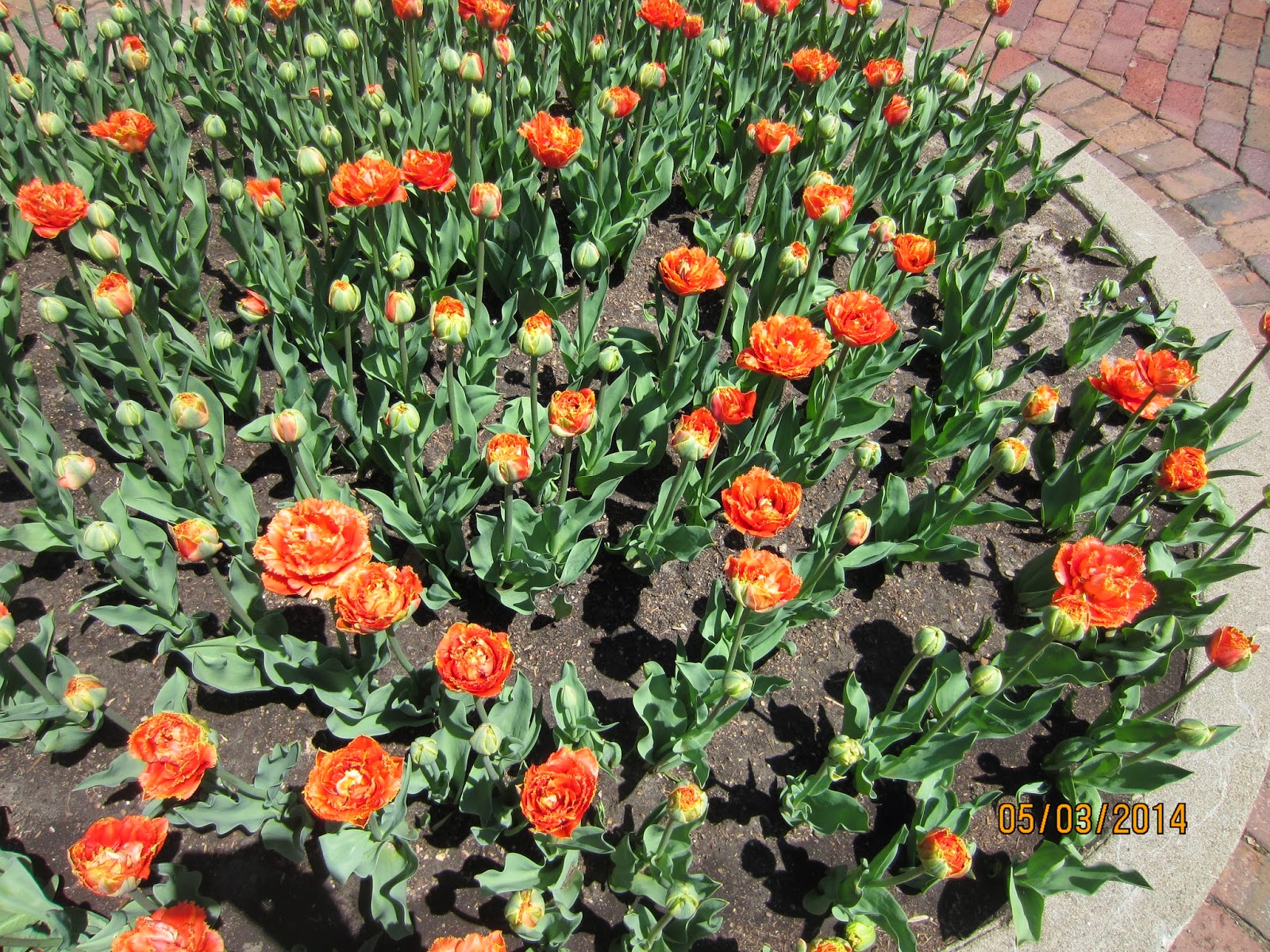 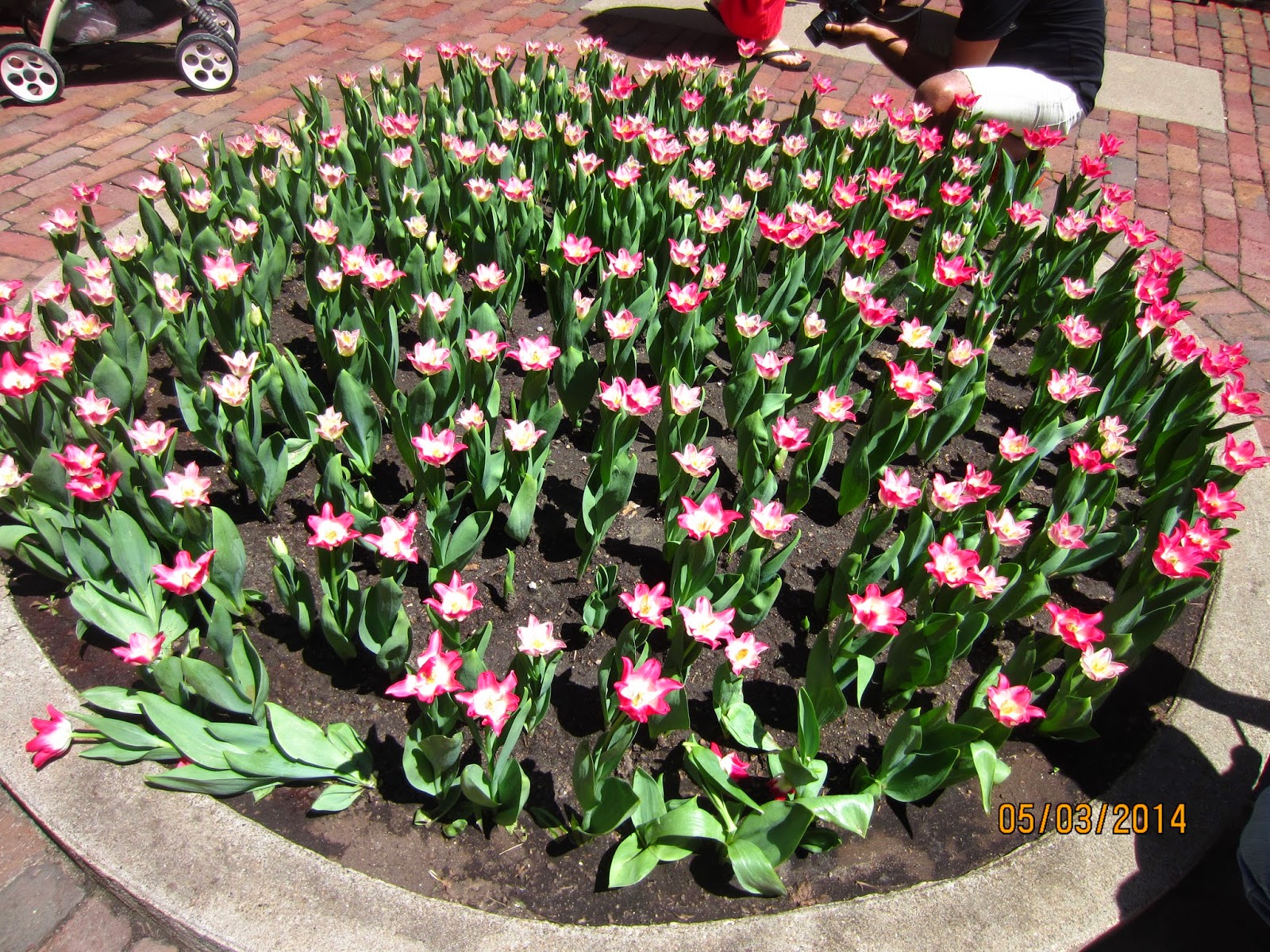 Even with God-only-knows-what-all measures that were undertaken by the city of Pella, there were a ton of tulips that had yet to bloom; our spring has been a couple weeks behind schedule, so I was actually surprised at how many had opened.  There were a ton of people there for the festival, but evidently the city has a steady stream of visitors throughout May just for the flowers. 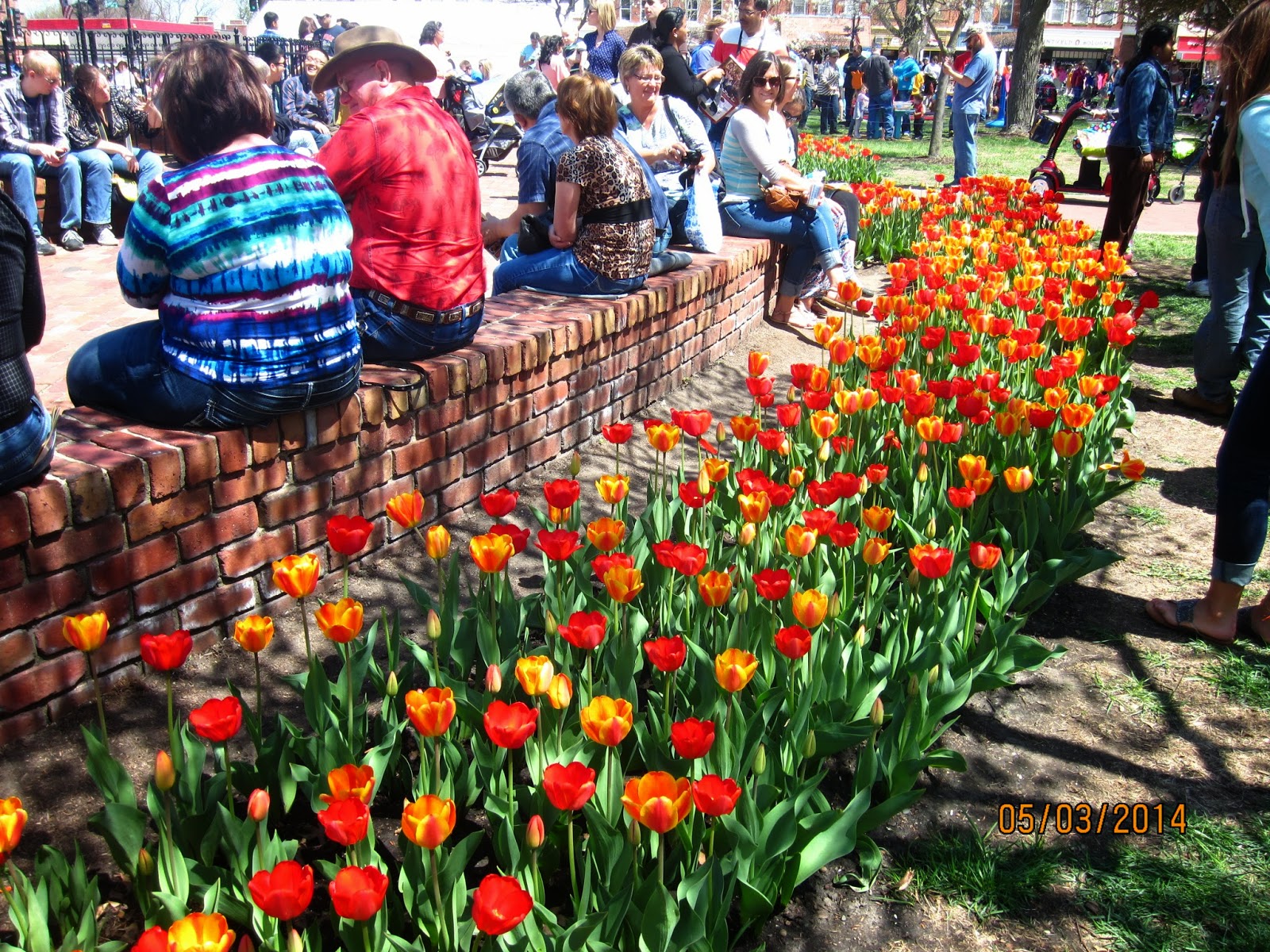 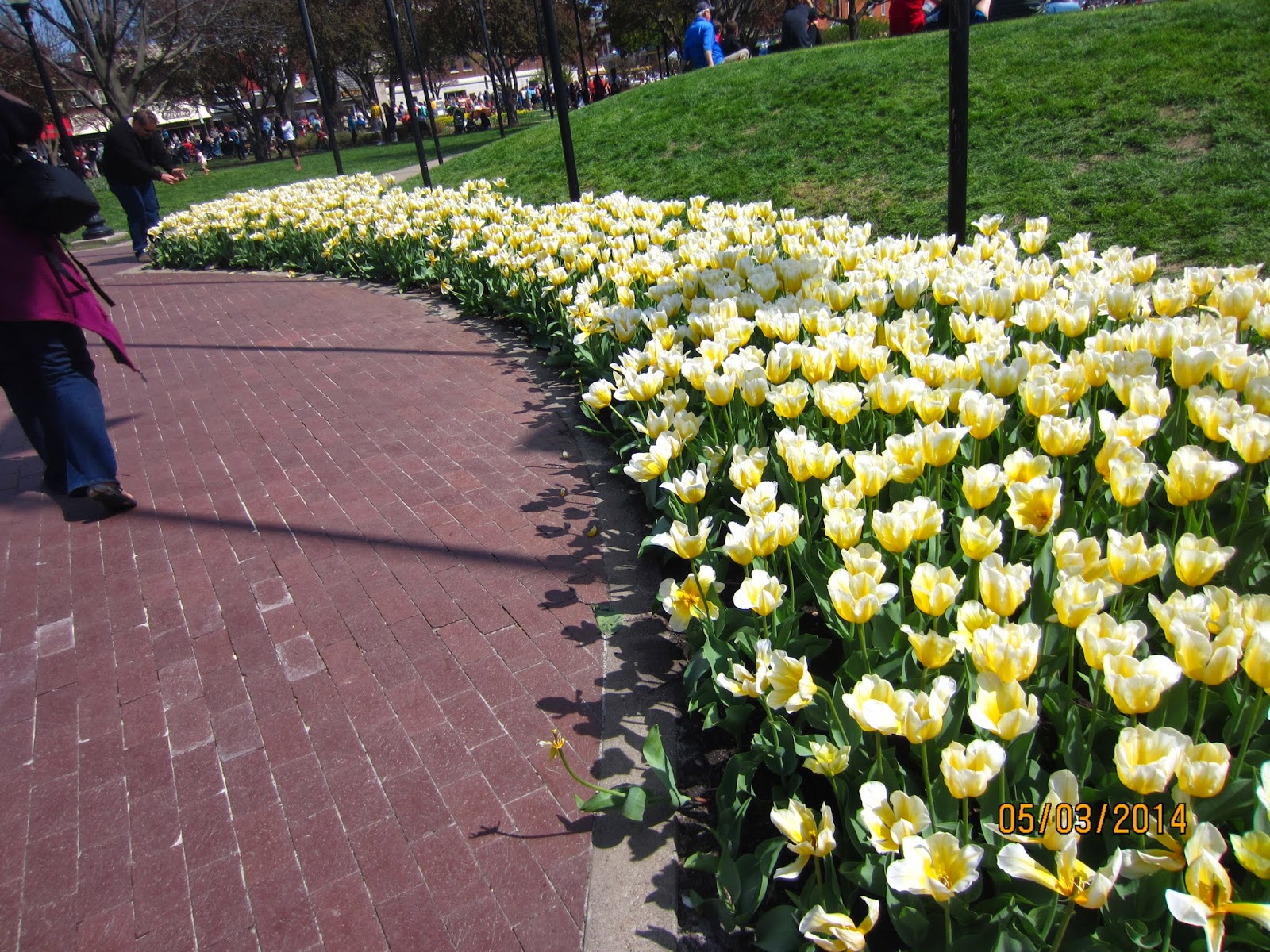 I think the rivers of tulips snaking their way through the town's parks may have been my favorite part.

Tulip Time also serves as a celebration of the town's Dutch heritage, which means there were all kinds of women walking around town dressed in traditional Dutch garb, pushing their adorable babies in tulip-laden prams: 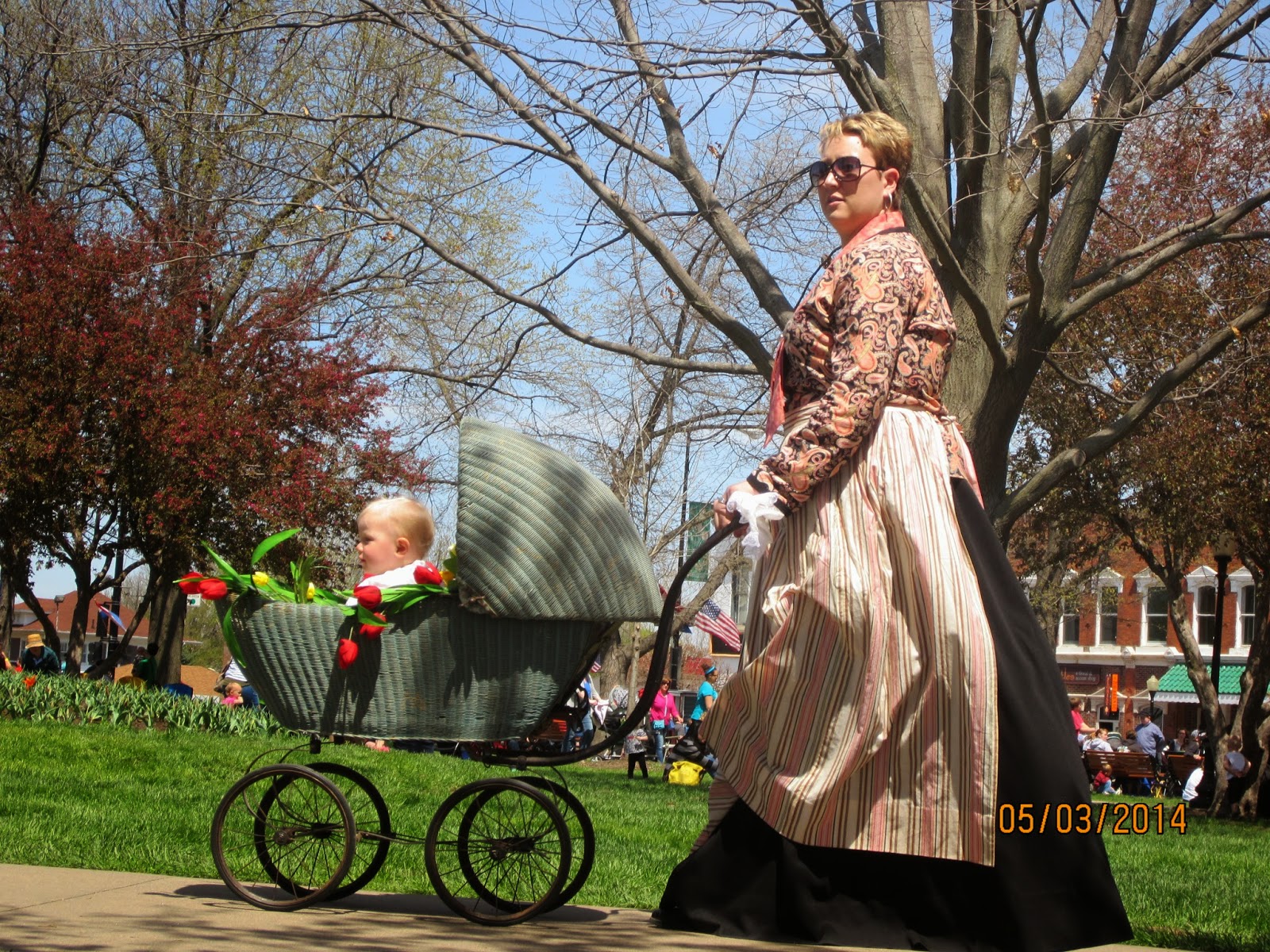 I love the juxtaposition of the old-timey-wimey garb and her thoroughly modern haircut and sunglasses.

We also saw Abe and Mary Todd Lincoln milling around before the big parade: 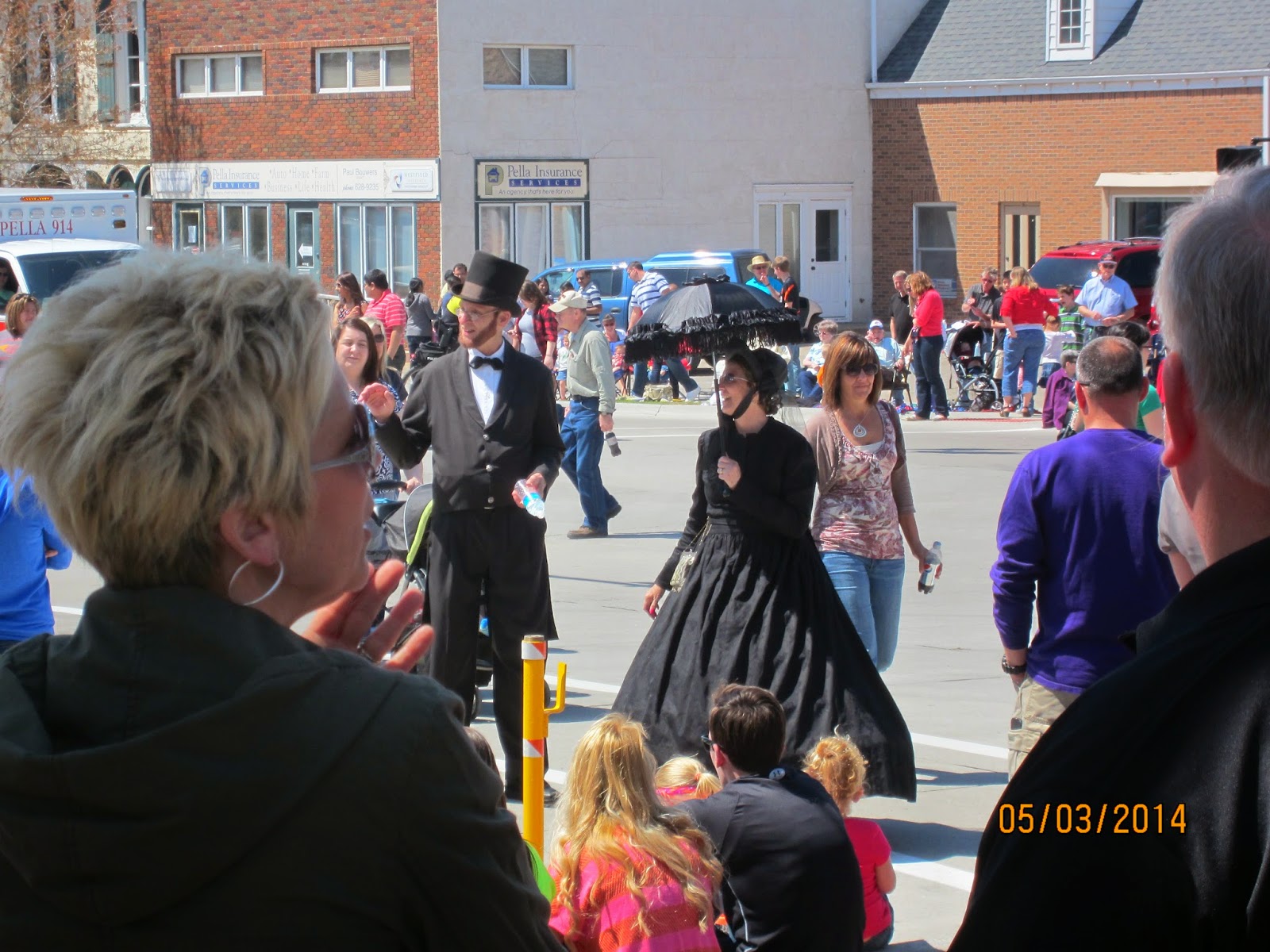 I'm not entirely sure what role they were supposed to play in a Dutch festival in Iowa- I know he was raised in Illinois, and Mary was from Missouri, so... sheer proximity?  They were known tulip-lovers in their day?  Perhaps one of you could enlighten me.  I noticed she was all in black and I wondered which of their children she was mourning.  She looked way less depressed than the rumor-mongers would have you believe, but then depressed people are often good at faking it.  I bet Derek was thinking these exact same things standing right next to me.  I just bet. 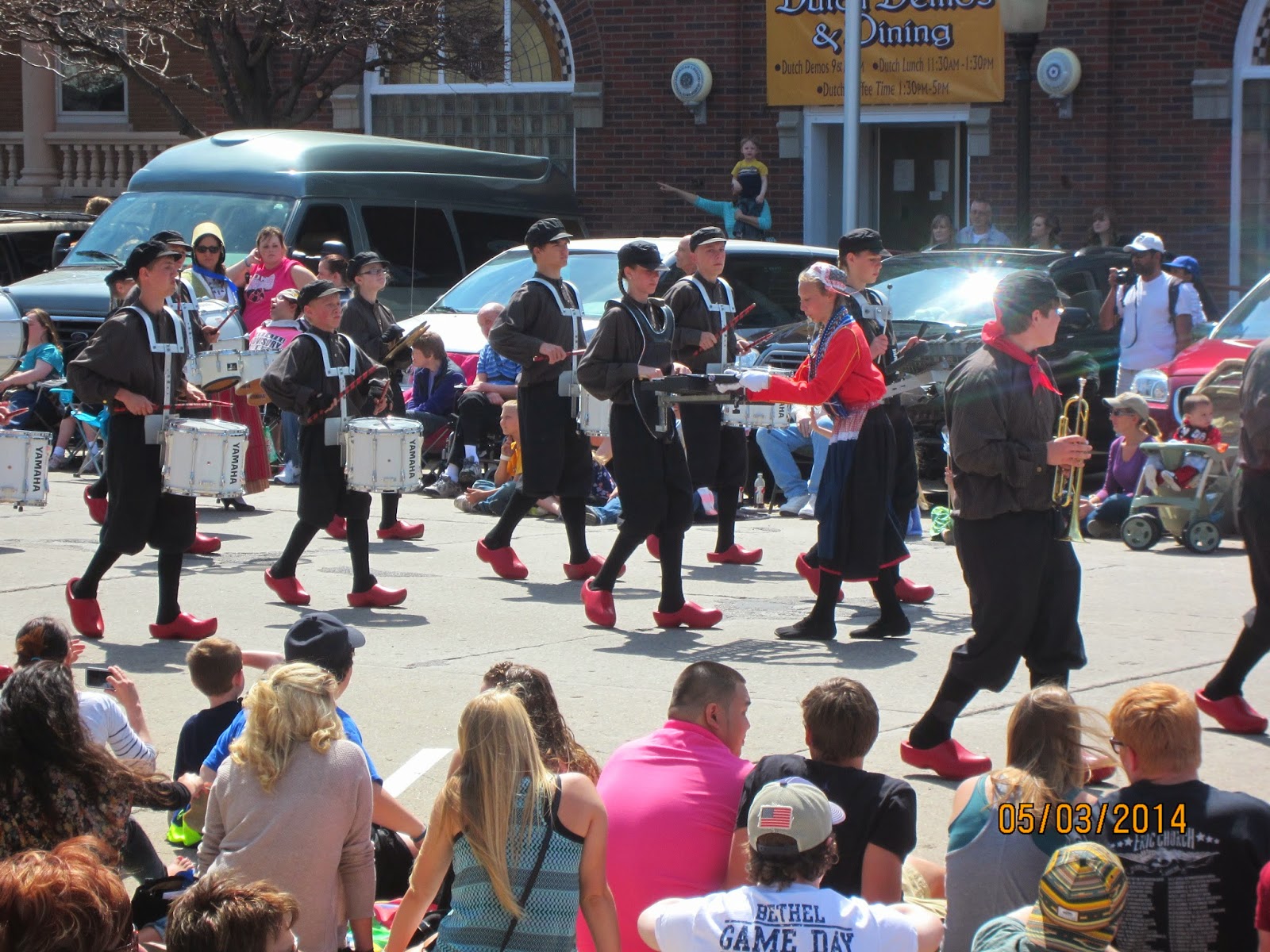 Marching bands are always one of my favorite parts of any parade, but the Pella Middle School marching band was especially fun to watch clomping along in their red clogs.

I also finally got to try a Dutch letter:

Since moving to Iowa, I don't know how many times incredulous natives have asked me, "You've never been to Tulip Time?!" and "You've never had Dutch letters?!"  Or, if they're locals of our little Norwegian immigrant-settled town, "YOU'VE NEVER HAD KRINGLA?!"  Well, now I can claim knowledge of the first two.  For the record, the Dutch letter was delicious: thin layers of light pastry interspersed with almond paste.  I do wonder what the "S" stands for, though.

We also tried yet again to get a few family photos.  Our children are much less compliant than tulips when faced with a camera. 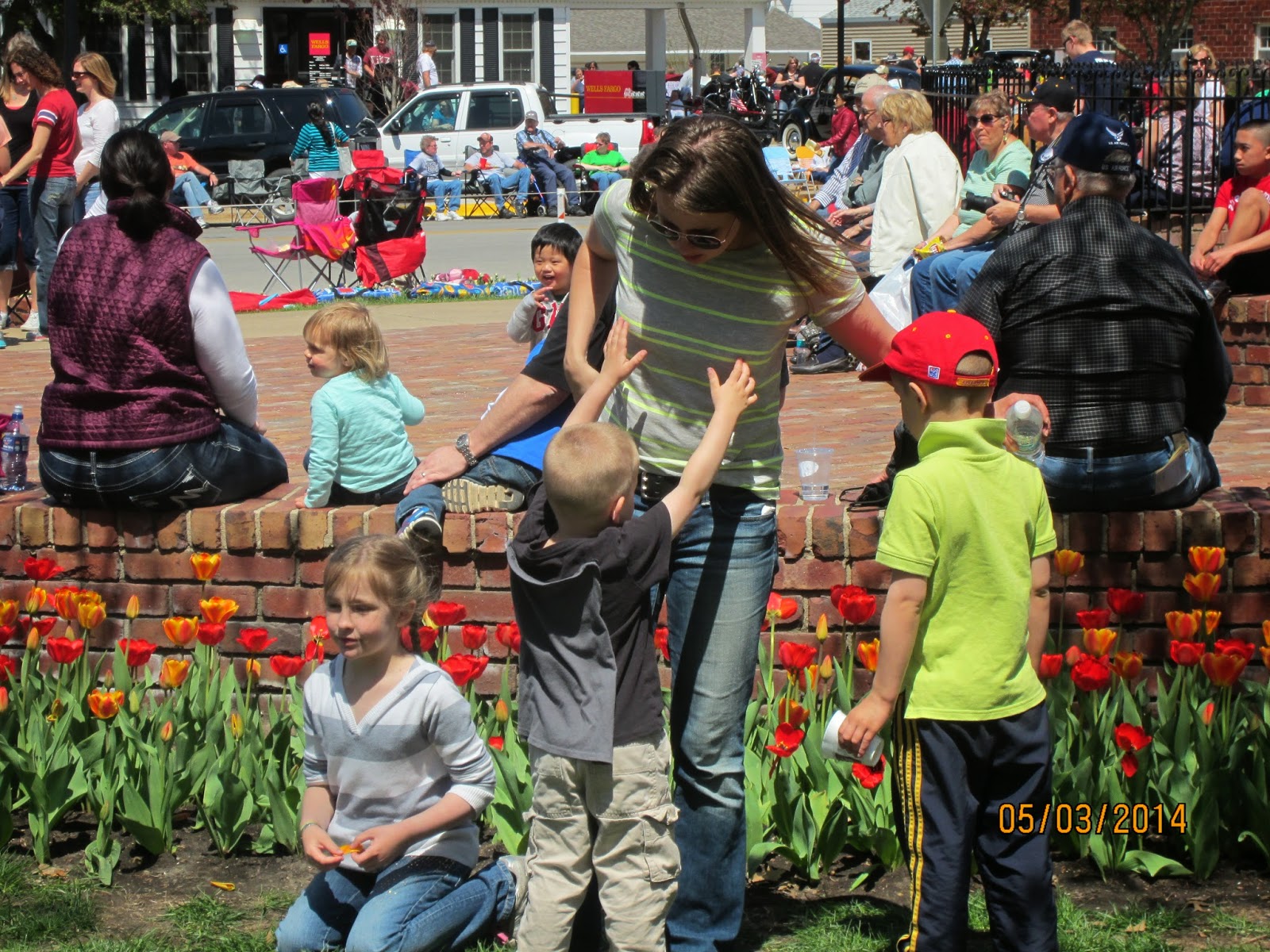 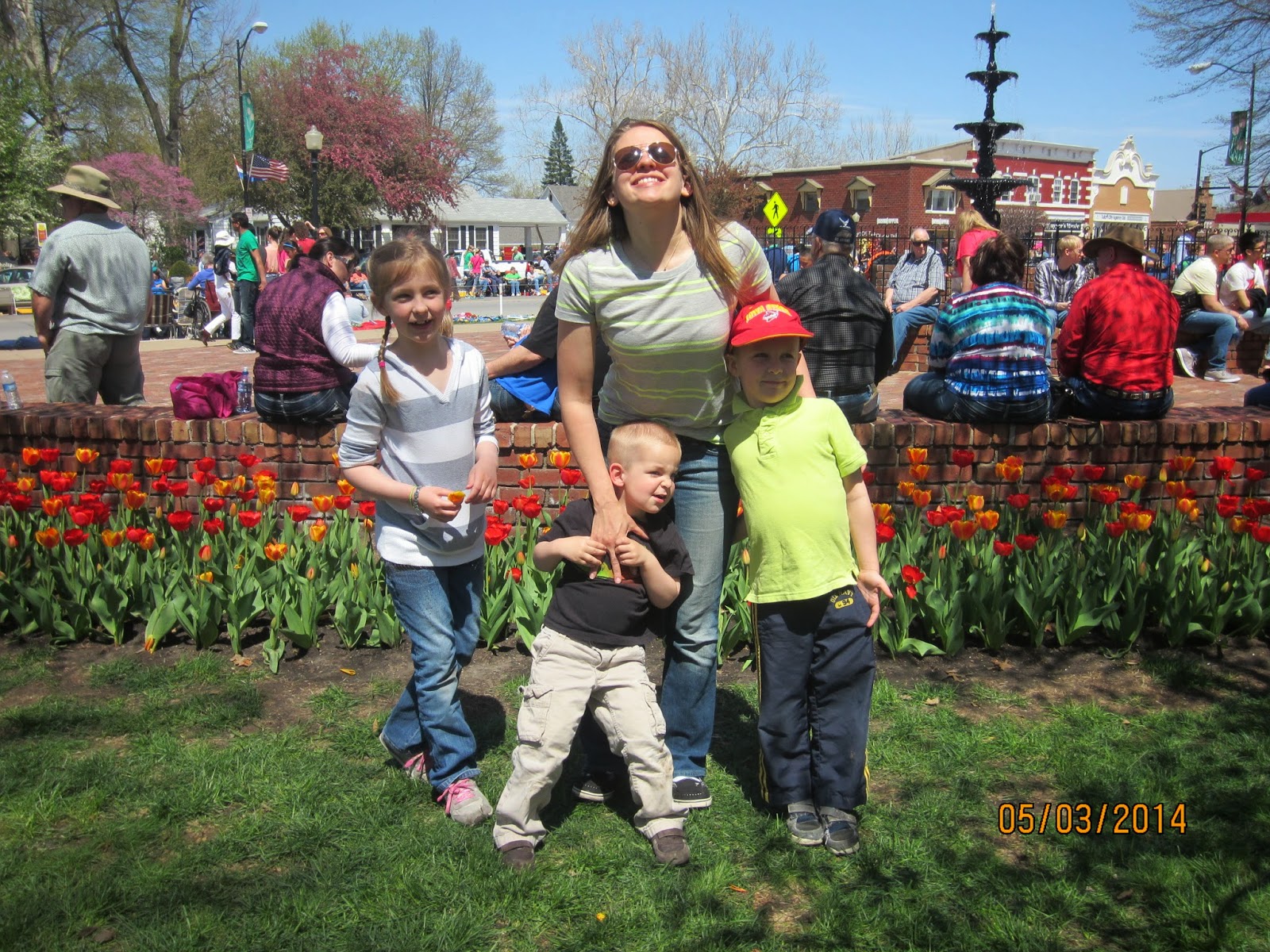 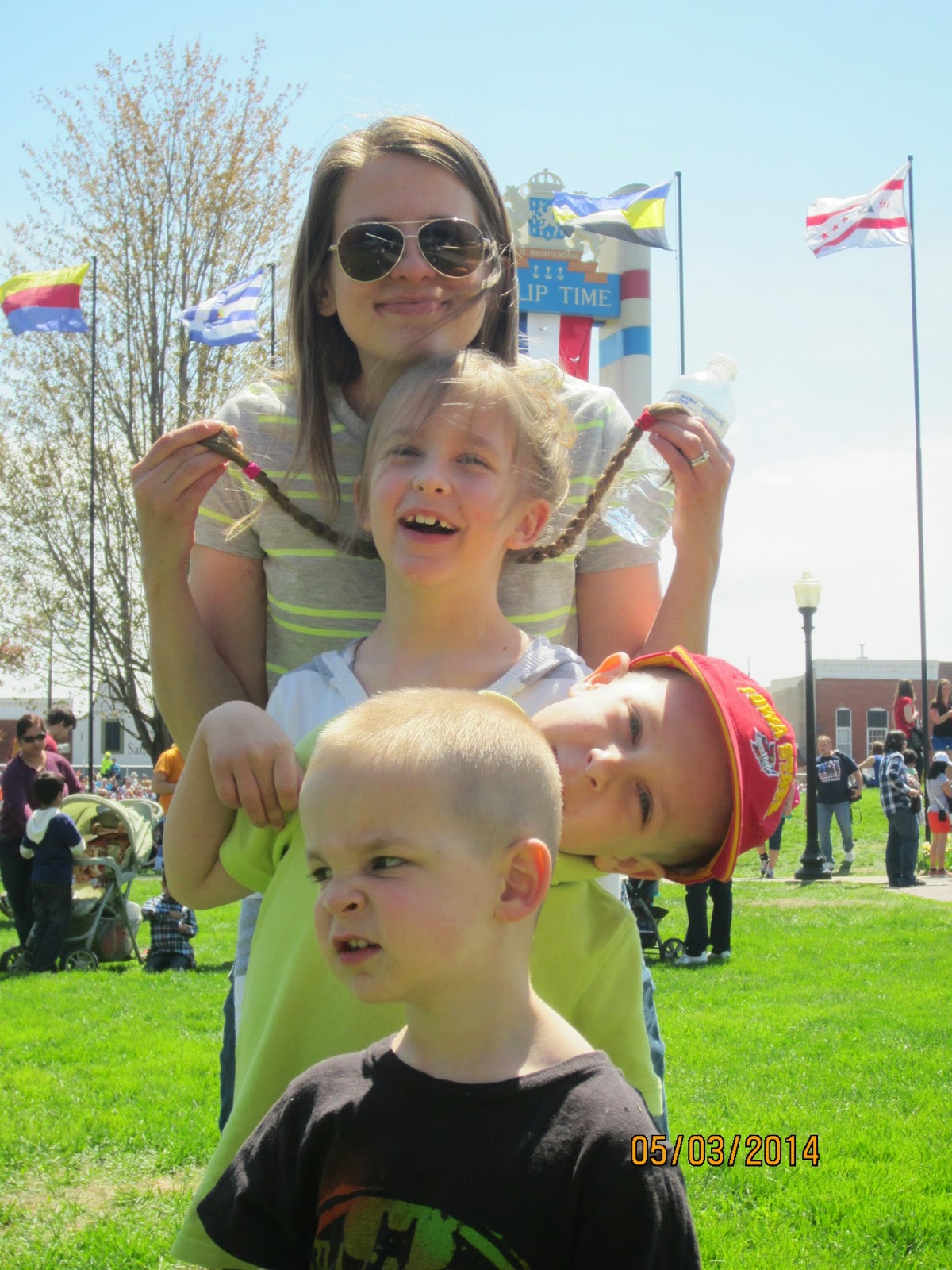 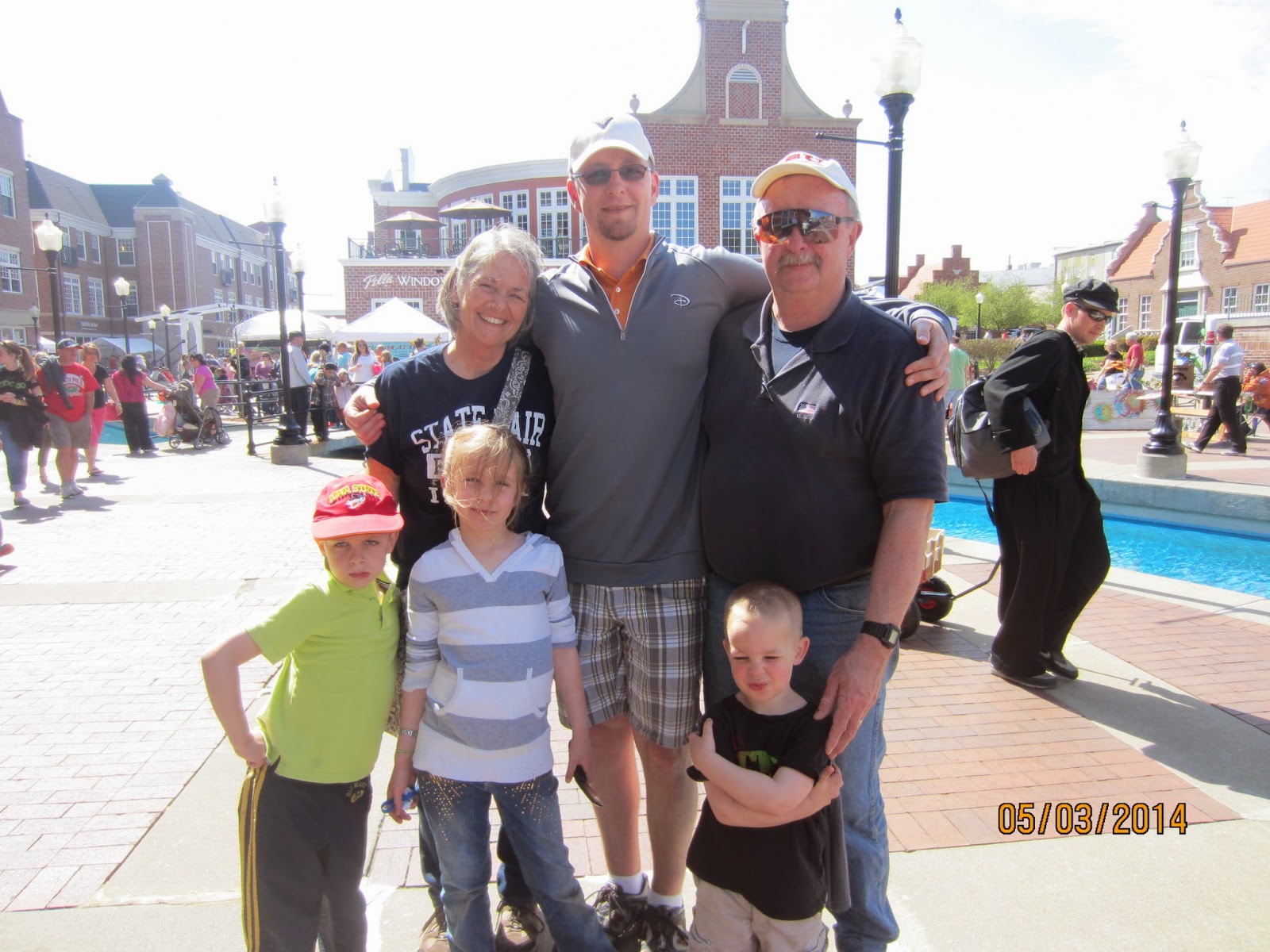 The weather, the flowers, the town, our family: everything was delightful, and I can't wait to go back.