It's that time again, friends: That magical holiday that, more than any other, brings out my desire to be proclaimed the Cheapest of Them All.


For whatever reason, last night was our little town's night to Trick or Treat (also known as "Beggar's Night" 'round these parts- I do not remember this label from my childhood.  Is this an Iowa thing?  An upper midwest thing?  A thing they don't do only in southern Kansas?  What say you?), which actually worked out rather well, as tonight- Halloween night- is supposed to be cold and windy and really rather miserable for walking around with small whiney-ish children.

Adelaide's costume took me zero time to execute, as we already owned all its incipient components. 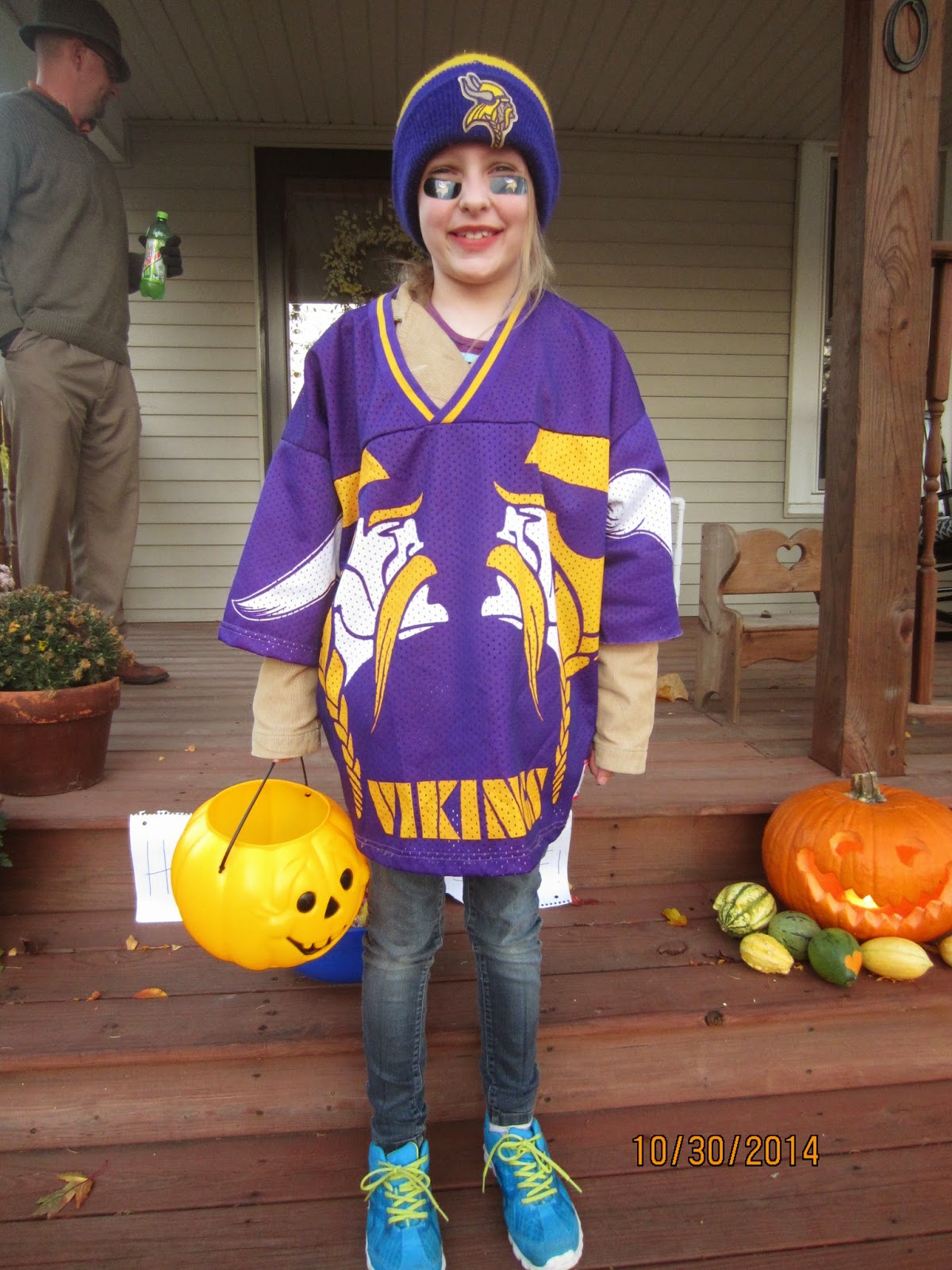 Child:  Adelaide
Costume:  Vikings Fan
Materials:  One of Derek's old Vikings jerseys, one of Derek's old Vikings stocking caps, and stickers meant to look like those black marks football players put under their eyes.  I obviously don't know what they're actually called, but we already owned those, too; they were the souvenirs we picked up for the kids on our recent trip to Minnesota.
Pros:  Easy.  Fast.  Made from materials we already had in the house.  Warm.
Cons:  None that I could see.
Total cost:  $0 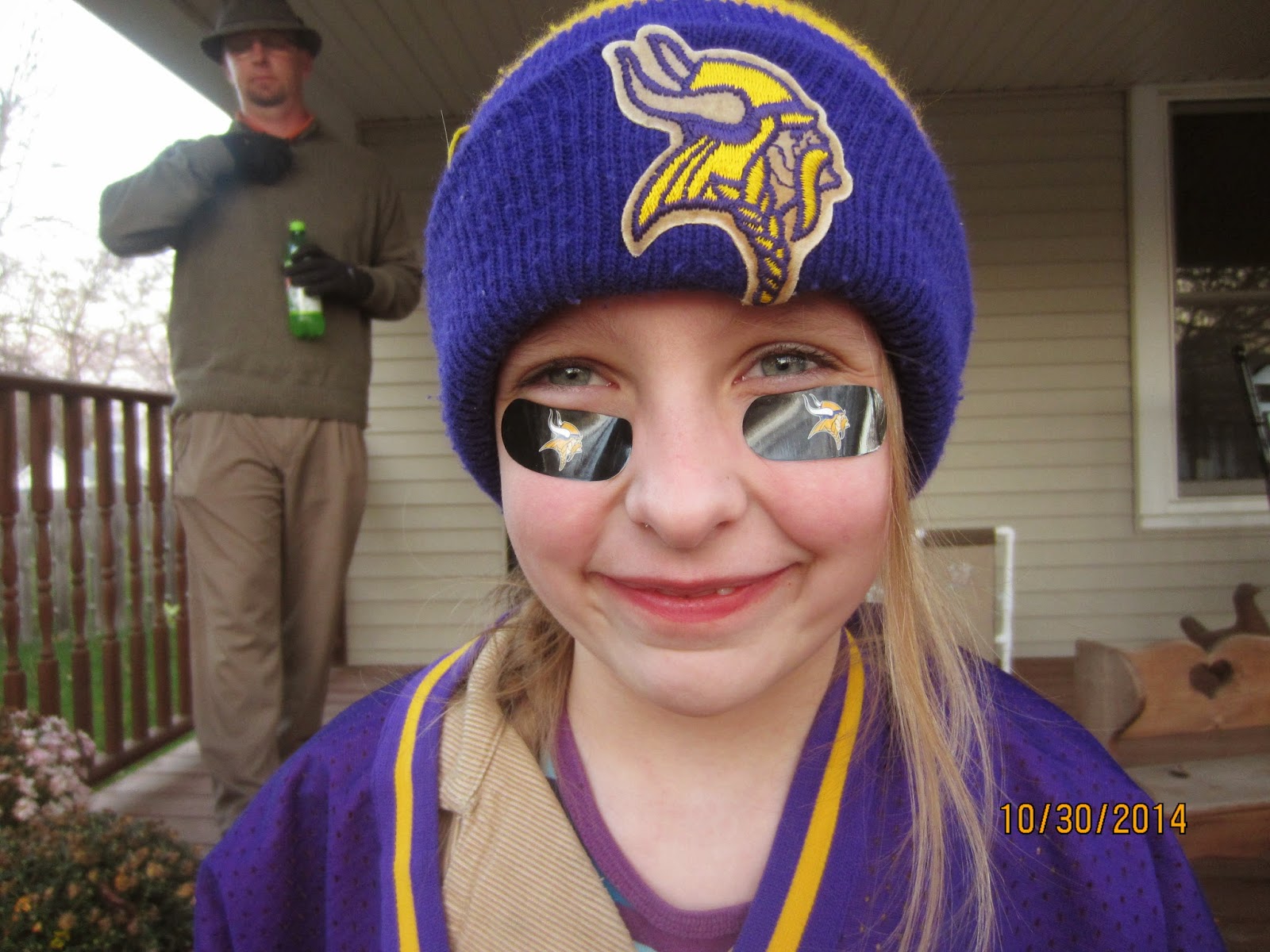 Caedmon decided to be Batman (exactly zero people keeled over in shock when they learned this).  For the record, I offered to finagle some sort of Batman- costume out of clothing he already had, but he was adamant:  He wanted to wear the hole-y, worn, nearly too small Batman jammies he got a year ago for his birthday.  We compromised (read:  I cruelly imposed my will upon our poor, abused son) and he wore regular pants with the pajama top, as I didn't believe his four-year-old bum needed to be exposed to the October evening air via the aforementioned holes.  After I had broken his spirit, however, it was relatively easy to force him to wear another shirt under the Batman top for warmth. 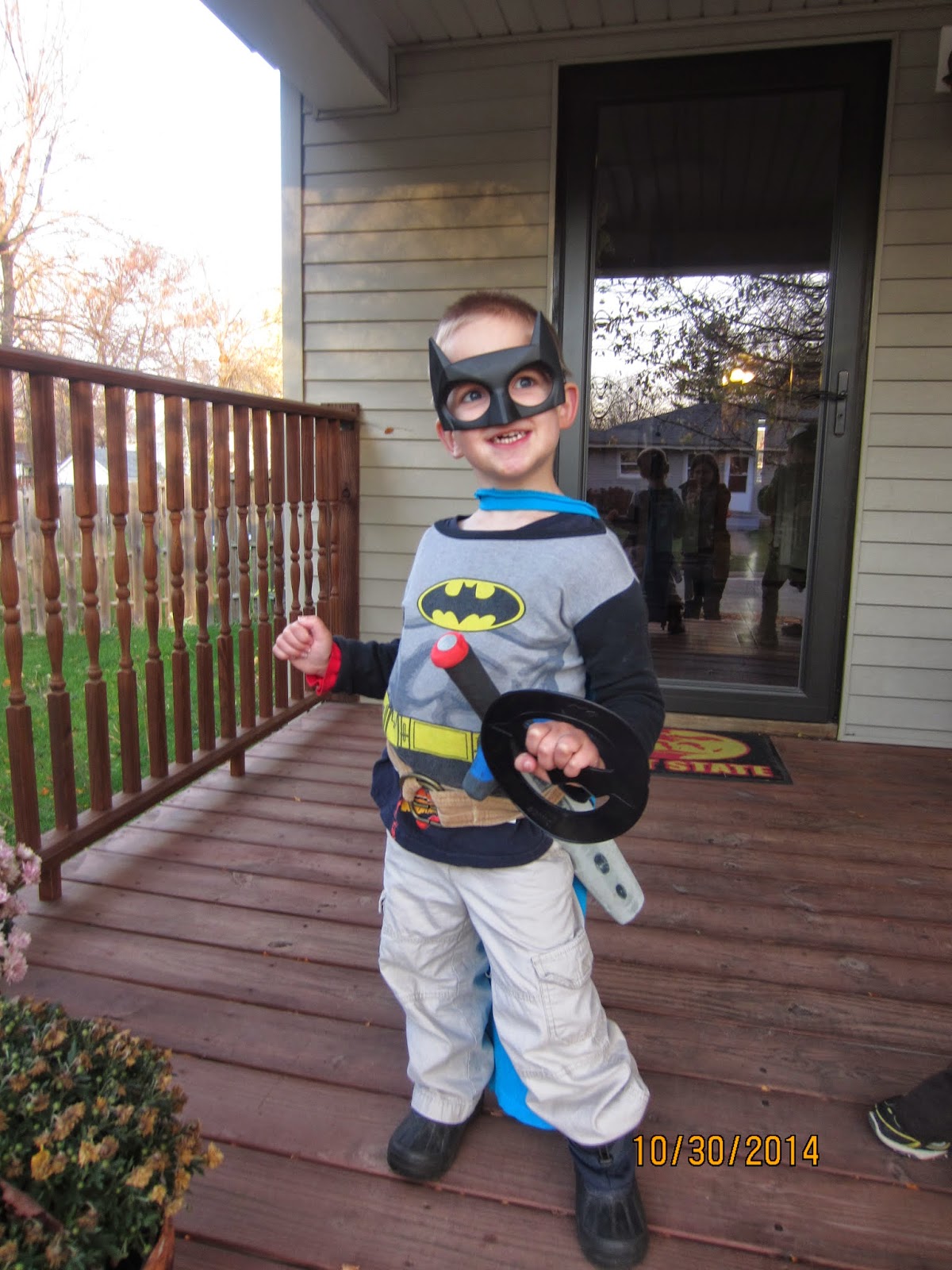 Child:  Caedmon
Costume:  Batman
Materials:  Batman Pajama top, t-shirt cape I made last summer, Batman mask-glasses-thing borrowed from a friend (thanks, Shayla!), Batarang that I think was a kid's meal toy or something, toy sword we already owned which he insisted on carrying despite Atticus's stance that a sword is not, in fact, part of Batman's arsenal, random belt he pulled from my drawer for holding that sword.
Pros:  Easy, fast, warm, Caedmon was pleased with it, we already owned all the pieces except the one that was kindly loaned to us, plus Cade can make just about anything cute.
Cons:  It looked like a costume that had been thrown together from disparate elements, probably because that's exactly what it was.
Total cost:  $0. 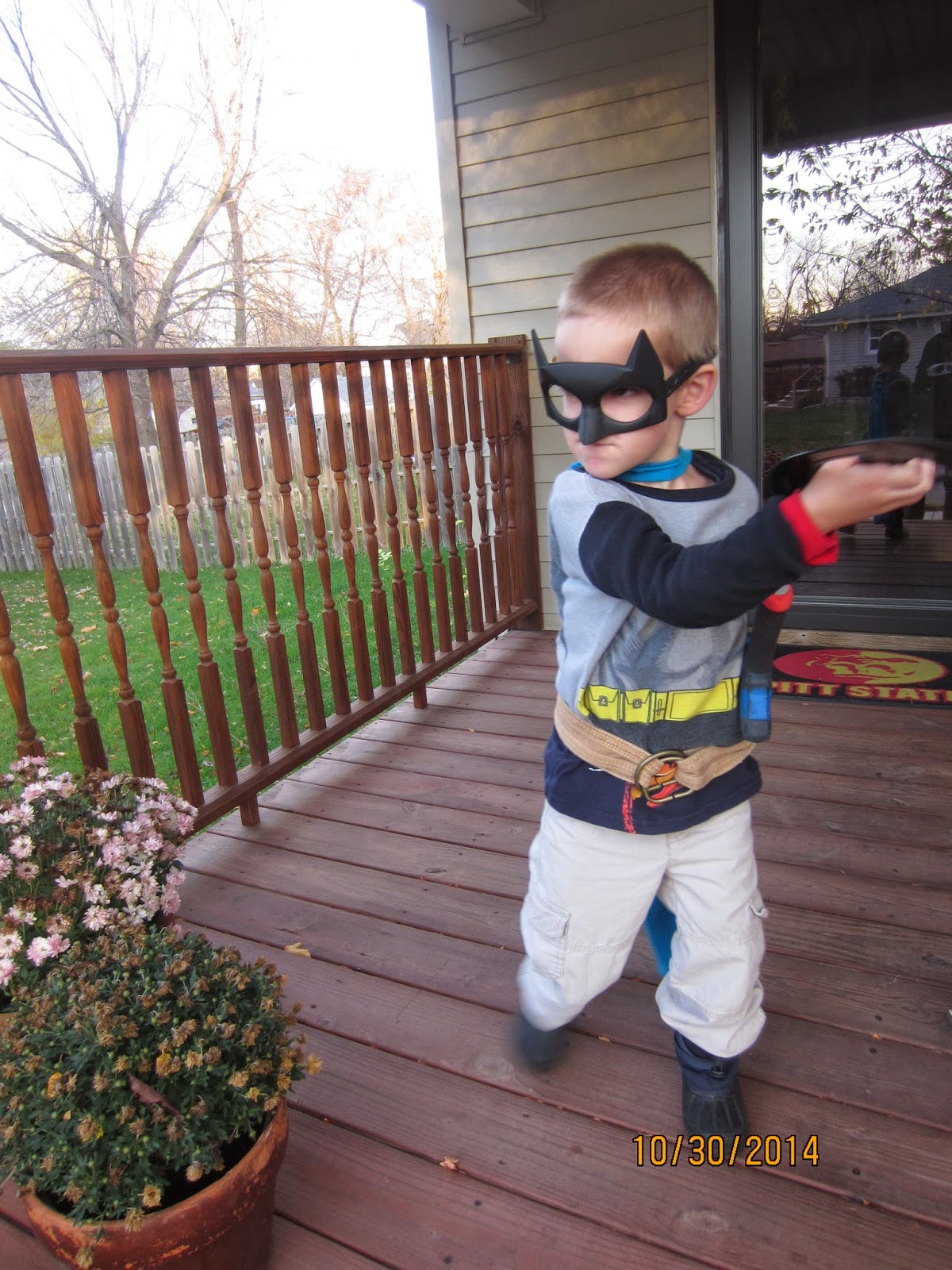 I mentioned a couple weeks ago that I was afraid Atticus's costume was going to turn into Robin Hood in Drag, and never was this fear so real than yesterday when dressing him in all the random items of clothing I'd dug out of my scrap fabric bin, hoping enough green and brown layers would magically turn him into a robs-from-the-rich, gives-to-the-poor woodsman.  Mercifully, by the time I'd added all the little accessories, it ended up working rather well, although there was a bad moment when Atticus was freaking out a little about wearing his sister's leggings; he had no pants that I deemed worthy of the rest of the costume, but it turns out six-year-old boys care very little about whether or not their pants "go" with the effect their mother is trying to achieve.  I did some very fast talking about how Robin Hood lived in the woods and needed lots of layers of clothing to keep warm and all these (um, women's) clothes were exactly the type of thing Robin Hood surely wore.  He, thankfully, believed this claptrap. 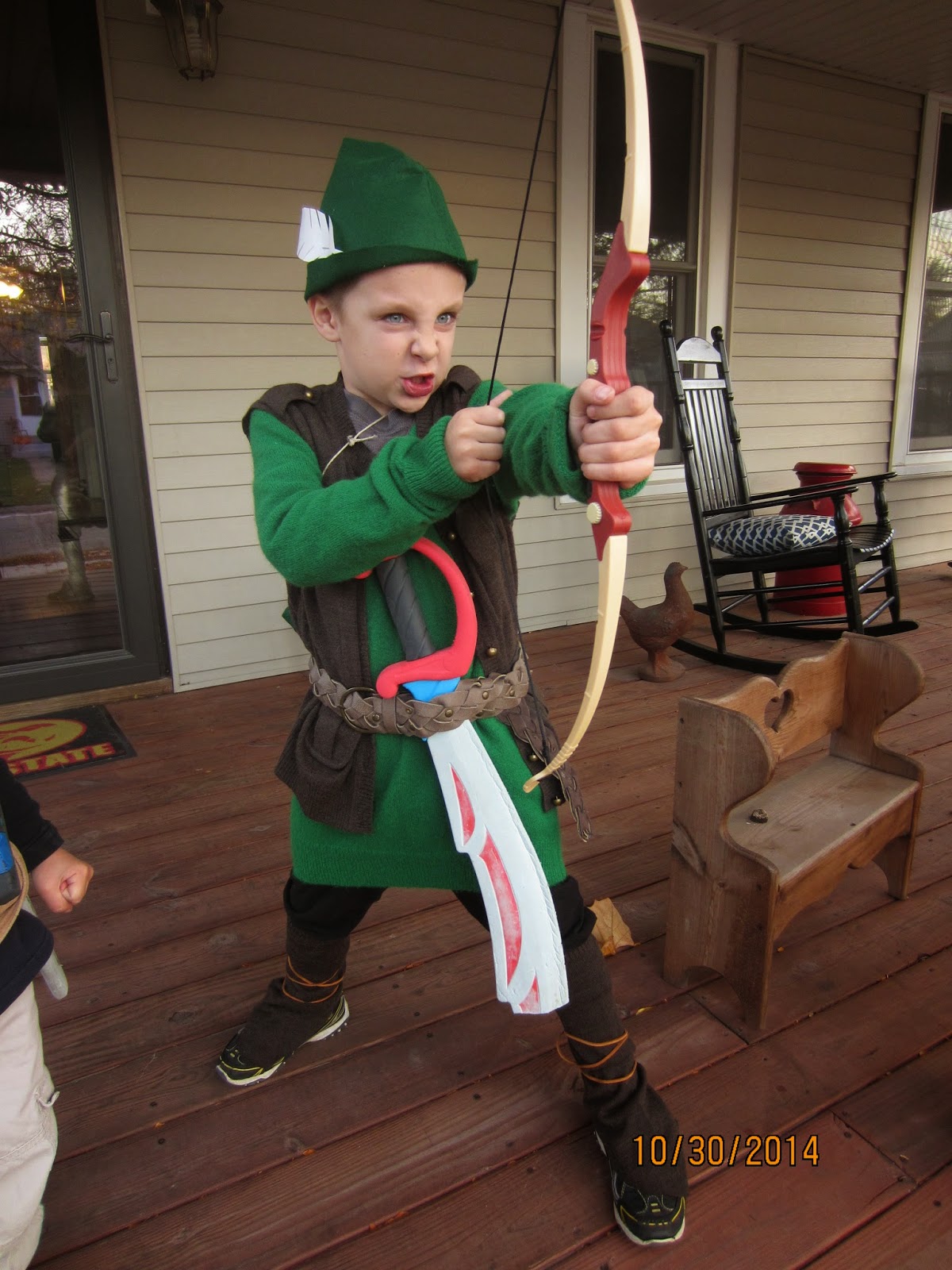 Child:  Atticus
Costume:  Robin Hood
Materials:  Green Goodwill sweater I bought years ago for some long-abandoned craft, black leggings of Adelaide's, brown cardigan that was once mine, but which the, uh, washer shrank (yes, that's why it's too small now... the washer did it), but I couldn't bear to get rid of because I still loved the fabric; for the costume I cut the sleeves off to make a vest, then took the sleeves and pulled them on over Atticus's feet to partially cover his tennis shoes and further the scrappy-woodsy look, tan cord randomly wrapped around sleeve-leg warmer-things, left over from another long ago craft project, braided belt of mine I bought at a garage sale for $0.50 a couple summers ago, paper towel tube for quiver to hold (broken) arrows, leftover felt rubber banded on the bottom, twine threaded through to wrap around Robin, hat sewn by me via this helpful tutorial, although I had to use more felt than it called for, as our children have large adult-sized heads, feather in hat hurriedly cut by me out of paper ten minutes before we left and pinned to hat, bow and arrows a past birthday present, broken sword also a past gift.  Whew.
Pros:  Cute as a button.  Already owned everything but two of the three pieces of felt needed for hat.  Warm.
Cons:  Took me around 30 minutes to make the hat, then another ten whole minutes to put the outfit together, five minutes more than the other two children's costumes.
Total cost:  $0.54 for the two pieces of felt. 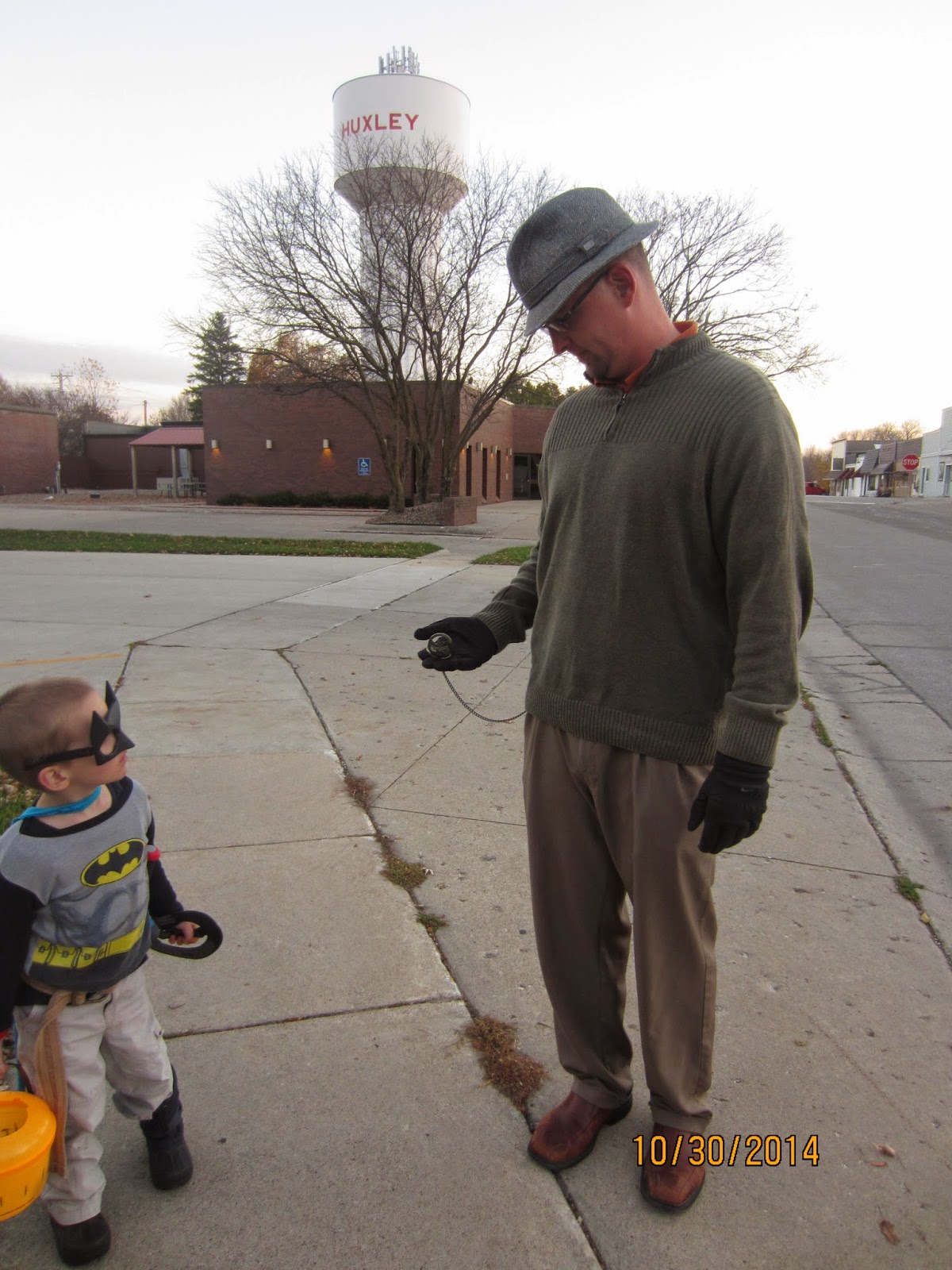 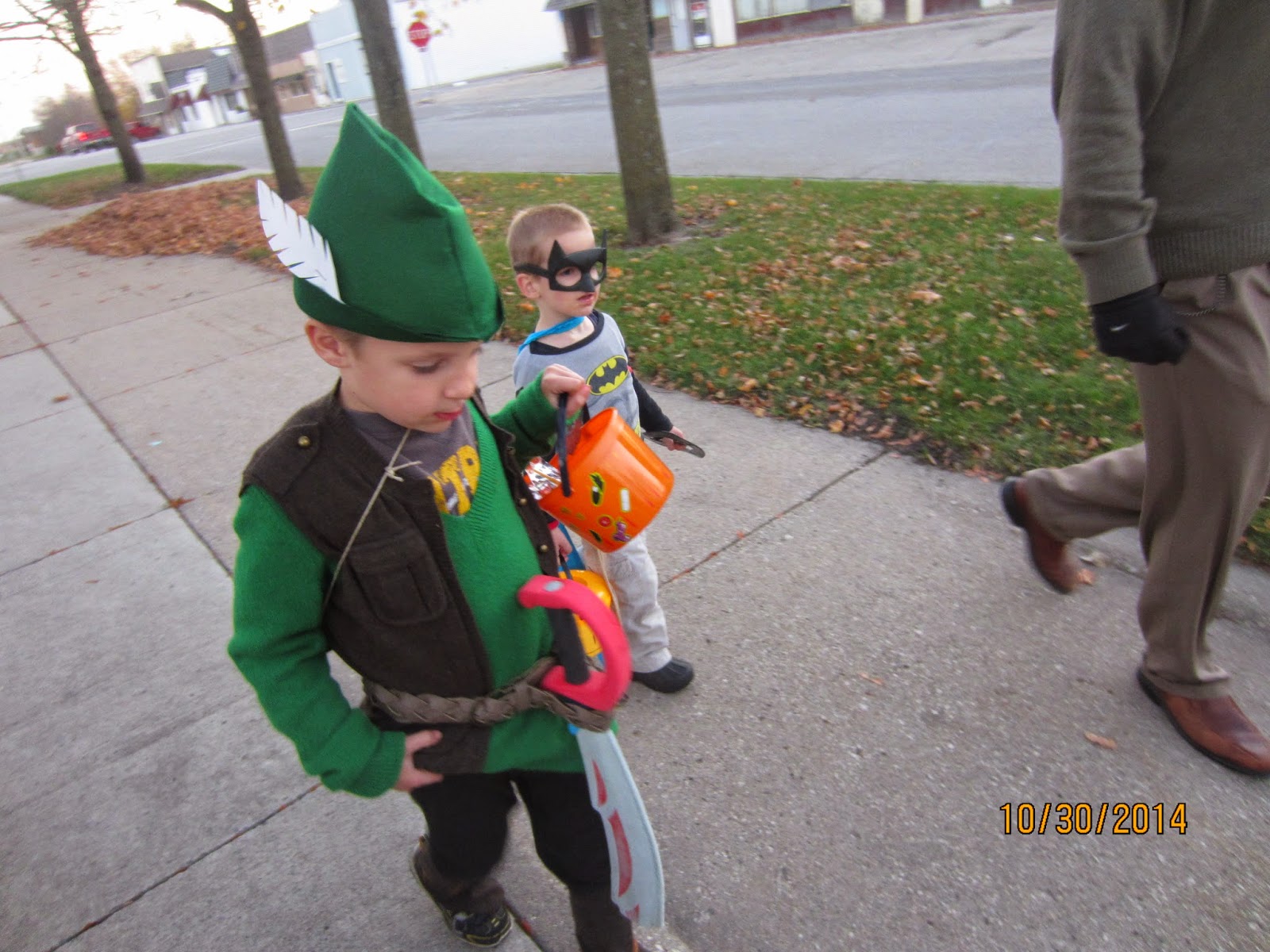 Candy was gathered.  Cute children were observed.  Trick or treating done in one hour, both boys asleep within another thirty minutes, Adelaide off to bed after stern warnings to both parents not to eat her M&M's.

I'm going to declare this a successful Halloween Most Frugal, so I can get on with the important business of stealing our children's candy.