Sunday night we got back from our trip south, and checking in after four days away from the internet resulted in me finding out/being reminded of all the things I had going on this week.  They were all good things, but they made me want to crawl in bed and pull the covers up over my head.  I'd just spent the past several days peopling, and I couldn't people anymore.  I spent the week channeling Rabbit and crying, "Nobody!" anytime any of my well-meaning Winnie the Pooh's asked "Isn't anybody at home?"  I would apologize, but believe me when I say it is for your own safety that I recuse myself at times like these.

Still, stuff did happen this week. 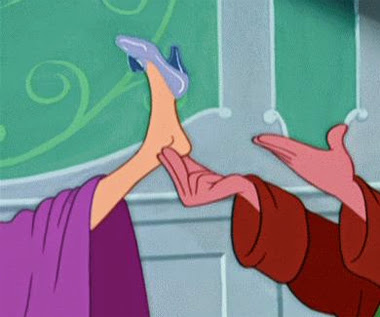 Except I most likely won't kill anyone as a result of my frustration.  I'll probably just go buy them new boots to outgrow in another six months.

Derek and I dragged Caedmon around most of the day Tuesday shopping for new appliances (a post all its own for next week- I know, appliance blogging!  Things are about to get cray-zeeeee!), which prompted him to desperately ask, "Are we ever going home?" right around noon and our fourth stop of the day.  I remember being goose-stepped around Lowe's with my parents when I was a kid; I did not handle it as well as Caedmon did, possibly because I did not derive joy and entertainment out of opening and closing and opening and closing and opening and closing washer and dryer doors.  The salesmen loved us, I'm sure.

The above gif has nothing to do with Caedmon, but is instead the way I imagine each of your faces looked when you read the words "appliance blogging."  You guys are hilarious.

Wednesday I broke the fridge.  Don't worry, Derek fixed it Wednesday night.  It turns out our fridge is like those divas who insist on Evian And ONLY Evian, Do Not Bring Me Any Of That Ozarka or Poland Spring Water, I Can Tell The Difference, except with the water filter.  Or it might be that I'm supposed to pay attention to the giant arrows on the fridge and filter and line them up.  Whatever.

Wednesday I also forgot our children.  But only two of them!

See, what happened is this:  Every Wednesday the school has an early out, and I spent the morning thinking it was Tuesday, so when a friend called that afternoon, I assumed she was asking me to pick her daughter up from the bus stop along with our kids, but her first few words, "It's Wednesday, and the kids have an early out" had me springing off the floor and freaking out because IT'S WEDNESDAY AND LIKE 15 DEGREES OUTSIDE PAAAAAAANIC, but thankfully she came to the rescue and Atticus and Adelaide were delivered to our front door via the safety of a warm car maybe 90 seconds later, which is better than they would have gotten if their own mother had been on top of, you know, their survival.

It's nice to think that this is the kind of thing I would Mother Torture myself over but the kiddos wouldn't even think twice about, but I can already tell that's not the way this is going to go.  That night at supper both the A's Worst Things involved that day's abandonment (every evening at supper we do Best Thing, Worst Thing where everyone gets a turn to share the best and worst part of their respective days, and oh, yes, the word "abandoned" was actually used).

The one redeeming part of Wednesday was this book I got from the library: 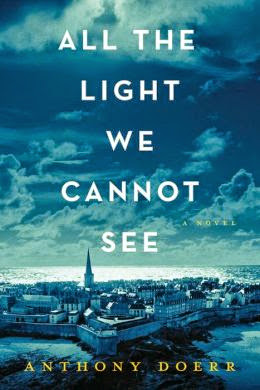 It's WWII historical fiction whose narrative flip flops between a blind French girl and a German orphan boy fascinated by radios.  I'm about 100 pages in and it's excellent so far.  Thanks for recommendation, Deanna!


And just to round out the week: 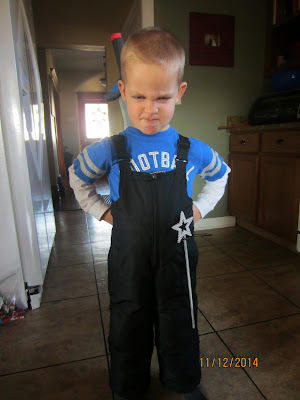 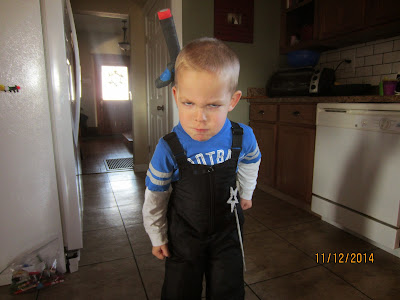 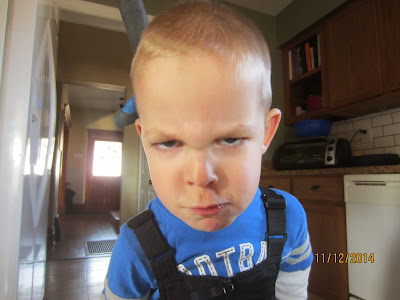 This guy's spent the week in his snow pants, foam sword tucked into the back of his shirt, princess wand safely in a belt loop for easy access, running around the house yelling, "Fierce!  Fierce!  Fierce!" while brandishing the bedazzled wand at imaginary foes.  This makes me collapse in helpless laughter, because really, Fierce + Glittery Wand Accessory can only equal some sort of Project Runway Superhero and I know this is the very antithesis of the effect he's going for, especially when he tells me the wand shoots dragon fire at bad guys and BURNS THEM TO DEATH (emphasis his).

How I see Caedmon this week:

How he sees himself: