The Right Thing To Do

Last Friday afternoon, I was faced with a bit of a dilemma:  Stay home in our warm, cozy house with our three children after school, maybe read a few books with them, leisurely prepare the French Dip sandwiches from the roast that had been deliciously scenting our house while cooking in the crock pot all day; or, go to the apple orchard in the 40-degree, windy weather with three kids who had been sick for the better part of a month.

I chose the orchard, not just because I hate myself, but also because Adelaide had received free passes to the orchard over the summer, and we'd been meaning to go all autumn, but, well, there's always been at least one of us who's been ill- only then I found out the farmyard/ joy-inducing part of the orchard was closing Sunday, knew we weren't going to have time to go Saturday or Sunday, and that Friday after school was it, our only window to go.

It was even worse because I knew Adelaide wouldn't complain if we didn't end up going.  I had warned her we probably wouldn't be able to make it, and she did her sad, put-up-a-brave-front face that's about a million times more guilt-inducing than any whining or tantrums, and maybe you're good with playing Miss Minchin to Adelaide's Sara Crewe, but I'm not quite that heartless.  Except first thing in the morning.  And right around 5 o'clock nearly every single day.  And really anytime I've waited too long to eat.

And it turned out great. 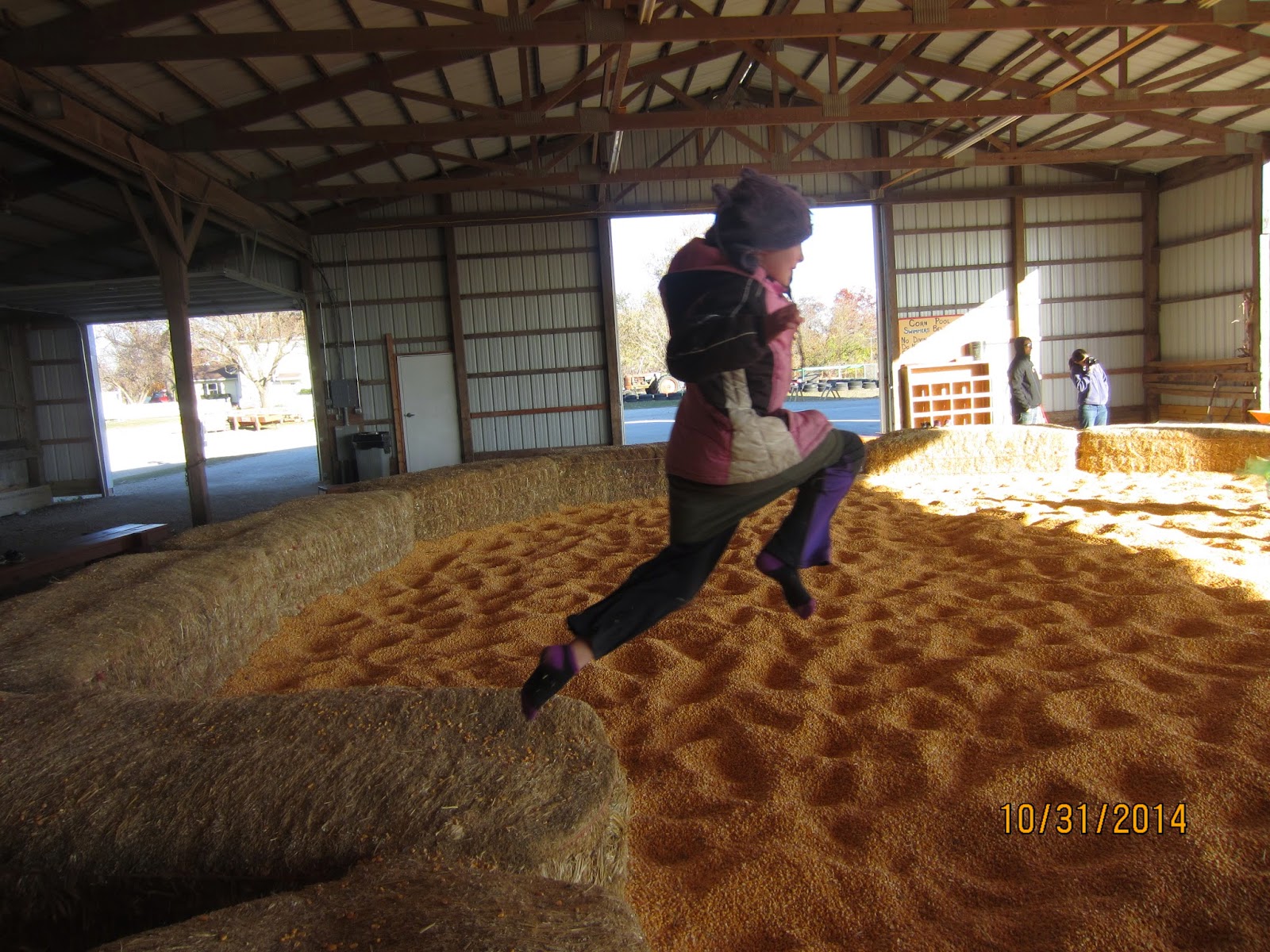 This orchard/pumpkin patch/kid-topia is a large operation, and most of the other times we've gone before it's been anywhere from busy to packed, but this time, there was only one other family there with two tiny kids who couldn't have bothered us if they'd tried.  Apparently the time to go is on a Friday Halloween late afternoon when it's cold and windy and yes, you have to layer and bundle up, and yes, you're all still recovering from the viral nastiness and perhaps standing out in a bitter wind isn't the best idea ever, as evidenced from Caedmon's worsening cough as it got colder, to the point where he coughed 'til he vomited, whatever, he's done that almost every other night for the past week and it was just a tiny bit in the grass.  There's wasn't even anyone else around to gross out/ judge me for not tucking my wee bairns into their beds and spoon-feeding them clear broth. 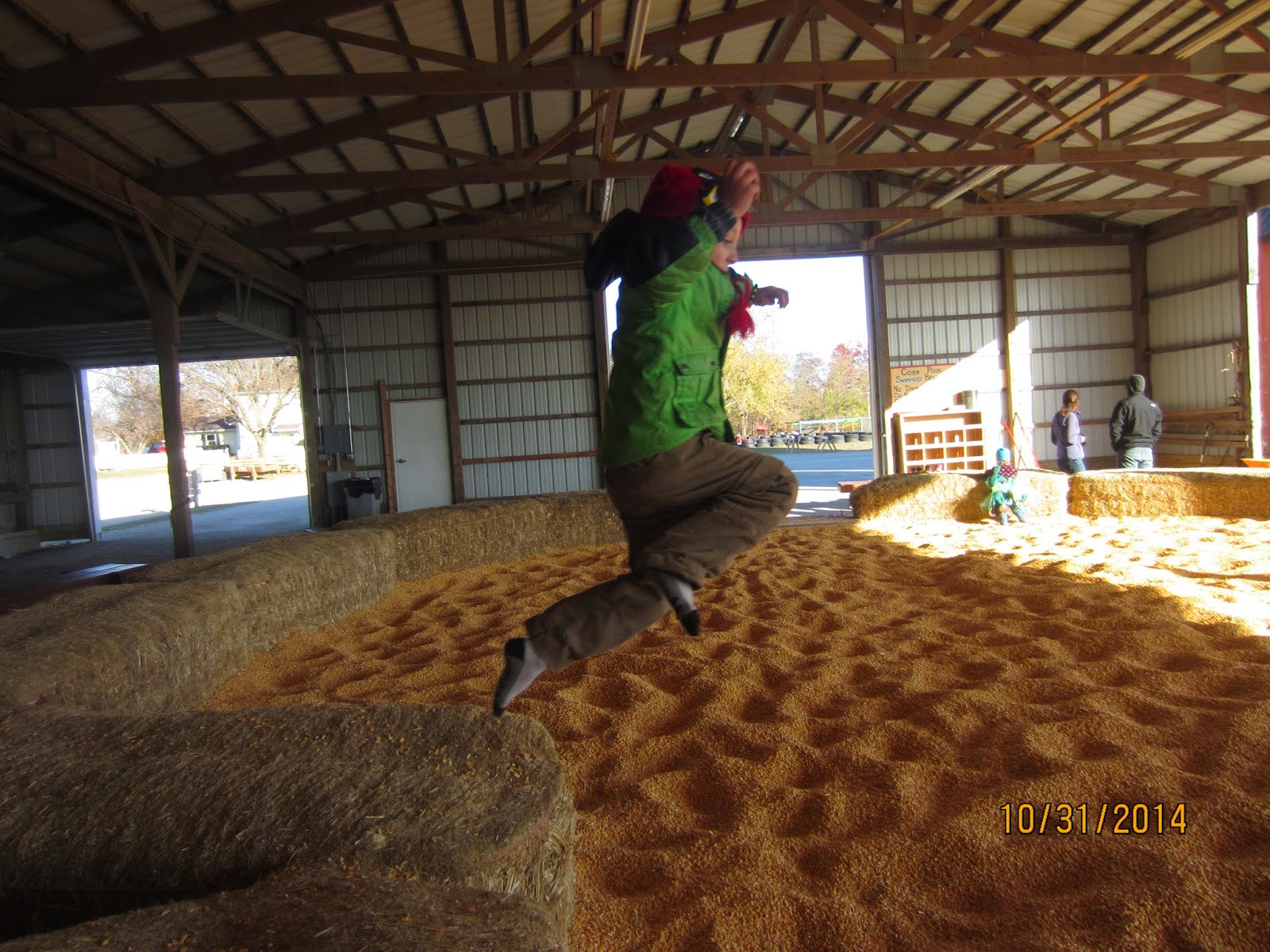 And really, they all had such a fun time. 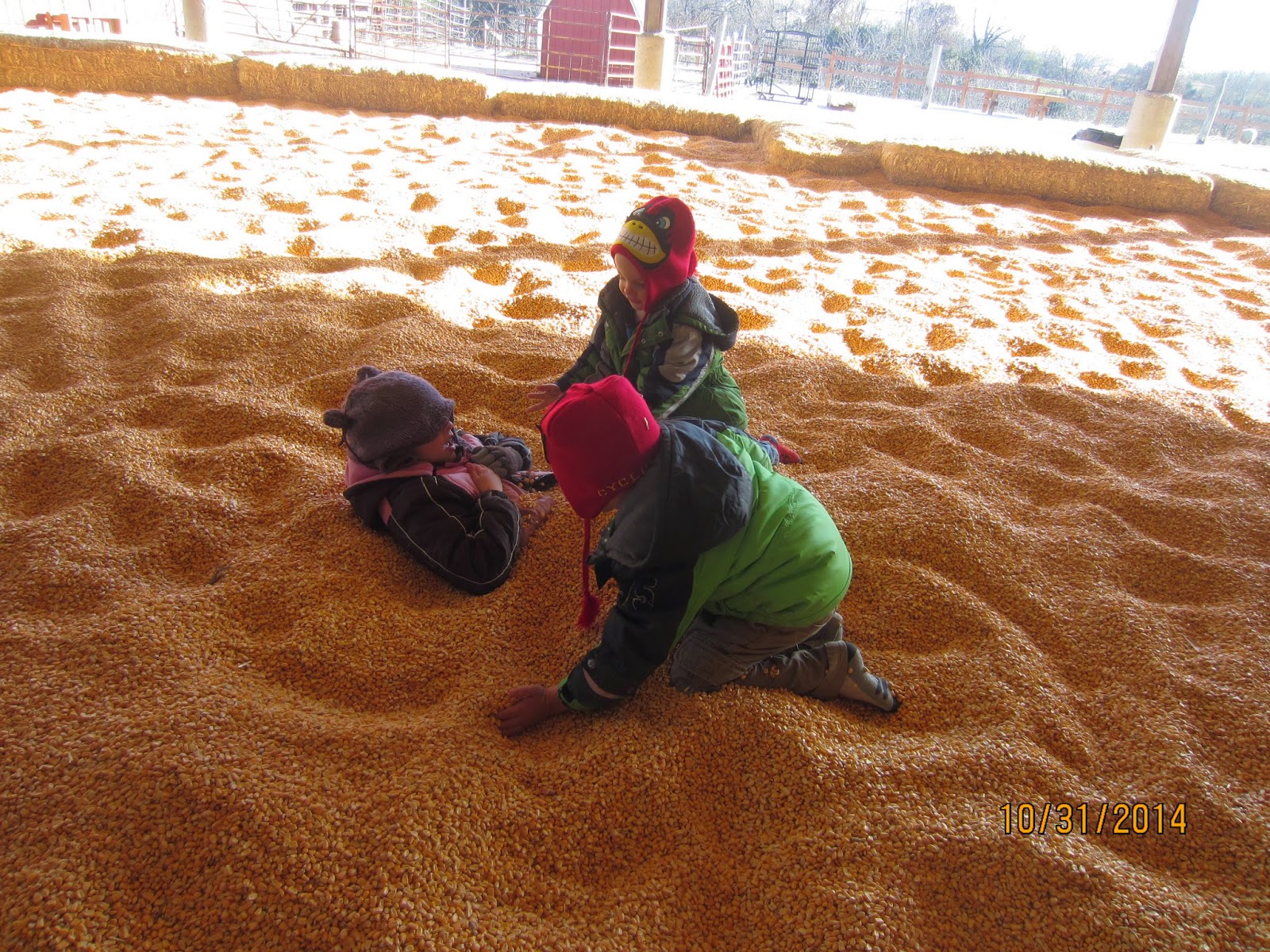 Another bonus to no one else around:  Patently ignoring the sign beside the corn pool that read:  DO NOT BURY PEOPLE.  (Relax, Derek.  She asked to be buried, and I made them stop when they got close to her chest lest the weight of the corn crush her organs.  BECAUSE I AM A GOOD MOTHER WHO THINKS OF THINGS LIKE PUREED CHILD ORGANS.) 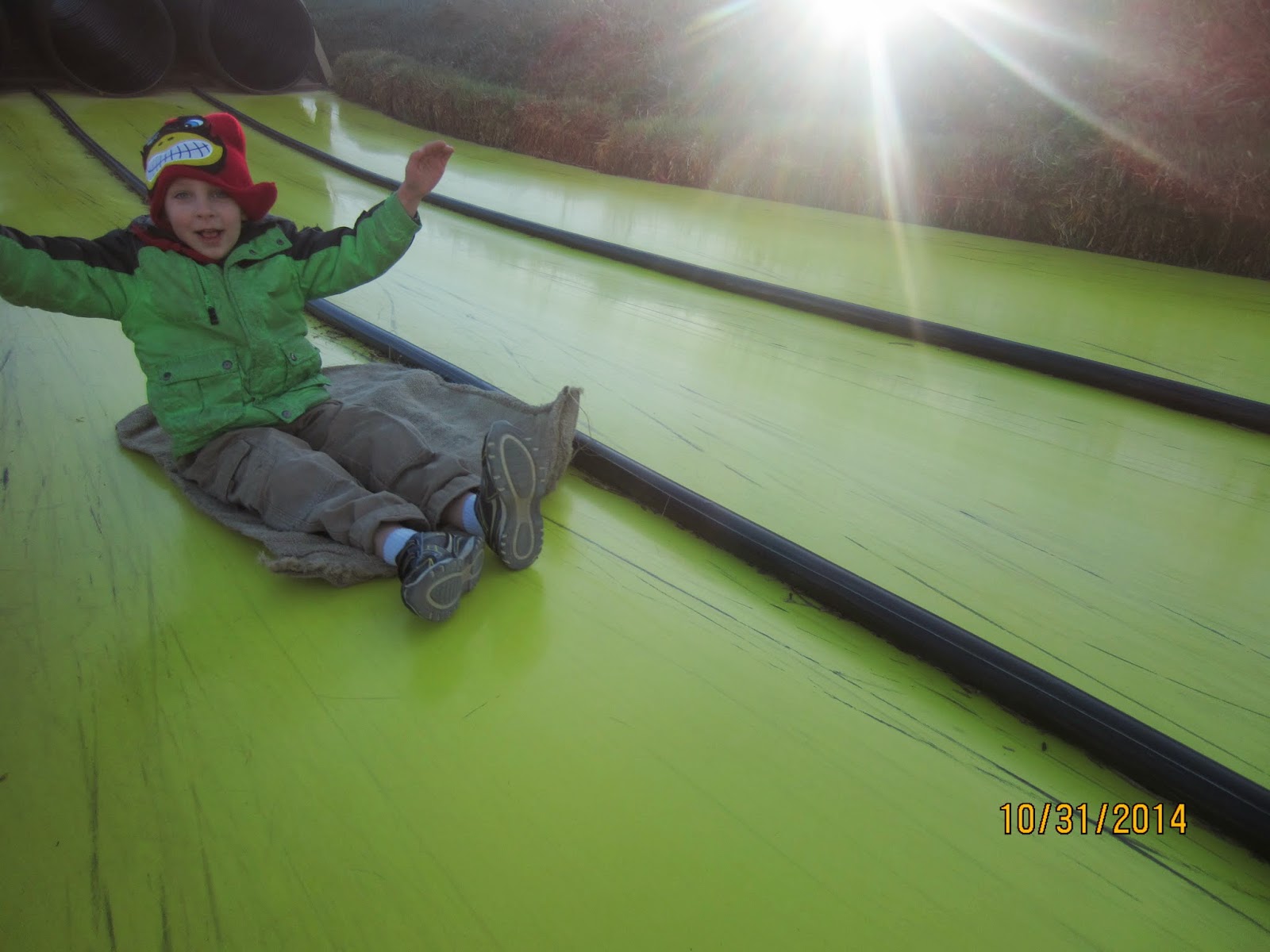 My other justification for taking the kids out to the orchard was exercise, and I made sure to tell them so at least every four minutes.  This slide, for instance, was on a long and steep hill, so every time they made it to the bottom, they had to wriggle their way off the slide and begin the long-haul climb back up, over and over again, each like a tiny Sisyphus but with burlap instead of a crushing stone.  Every time they'd begin the trudge back up, bitter wind blowing in their reddening faces, I'd holler, "Isn't this good exercise, children?"  Obviously I couldn't help them; that would negate the effects of the exercise on our Halloween candy-stuffed children.  (And by "candy-stuffed," I mean each child had been allowed to have all of two pieces each by that point, because I am a shameless dictator who sees nothing wrong with sternly saying, "You may have one piece," then eating as much as I want after they've gone to bed.  I am thisclose to making our children hail me as "Dear Leader.") 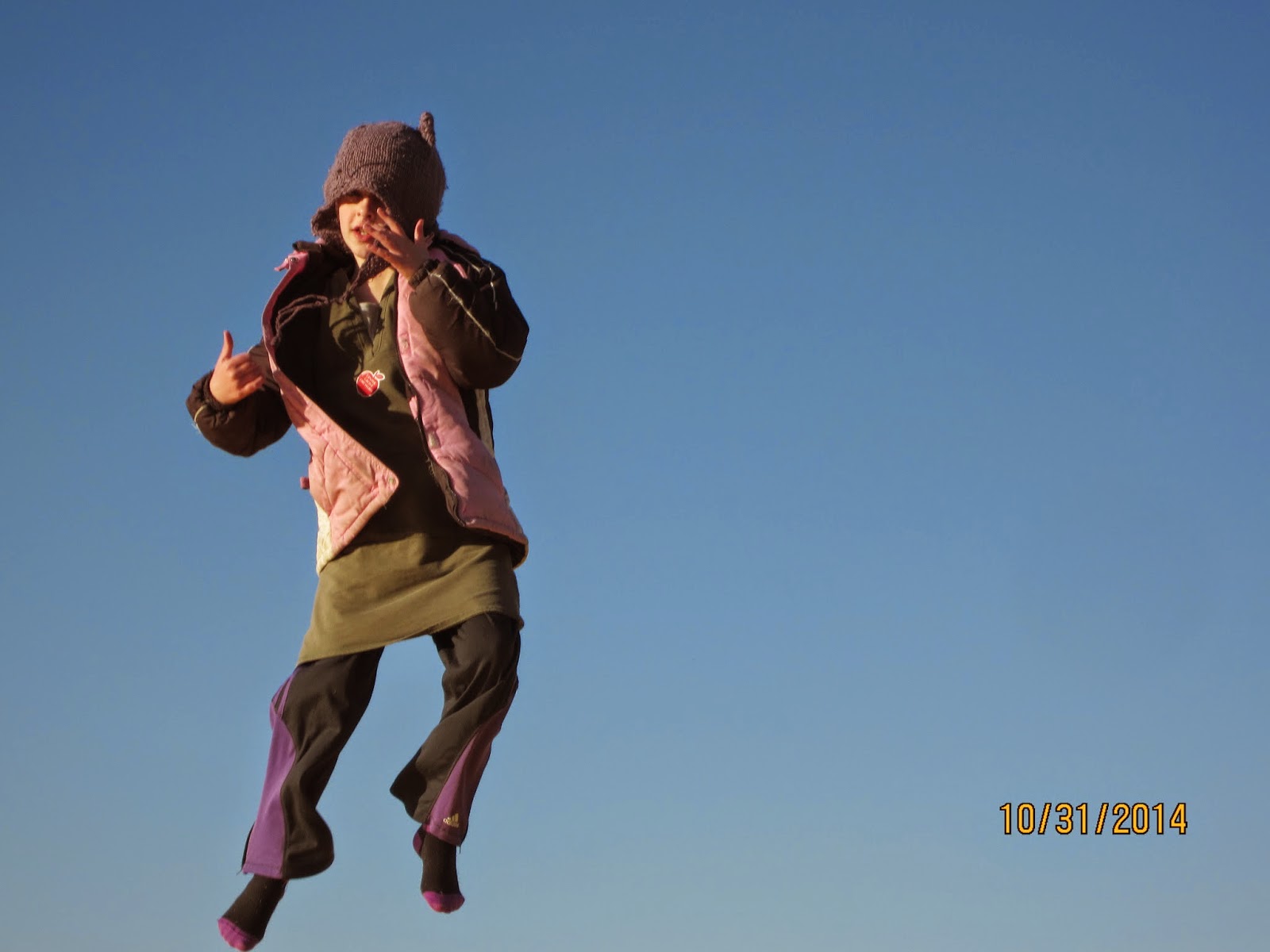 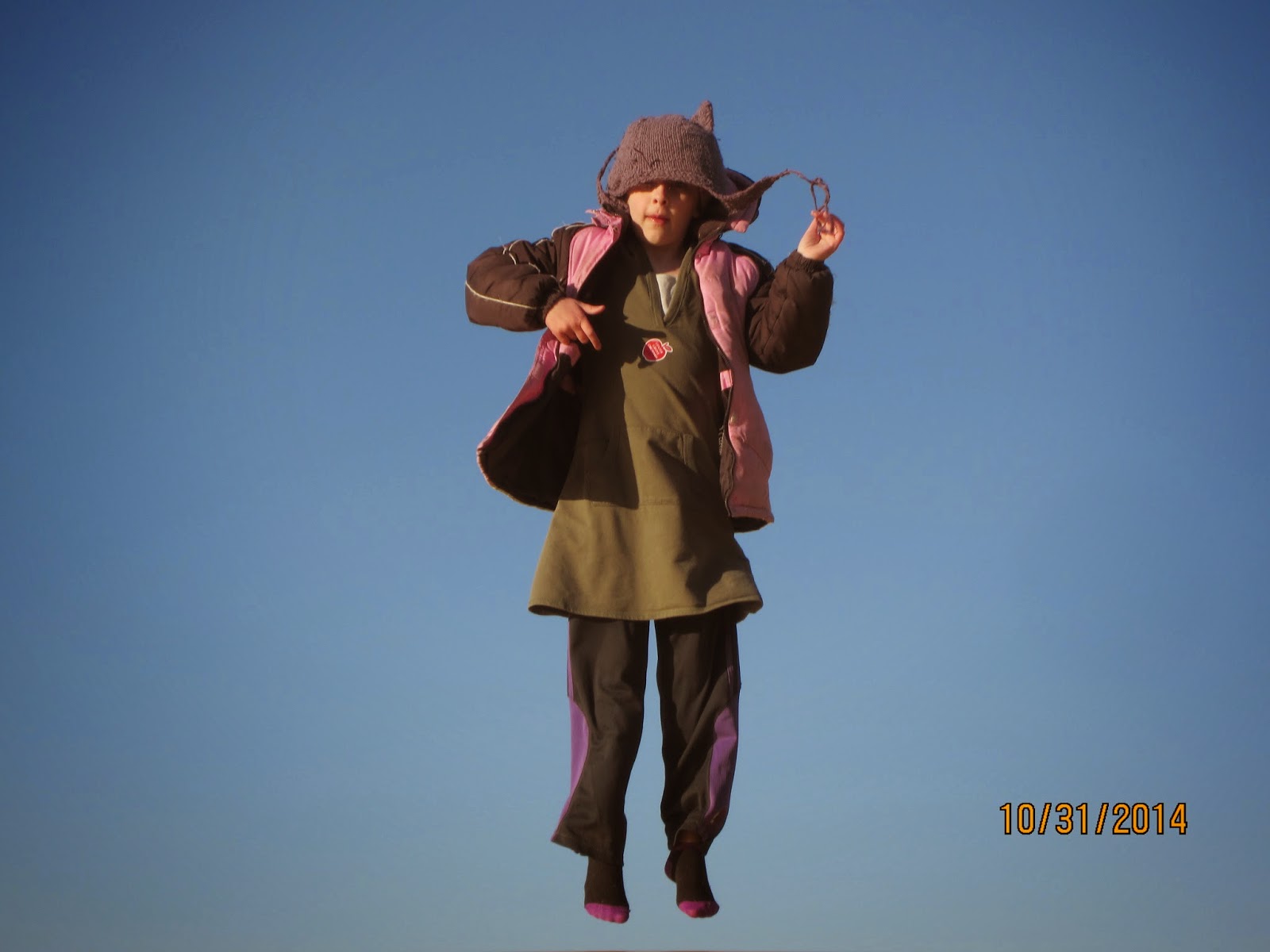 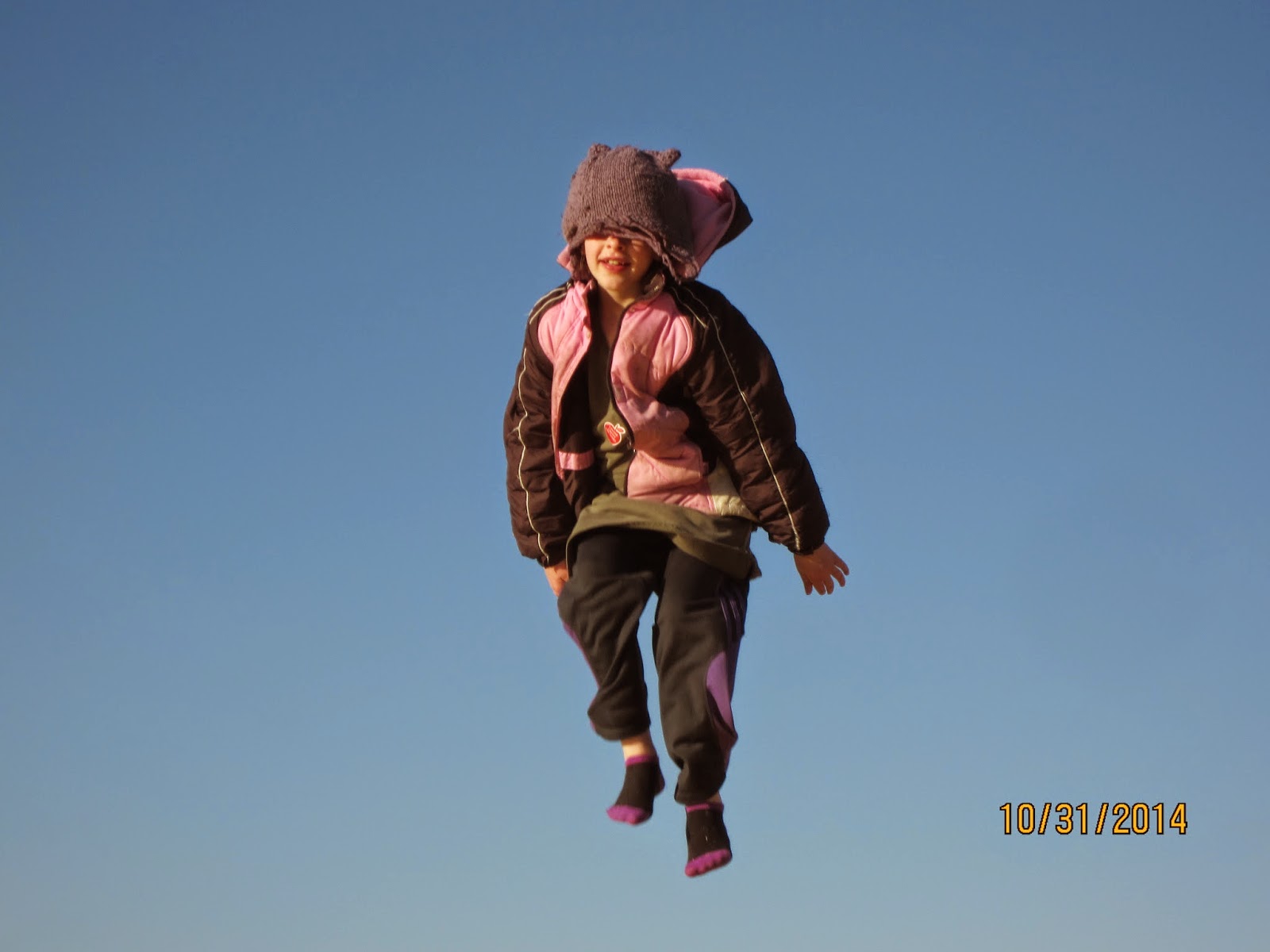 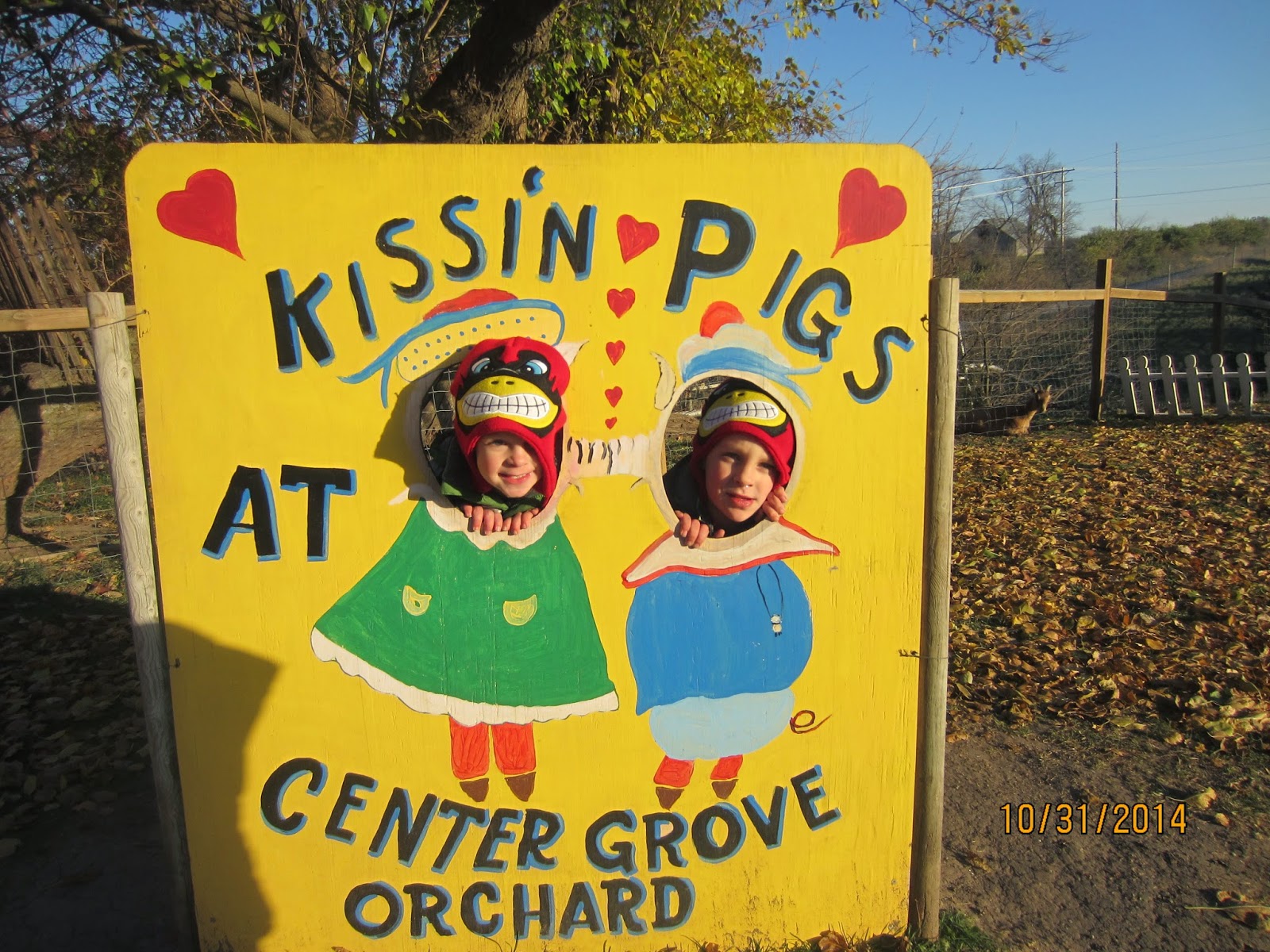 I do believe I made the right choice, after all.