It's winter; we're all stuck inside, and you're tired of reading books that aren't terrible, but they're not exactly keeping you up too late to read just one more chapter, right?

I'm here to help you, friends.  Meet my current favorite: 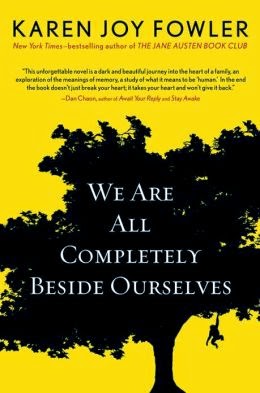 I picked this up on a whim at the Big Library as we were on our way out the door.  I liked the cover (different from the one pictured above) and the title, it was on one of the book club shelves, and I vaguely recognized the author's name.

Once I got home I moaned and groaned and complained to Derek, because UGH, this book has a chimp in it.  I am one of those people who, when they see a television show or commercial featuring a chimp (especially a chimp wearing clothing), wants to violently throw something at the tv like a... well, like a chimp.  I will (reluctantly) watch a nature program with apes or monkeys in the wild, but have zero tolerance for any kind of program where apes are being presented as anything other than apes.  I don't like the monkey house at the zoo.  I won't watch the Friends episodes with Marcel the capuchin and think those Night at the Museum movies were utterly ruined by the presence of its monkey.  I make an exception only for gorillas because they seem like the cats of the ape world; they do what they want to do, and screw you all if you don't like it. They please no one but themselves and fellow gorillas.

So this book had my negative chimp stigma working against it, then I saw the recommendation on the back cover from Alice Sebold that read, "Deliciously jaunty in tone and disturbing in material."  Do you guys remember her book The Lovely Bones?  Do you remember how messed up it was?  And she thinks this is a disturbing read?  NO THANK YOU.

Well.  Despite all that, I started the book.  I started reading.  And I couldn't stop.

You know how sometimes you meet people who've had it made most of their lives, no serious adversity, but they're big fat whiners and people you just generally can't stand to be around?  Then there are those who've faced some real tragedy, have in fact a rather bleak past or even present, but they choose to face life with humor and hope?  This book is like that second person.  The protagonist's story is... unusual.  Close to unique.  It's strange and sad, a lot of the time, but the book doesn't really read as sad (okay, not only sad); it's funny and loving and persevering.  I've finished it and several other books within the past couple weeks, but I'm not thinking about the other books; I'm still ruminating over this one.

The only problem with a book like this one is that I'm inevitably let down by the following three or four books I read immediately following.  I close them, feel dissatisfied, and say, "Don't worry, it's not you; it's me."  I'm hoping one of my next-to-read books will shake me out of this book-funk:  I've got Sea Glass waiting downstairs- it's my book club's pick for next month, and I've decided to be optimistic about it despite the fact that I'm not a big Anita Shreve fan; I'm pretty sure I'm next up in the library's queue for The Storied Life of A.J. Fikry, recommended by Cassi Renee; I'm also waiting for Can't We Talk About Something More Pleasant?, a memoir that is hopefully as hilarious as it looks.

What's your current favorite, or all-time favorite, or that one book you wish everyone would just hurry up and read already?

Email ThisBlogThis!Share to TwitterShare to FacebookShare to Pinterest
Labels: book reviews, books, We Are All Complete Beside Ourselves