A couple years ago, Derek and I agreed that the lighting in our living room sucked.  Last weekend, we finally did something about it.  This is generally how long it takes for our home decorating ideas to go from concept to fruition.

Our house came with a number of questionable light fixtures that I'm guessing were chosen for price rather than style.  They're not ugly, per se, but they don't knock my socks off, although the ones in the living room and kitchen would knock Derek's head off if he didn't either go around them or duck every time he has to pass directly underneath.  Old houses weren't built for the very tall among us, and I'm guessing the suspicious previous owners can't have been much over six feet, judging from their fixture choices.  To be fair, if you're on the shorter side, you tend not to consider such things as, "Can I easily walk under this ceiling fan?" and "Will I have to fold my body into itself just to get into this car?" and I know that taller people do much the same thing, as I've lost count of the number of times Derek and I have had the "I don't know if it's up there, as I can't see the top of the fridge, remember?  I can't even begin to see it until I'm on the top step of our step stool!" conversation.

Want to see some of these "That just doesn't make sense!" fixtures for yourself?  Of course you do! 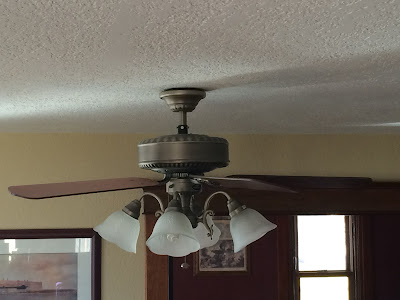 This is our living room fixture.  First of all, at eight feet high, we don't enjoy ceilings tall enough to warrant fixtures that from top to bottom hang two feet down, so why on earth wouldn't you get one of those handy dandy ceiling-hugging fans?  I know those remodelers were aware of their existence, as they put the exact same fixture in the kitchen, where the ceiling is equal in height, except this one doesn't hang down as far. I'm also not crazy about the flower-shaped light shades, but I'm willing to admit that that is a matter of taste.  Even in the kitchen, however, this fixture is a poor choice, as the pull chain is a mere six feet off the ground.  Why would you put such a low-hanging fixture in a space like this?  We won't even go into the fact that these produce the most glaring, harsh light available on the market.  It's less "Welcome to our comfortable, warmly-lit home" and more "Welcome to Guantanamo Bay, hope you're not particularly attached to those teeth."  It just doesn't make sense.

And then there are the abundance of boob lights. 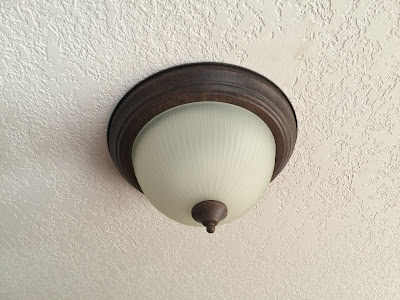 I call them boob lights because they look like, well, boobs.  Again, a matter of taste as to whether or not you want these things looming over your head.

A couple years ago, Husband and I agreed:  This lighting is terrible, and we spend a ton of time in this terrible lighting.  What to do?  Derek had the idea that sconces would solve all of our problems, I concurred, and then we turned to the internet, only to find that we have widely differing ideas on what constitutes a visually appealing sconce.  It was like picking out baby names all over again, for not since then had I heard the word "veto" repeated so often and so quickly.  He didn't like what I liked.  I didn't like what he liked.  Stalemate.

Then, somehow, right around a year ago, we found a sconce at Menards that neither one of us hated!  And they were on clearance! And yes, there were two boxes left!

Then those boxes sat on top of our deep freezer for a year.  This is normal home improvement behavior, right?

Finally, Derek arranged for his dad to come over last Saturday so they could do mysterious lighting things.  Loud sounds were made.  Multiple trips to the hardware store were undertaken.  Other things happened, like Dennis cutting into the wall to discover that the first layer was thick sheet rock,
under that was thick plaster,
under that was wood lath,
under that was wool used as insulation(!), 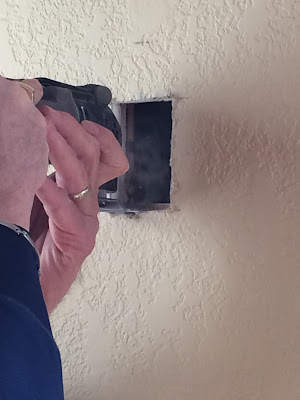 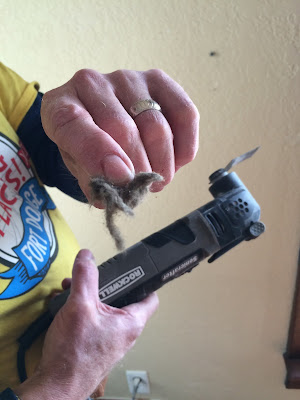 and then he said something about how it looked like the outside of the house used to be stucco?  Or, you know.  Something.  Aren't old houses fun/exasperating?

It ended up taking most of Saturday and then involved a return trip by Dennis on Monday to finish hooking everything up (again, normal home improvement behavior, right?), but finally, we had our sconces.  So exciting.  Such an improvement.
Better!
Much better!

Tomorrow I'll tell you about Derek's favorite part:  The new lightbulbs.  He has lost his mind over those things.  I am not even a little bit kidding.  (WHAT A CLIFFHANGER, RIGHT?)