Light On, Light Off

It's always funny to me how home improvement projects not only, well, improve the home, but even more so, highlight the differences between the two people living in this home and engaging in the improvement.

Now, when I hear "Wifi light bulbs" I think "I bet that has something to do with the internet," because I am a veritable wizard when it comes to technology.  I have no idea what Derek thinks (I've written before on the differences between his brain and my brain; they are varied and vast), but based on his level of excitement when he first called me about these Wifi light bulbs he'd found at the store while benignly searching for dimmable LEDs, it's something like, "Wow!  Brilliant!  Smashing!"  (That is how foreign the interior of his mind is to me:  It could speak in a British accent, for all I know.)

First of all, I was right about the "something to do with internet" thing, because we do control these light bulbs from our phones via the Wifi, but what's so fun about these bulbs, as Derek explained to me, is that you can dim or brighten them from your phone, you can adjust the relative warmth or coolness of the light, and you can create "Scenes," such as the one called "Movie Lighting" Derek set up, where if I select that scene, the lights will adjust to a certain warmth and brightness optimal for movie-watching.  You can also set up a schedule for your lights, and they'll do whatever it is you've told them to do whenever it is you've told them to do it.

Another difference between Derek and me:  That he would even think of labeling the sconces in this way. 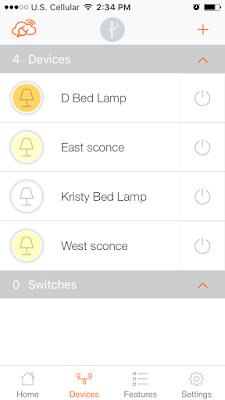 I once read an article about how geese are able to navigate their yearly migrations so successfully each year, and it has something to do with magnets.  Like, in their brains.  These magnets somehow work with the magnetic fields of earth, which is fascinating and also terribly vague, I know.  Help a girl out, sciencey people?

Anywho, Derek must have these same magnets in spades in his own head, because he can travel somewhere once, and he will ever after know that route, and how to get to this place and that place and oh you just have to head north to get to this other place, all of which is useless to me, because there are no magnets in my head, or whatever it is that he has to thank for his reliable internal compass.  I need directions that sound like, "Next, you're gonna look for a crazy-big statue of a guy with a sword.  Turn LEFT at the sword-guy.  Go two more blocks, and turn RIGHT at the wrought-iron fence topped with fleurs-de-lis."  Now those?  Those are useful directions.

And yes, I know Right sconce and Left sconce could be confusing, as they change depending on whether you're looking at them or sitting on the couch under them.  (Derek says.)  Still.

Another neato thing about these lights are these settings: 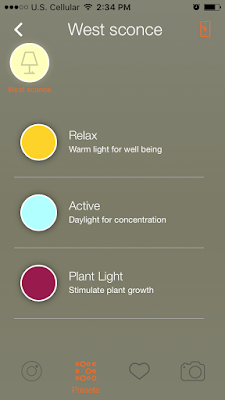 Have we used any of these settings?  No.  But, see, we could if we wanted to!

Now, it's possible you're more like me, and you're reading this thinking, "Hmm, that sounds kind of neat.  Interesting.  Good to know."  However, if you're like Derek and all this Wifi light bulb business makes you go, "Holy cow- this is the most amazing thing since Midsomer Murders Season 17 finally showed up on Netflix- this makes my skirt blow up so much I feel like Marilyn Monroe over a subway vent except hopefully without the associated drug use/mental illness/poor life choices!"  If that is you, then here's what the box looks like for this little system that we are, indeed, satisfied with, at least one week into use: 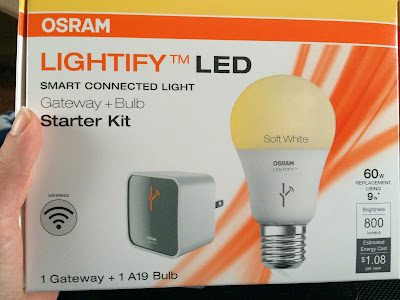 I should also note that Derek got these at Lowe's, and they were 50% off, although I have no idea whether or not they're still on sale.  Oh, and another big plus is that because these are LEDs, they're energy-savers, and you know how I feel about all that.  (Hint:  Very strongly in favor of.)

And now I'll leave you with this photo of Caedmon with his Papa.  Derek's parents walked in on Saturday to help us with these sconces with their fancy light bulbs, and as soon as Caedmon saw that Dennis was dressed to work with tools (one of our youngest son's very favorite things), he scurried up the stairs and quickly returned proudly sporting similar accoutrements. 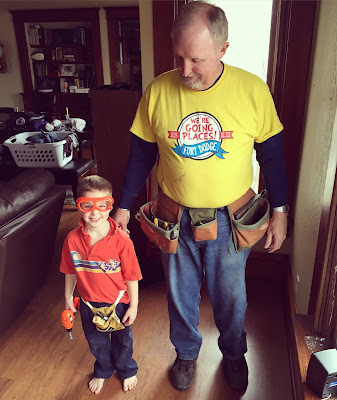