Yesterday was a weird day.

I think it was what I've heard some people refer to as a mental health day.  Or the reason people need mental health days?  I'm not sure.  All I know is that it was one of those days where you don't really feel so hot, but you don't think you're actually sick, and it's hard to pinpoint where the feeling of yuck is coming from, but you suspect it might be that old frenemy your brain.  Symptoms include a mild, nagging headache, lack of motivation to do anything at all, even the things you love, and loss of ability to communicate with the human race.

I try to keep my interactions with others at a minimum on days like these- which are blessedly infrequent- as my brain seems to require more time to process all the complicated things well-meaning acquaintances say to me, like "How's it going?" and "Hey, I like your boots!"  My delayed response plus suddenly being unsure as to what words are appropriate to any given greeting sent my way ("The sun is bright today.  Wait, no... fine.  I'm fine,"  "...........................Thanks.  They are brown.") make it so that I tend to get concerned glances, or, worse, seem to be interpreted as distant.  It's terrific.

I thought it was possible I was pulling off the whole "I am a normally-functioning human being today" facade until Derek wondered aloud if something was wrong.  Twice.  Thankfully he has watched me go through a day or fifty of these, and doesn't really take them personally, just helps me engage in what Anne Lamott calls "radical self-care" and pulls up a running documentary for us to watch together in the evening.  (The Barkley Marathons.  And it was good, you guys.  Definitely watch if you like watching people push themselves or running or screwy but neat Appalachians who put on a race that makes you go, "WHAT?" every time they reveal another detail about the race.)

Other acts of radical self-care:

Forcing Adelaide to go grocery shopping with me while the boys golfed with Dad.  Grocery shopping isn't my favorite thing, but Adelaide is one of my favorite things, especially when she sees a college girl in some of those teeny tiny short-shorts that make you think they should just be done with it and make themselves some denim underwear (mmm, so comfy) and Daughter's nonexistent poker face is just like

which made me laugh, which made her laugh, until we were quite the spectacle in the produce section of Aldi.

I also wore my favorite pair of boots, always sure to cheer me up, which my mom got me for my birthday (thanks, mom!) and for which I receive compliments almost every time I wear them.  And yes, I know these are commonly referred to as "booties," but I can't say that without our boys snickering, so I don't.  Also?  Fifth position. 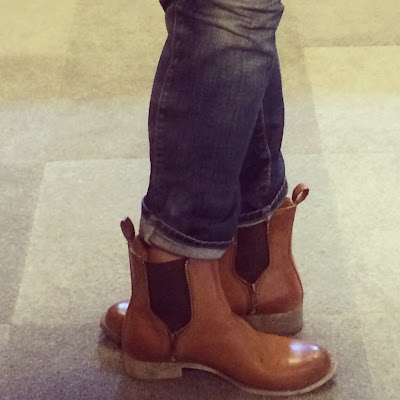 Ballet:  The gift that keeps on giving.  Please excuse my less-than-perfect turnout.  It's been a while.

Other acts of self-care:  Reading this book, eating some of the peanut butter cookies I made over the weekend, minimizing my time on social media, and not obsessing over the fact that I didn't go for a run, even though the weather was nice.


Of course, this whole thing could all be due to the startling revelation that greeted me yesterday morning:  I was out of coffee.  There was not a bean, a speck, a single ground of the stuff to be found in our house.  It is that powerful.  (It is powerful, indeed!  Hallelujah!)

(And sorry about that previous sentence; I mean, it is Holy Week, although even joking about worshiping coffee has probably branded me as an always-and-forever heretic.  Alas, it wouldn't be the first time.  HEY KELLI- remember that time we were taken into a scary van and asked if we'd been SAVED? Those were the days, hmm?)

Today, however, is better!  I went for a difficult, hilly, great run, I've remembered how to speak to people without alarming them, and Derek commented, "It's nice to have my wife back," which is always a good/sad sign; good in that Yes!  I'm back!  Sad in that I really am bad at putting on a happy face.