The other night Derek and the boys wanted to go golfing.  Adelaide and I wanted to go reading, but the boys have been asking for some time now if I could go along to watch them.  It was finally time to either acquiesce or embrace poor and selfish motherhood.  After a brief but vicious internal struggle, I chose the former.  Then duped Daughter into coming along.

Really, it was beautiful out there. 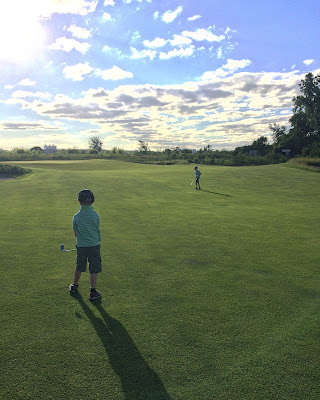 Anymore, it's a little strange to watch Atticus and Caedmon on the golf course; they're very comfortable there, and clearly know what they're doing. 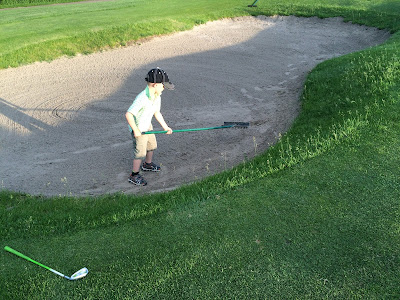 According to Caedmon, the rake is to smooth out the footprints he made while shooting out of the bunker.  I do not think my suggestion of a zen garden was all that preposterous, as golfers seem to me to be rather easily riled. 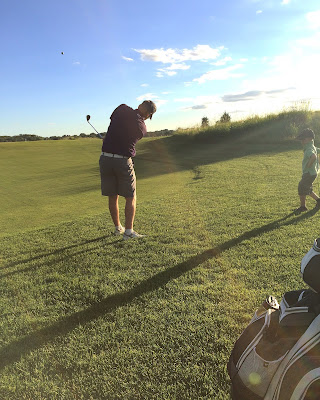 This guy tends to be outwardly calm, but I think even he could do with a therapeutic session of rake, rake, raking his cares away.

Meanwhile, I get the stink eye from Derek for making new friends instead of paying careful attention to everyone's swing. 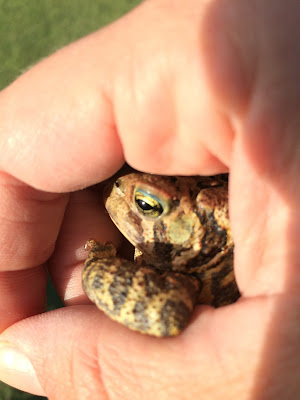 I did pay some attention, however- how else would I have gotten photos of everyone, even Adelaide!  I am not including that one, however, at her request.  Perhaps she doesn't want proof out on the internet that she can be coerced onto a golf course?  She's part of a secret anti-golf society?  Sadly, we'll never know, as she flounced out of the room when I (nicely, I was just curious!) dared ask her why I wasn't allowed to share the photo of her.  It would seem that being ten is rough, or maybe that's just when you're the sole intelligent being in a family of eejits.

Even though the boys- particularly Atticus- desperately wanted to stay and play longer, Derek took pity on certain family members (um, not the boys and Derek) and we left after playing all of... I don't know, seven holes?  Derek can remember every hole and every shot and every whatever in a round of golf.  It all blurs together to me:  First, you select a club out of your bag.  I am assuming this selection is not random, but who the heck really knows?  Then, you swing the club at the ball.  The ball heads (hopefully) toward a tiny hole in a vast green space.  Repeat as necessary.

It sure is pretty, though. 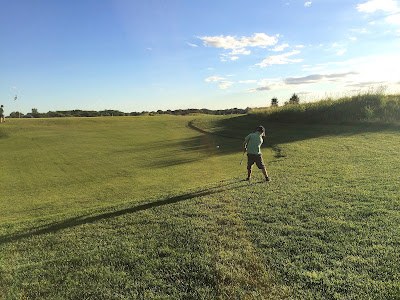