A few days ago I noticed the drain in our kitchen sink acting up.  I chastised it by running the garbage disposal repeatedly, but with great gentleness, as the garbage disposal frightens me.  If whirling blades hidden in a dark, dirty cave that are somehow hooked up to both water and electricity don't scare you, well, I tip my hat to you.  You are made of sterner stuff than I.  Also, on a completely unrelated note, kindly make an appointment with your friendly neighborhood head shrinker at your earliest convenience.

Shockingly, running the disposal did not fix the problem, even when intermingled with prayer in varying doses, to the extent that by this morning there was standing water in the tub of the dishwasher and the sink drains were crankier than ever.

I had a counter-full of dirty dishes, but thankfully I also had three children sitting around, handily home for summer break.

I put on my Supervisor hat and loaded each kid down with two arms-worth of dishes and sent them upstairs to the bathroom.  (I had carefully scraped every last crumb of food into the trash, for any of you who are miraculously 1. still reading this, and 2. worried for the future of my bathroom drains.)

I used a bucket of soapy water to wash the dishes, the bathtub faucet to rinse, and my three favorite indentured servants to dry, cart downstairs, and put away, rotating assembly-line style. 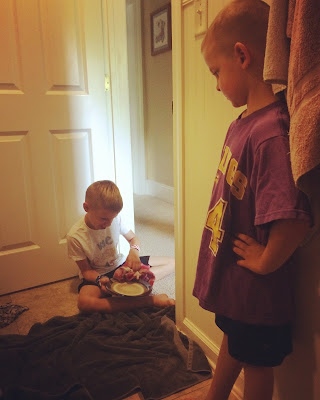 Maybe halfway through, when my back started screaming at me from all the hunching over and twisting and I was unpleasantly reminded of pregnancy, as I am anytime my back throws a toddler-worthy tantrum, Caedmon chimed in, "Isn't this fun?"  The other two agreed:  "It's like an adventure!"  "I've never washed dishes upstairs before!"  I zipped my lips before any negative sentiments could fall out, skip gaily over to our children, and suction themselves to those sweet, naive, sheltered bodies.

By the time we were done, big crock pot put away and everything, the exotic chore had lost a bit of its luster even for the kids, although Adelaide remarked, "This all gives me a lot of sympathy for people who lived a long time ago.  We just did some dishes and it was so much work."  I agreed and then we all decided a break had been earned, being 21st century sloths, ourselves.

I, at least, have a semi-valid excuse for any slow movement today, as I had a severe asthma/allergy attack last night after supper.  It was very strange to experience one during daylight hours, as they usually strike in the middle of the night.  The perk to this was that two texts to Derek from the bathroom and he was rabbiting out of the house for liquid Benadryl, which is the fastest acting allergy med according to my doc, and a drug I should ALWAYS ALWAYS ALWAYS have on hand, also according to my doc.  Ha, ha, whoops, sorry, Dr. T!  *laughs, gasps, wheezes, passes out because I can't manage to follow doctor's orders.*

The dross lining is that I scared the kids, to the extent that both the boys clutched me, crying, when it was clear I wasn't actually going to die.  I'm not sure what triggered the attack- the only two novel foods at supper were a barbecue sauce and the blackberry cobbler.  I had taste-tested the sauce at the grocery store, though, and I've had all the ingredients in the cobbler before, if not combined in that precise way.  Well, this was my first time with frozen blackberries as opposed to fresh, I guess.  Either way, boo.

Oh, but good stuff has been happening, too, because despite what I may have led you to believe over the course of this post, our lives are not a Greek tragedy.  Although if it were, our children would make a darling chorus. 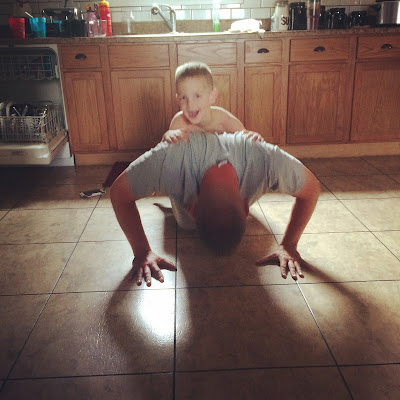 Derek has been doing push-ups with a living, breathing, wriggling fifty-pound weight on his back.  This causes delight on the part of the weight, exhaustion on that of the pusher-upper.

Adelaide has been doing exactly what you're supposed to do when it's summer, which is read in a hammock. 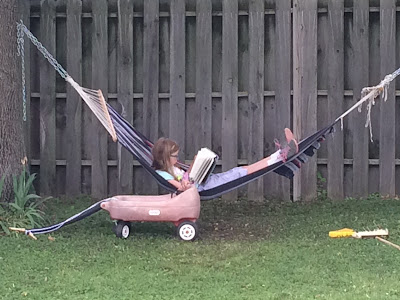 But it's a falling-apart hammock, so she also earns the label "daredevil" with this practice.

Really, I think it's just a desperate desire to be away from her loud brothers for five seconds, especially whilst re-reading the Harry Potter series.  She's still impressed by my ability to finish most of the sentences she begins reading aloud from the HP books- tell me, when will she stop thinking the things I can do are fun or cool?  It feels inevitable, but I can't predict its arrival.  She is an accomplished eye-roller, if that helps. 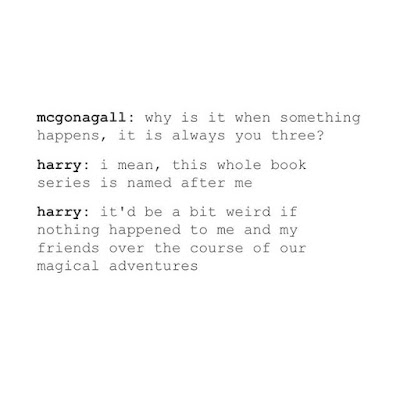