Since things are all serious and stressful right now and I'm afraid to turn on the tv for fear of what election news awaits me, I'm going to discuss only the most trivial of things tonight.  I get to do this because I voted and then was called a socialist by a patron at the library who did not vote as I did.  Ah, patrons.  So fun.  (And I get double-bonus points for not saying what was in my head at the time, which was, "Actually, we prefer the term 'Marxist,' or, in a pinch, 'Commie.'"  Even if I'm neither a socialist nor a Marxist nor a communist.  Either way, she wouldn't have gotten it, trust me.)


We were in Kansas and Oklahoma last weekend, and while at my mom's house, I stumbled upon a photo.

First of all, do you remember those terrible school lunches that- at least at my schools- were called Hot Open-Faced Turkey Sandwiches?  They consisted of a slice of white bread, topped with a thin round of gray mystery meat (honestly, if turkeys got together and hired an ambulance chaser I think they'd have a real case in suing for defamation of character- I'm sure they'd get oodles of cash from all those notoriously wealthy school food providers), then on top of the "turkey" was an ice cream scoop of fake mashed potatoes, topped by meat water, or "gravy," if you wanted to drown your elementary school sorrows.

Anyway, I would decline the gravy and eat as much of the fake potatoes as I could without actually ingesting any that had touched the meat.  (I was a real peach to live and eat with, let me tell you.)  But I remember my friend Megan would slide the bread out from underneath the whole mess, then take the middle of that white bread and roll it up into a ball of somewhat-cooked dough and eat it.

All that to say, when I saw this photo of my sister as an infant and me as a three-year-old, I could only think, "Look how adorable Kelli was!  And... look how I look like a floating ball of Hot Open-Faced Turkey Sandwich bread dough with a bad wig.  Huh."


In other news, I have found that Adelaide corrects her friends notes they have written to her. 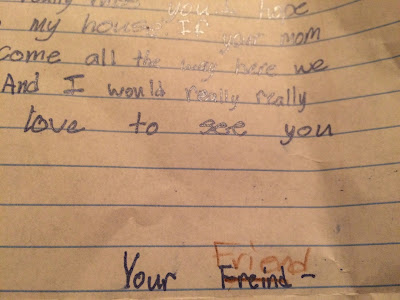 This made me inordinately happy.

In election-ish news, I saw this sign and thought the person running had an unfair advantage.  Who's not going to vote for Bacon?! 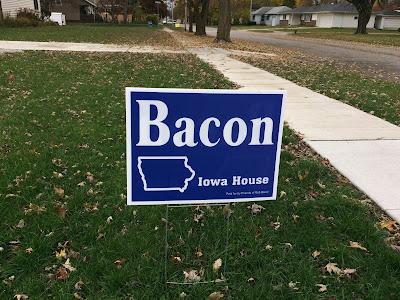 And now, if you're at the point where you just want to bypass all the hoopla and need something to send you into a meditative trance (or coma, whatever), this did it for me.  So neat.