Today is our first day of Christmas vacation.  School is closed, the library is closed, and the kids have been guilt-tripping me all year about how we didn't make gingerbread cookies last winter, so today:  Gingerbread cookie day. 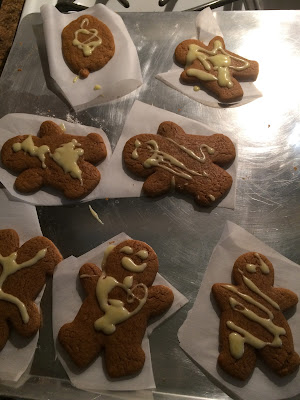 They only took three hours to make, are pathetic to behold, and taste like one of my least favorite desserts!

Now, to be fair, I had a certain six-year-old sous chef helping me with the cookies, which explains the three hours and the section of butter wrapper found while cutting out the dough, plus my insistence upon trying a new recipe that includes zesting citrus fruit didn't exactly cut down on the prep time. 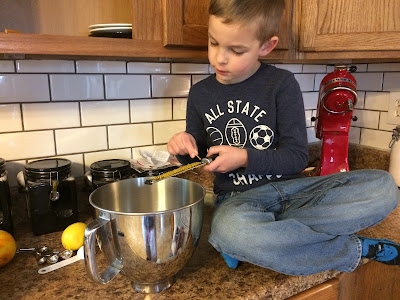 Caedmon likes to use a toothpick to extract every last bit of orange from the zester.  This did not take forever or cause me to age one hundred years while waiting. 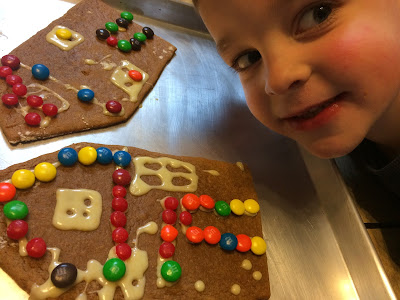 Those are the eyes of a kid hopped on the demon gingerbread.  I am, sadly, his dealer.


In other Christmastime news, the little town nearby goes a little crazy over Christmas.  The library I work at is just off Main street in this town, where they plunk a live tree right in the middle of the street, 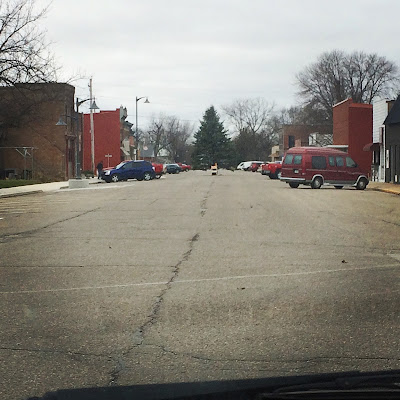 but also thoughtfully (or perhaps their motivations are more of the legal nature) leave enough space to swerve around it so you can still, you know, drive down Main street.  They also have speakers mounted along Main, and they've been playing Christmas music for the last two weeks.  It is marvelous. 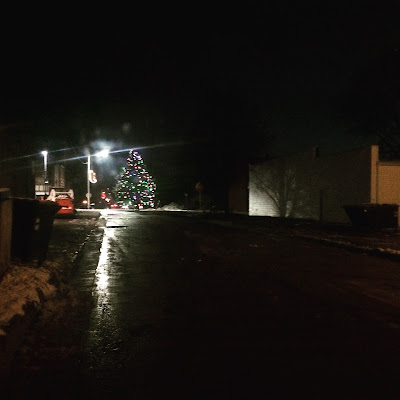 
We don't put a tree down our house's main thoroughfare- or even have a live tree, for that matter- but we do have a kitchen pig all decked out, and that has to count for something, right? 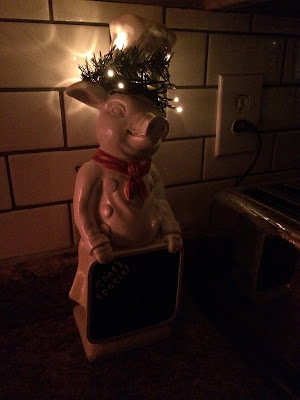 Just don't talk to Derek about the pig, okay?  He may or may not have said something about what is clearly a CHRISTMAS WREATH resembling a crown of thorns, instead.  Never mind that this is a pig and Jesus was Jewish.

Although I don't remember reading anything about Jews being at odds with pigs doubling as chefs, so it's probably fine.  I mean, our kitchen pig probably keeps kosher, right?  He's not going to cook or serve up his own kind!  Thank goodness pigs aren't known for being savages who will eat absolutely anything, including other pigs.

P.S.  This post did not end up in a place any of us were expecting.  It is not just you.

Last Sunday we awoke to our first real accumulation of snow this season.  It was only a few inches, but it was still enough to excite our children and have Adelaide exclaiming, "Finally!  I was beginning to think we weren't going to get any snow this winter."  It was December 4th. 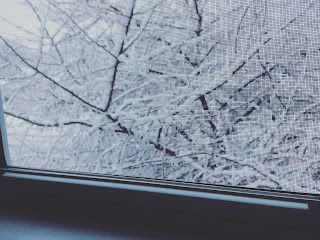 Because it's December, I've been venturing outside of my usual stores (Aldi, Fareway, and Aldi) to do some Christmas shopping.  This is always a highly entertaining time, because since I'm not used to visiting such a vast array of stores, so many of their contents are a novelty to me.  Behold: 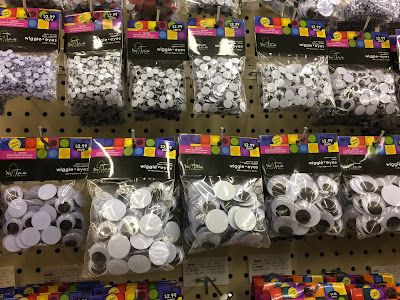 Derek's mom gave me three small, conical foam trees a few years ago, and I'm just now getting to doing something with them, because our children are finally all old enough that I can do things like get out the hot glue gun without fearing for anyone's lives or digits.  I've hot glued pennies all over one (the effect is cooler than it sounds), but what to do with the other two?  I saw these and Hello, Inspiration!  A tree covered in eyeballs!

And another in hair! 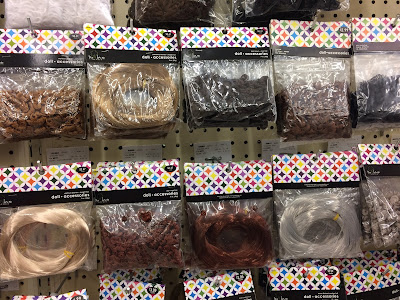 Fortunately I walked out of the store with neither eyeballs nor hair, and with the fresh air returned my sanity.  Still looking for ideas as to what to cover those foam trees in, though, if you care to share.  Not strictly opposed to body parts.  (Oh, to be a fly on the wall when Derek reads this.)


In addition to such exotic stores as Target and Hobby Lobby, I'm on Pinterest more often this time of year (Christmas crafting, huzzah!), and for some reason Pinterest seems to be under the mistaken assumption that I'm one of those higher level, crazy-super-healthy eaters, so it keeps grossing me out with "Suggested Pins" like this one. 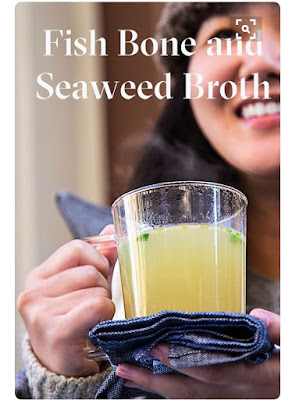 I mean, really, Pinterest, isn't the fact that I pinned this 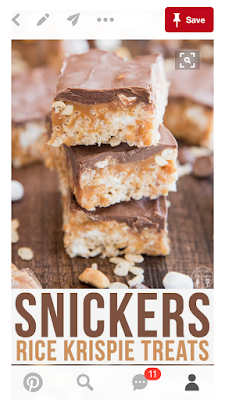 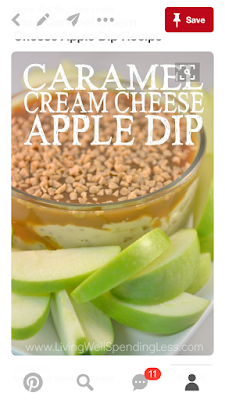 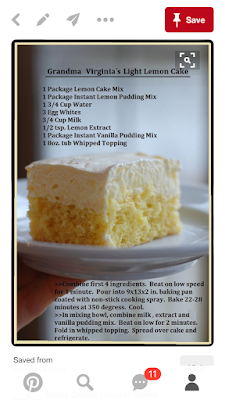 enough of a clue?

Now, I won't be eating all of those in the same week, but make no mistake, I will be eating them.  I'm not interested in your ocean witch's brew, Pinterest, even if it would prolong my life by five (sad and hungry) years.
Posted by The Crislers at 9:30 AM 1 comment:

This morning I was going through the house, opening the blinds to let in some sunlight in an attempt to help warm our chilly home.  I pulled a cord, the slats turned, and this little guy was sitting there waiting for me. 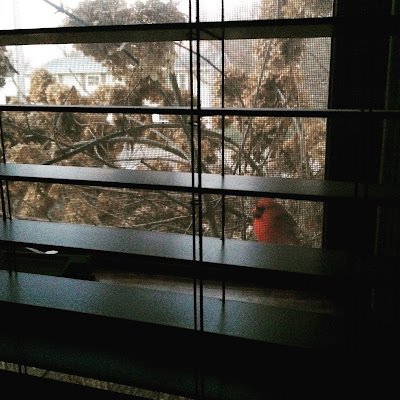 I was planning on cutting this hydrangea back all fall, as it's gotten so big and top heavy, but then I got sick and then it got cold out and then I saw this fella and remembered our hydrangea bush is a favorite perch for cardinals every winter.  It's tucked into an outer niche of our house, which means it's somewhat sheltered from the wind, but also means I can look out the above window in the living room and watch the cardinals, or... 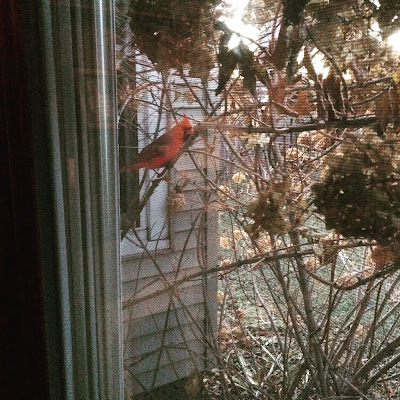 ... I can go into the front room and spy on them from a different angle.  It seems to stress them out when I go back and forth too much, though, so after snapping a couple pictures I left him alone.  The only thing that would have made this better is to have had a female cardinal in there, too, as I prefer their muted coloring and besides, female solidarity and all that.

Last night Derek's mom very kindly drove down to watch our kiddos for the evening so Derek could take me out for my birthday.  I wanted to eat at a restaurant that has these amazing(ly unhealthy) waffle fry nachos topped with pulled pork and other glorious fixin's, and while yes, those nachos were incredible, our joy was somewhat muted by the fact that we were freezing the entire time we were there.  See, this local chain of restaurants builds decks onto their buildings, then for some exasperating, flummoxing reason encloses the top with a glorified tarp and continues to seat diners there all year.  There are heaters suspended from the ceiling, but as Derek put it, we were eating on a three-season porch during the fourth season. 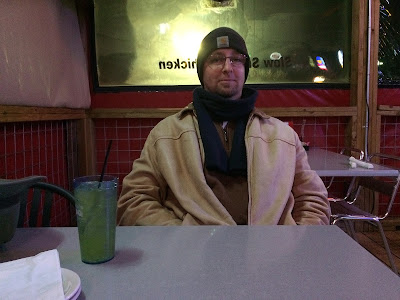 Why, yes, we did wear our coats, scarves, and hats throughout the meal, thank you so much for asking!  I took my gloves off because I found manipulating my silverware with them on to be a bit unwieldy.  I was so mad I hadn't worn my long underwear under my jeans, as the draft coming in under the table around my legs was brutal.

This wasn't mere overflow seating, either; we saw numerous open tables as we were led through the (deliciously warm and cozy) dining area to the winter porch.

Jethro's, your food is good, but it is December in Iowa.  Please stop with the deck seating.

Let's see, I have talked about one of my favorite birds, my hydrangeas, and complained about a recent visit to a restaurant.  Although I have tiptoed around it many times before, it would seem that 34 is when I begin my official foray into cranky old-ladyhood.  I am comfortable here.

My next request for our birthday date was to visit the local antique mall (hang on while I search for the expedited application to AARP).  Which we did.  And it was, as usual, glorious. 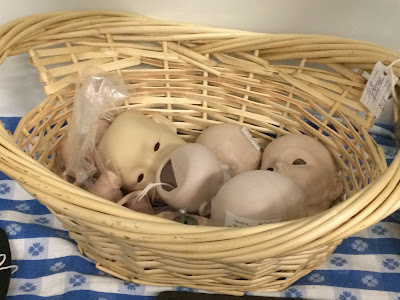 Derek and I will be celebrating 13 years of marriage next summer, and while I know ten years is Tin and 15 is Crystal, I have a feeling 13 might just be Basket of Heads.  If I'm right, I know exactly where to look!  Thanks, Brass Armadillo!

Really, though, the only thing I came close to purchasing was found in this stall. 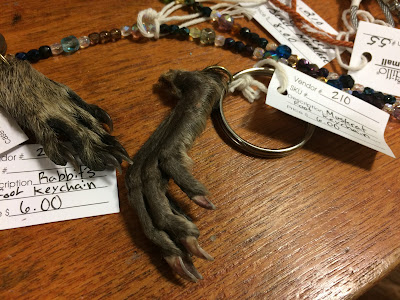 The good angel was saying, "Do you really need a muskrat foot key chain?  What about the starving children in China?" but the bad angel was like, "It's your birthday:  Treat Yo Self!"

In the end, I did not bring the muskrat foot key chain home, as it's hard to buy something you're afraid to touch.  But gosh, did my grinchy heart grow three sizes that day.
Posted by The Crislers at 11:53 AM 2 comments:

Adelaide had her winter vocal concert last night.  I can tell our kids are getting older, as the times of their activities are getting later and later in the evening.  Unfortunately, I am an old lady at heart, so my response almost always elicits an eye roll from Daughter.

*Adelaide rolls eyes, wrestles internally over whether or not she should dignify her mother's histrionics with a response*

*Adelaide reads all this at school, gets yet another chance to roll her eyes at her mother*

And now you're up to the present.

But going back to last night, after Adelaide came downstairs, dressed and ready, Derek kept observing how grown up she looked.  He said this in an unemotional, here-is-a-fact kind of way; this did not stop me from growing increasingly emotional each time he said it until I wailed, "Stop!" because he was right.  She did look grown up. 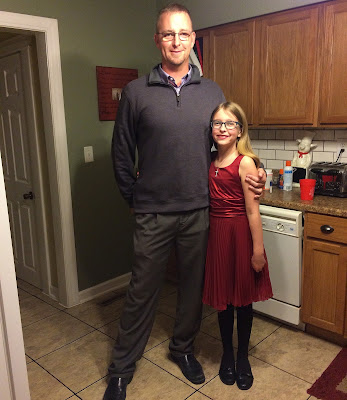 I purposefully put the above photo at this point in the post, not just to brag about how good-looking my husband and daughter are, but also because Adelaide looks much younger when she's next to her father.  Maybe I should just hog-tie the two together.  (Note to self:  Google "How to hog-tie people together" ASAP.)


We arrived at the concert early, as Adelaide had given us very specific instructions on where she wanted us to sit, and if you want to be in the front two rows, you have to get ahead of a couple hundred people to secure your seats.  We sat right where she wanted us to, which turned out to be nice, as she saw us and we saw her and I got to take pictures of a bunch of my friends' kids to send to them.

There were cute little presentations between each song, and one of my favorites was two boys pretending to be reindeer telling each other really terrible jokes. 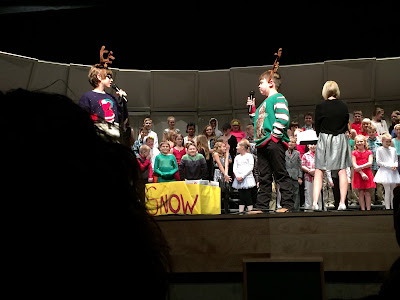 (There are heads in the foreground of every photo; we were in the second row, but there were people in the first row and I am not tall.  Just look past the black blobs, please.)

Two reasons these jokes were the best:  First, Daughter's face. 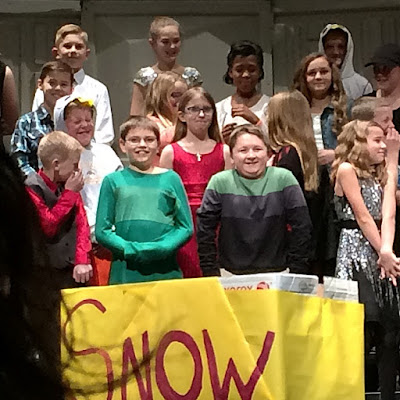 She is in the center, there, in the red.  She made this face every time a corny joke was told.  Everyone in the auditorium was chuckling.  Adelaide was wearing the expression she has when she feels one ought to know better than to do something, but don't worry, she'll just be embarrassed for you.

The other reason these jokes were the best is that for us in the second row, they were in stereo:  the family of one of the reindeer comedians was sitting right behind us, and apparently he had been practicing these jokes frequently in their home to prepare for the big night.  His little brother was directly behind me, and recited each joke, word perfect, along with his big brother up on the stage.  It was hysterical.

Atticus did not share in his sister's reservations; he enjoyed every groan-worthy punch line. 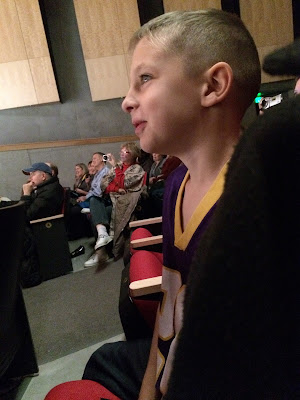 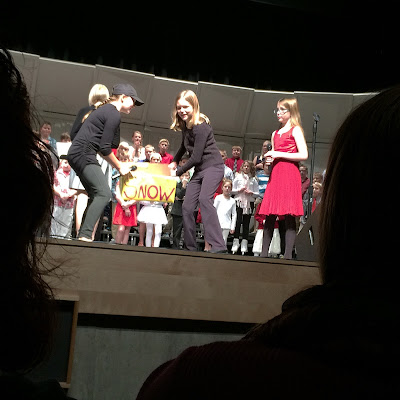 She performed it admirably, and looked so grown up!  *keens*