And Then I Started Teaching Yoga

I had a professor in college who, if you were in a meeting with the organization she led, just a-brainstorming away and then raised your hand to contribute your idea, would say to you, "That sounds great!  That is a good idea for this reason and this reason and this one, too.  You are now in charge of making that idea happen.  I will check back with you next week to see what progress you have made."  And you would blink back at her and realize that you were now actually being forced to do something with your ideas, for once, rather than just yap-yap-yapping away, which really is exactly what college kids need.  This is one of the many things that make her a terrific professor but also make raising your hand in her presence slightly terrifying.

I'm thinking of this because last summer, when I interviewed for my job at the library, the director and I were discussing the current programs at the library along with potential future programming.  She mentioned the possibility of yoga.  I told her that I love yoga!

Six months later I was teaching a yoga class.


The circumstances were a trifle different this time, as I was first asked if I'd like to lead a yoga class, plus I'm teaching alongside one of my co-workers.

Teaching yoga has been... interesting.  Wonderful and delightful, but also interesting.  In the past I've pretty much done whatever the heck I want to do when practicing yoga.  Tight hips?  I think I'll do 45 straight minutes of hip-openers.  Tree pose getting a little boring?  Then I'll just practice dancer pose forever and ever amen just because I love it so much.

Well.  You can't do that when you have a dozen people staring at you, waiting to tell you what to do next.  Especially when you're trying to keep the knee problems of one, the back problems of another, and the hip replacements of the third in mind.  I don't exactly tailor my sequences to the needs of our participants, but you have to keep the ability level of the people you're working with in mind.  45 straight minutes of hip openers and no one will come back, unless you're me, of course.  So when I'm in Warrior II and would normally hold it for another ten breaths but can see that half the class is dying, I only make them hold it for another two.  Two and not one because sometimes you have to be a little bit mean.  I speak out of a place of love, of course.  (Or do I?)


As for co-teaching, here me now:  If you are ever asked to teach a yoga class (because take it from me, this does happen, apparently), and you have a chance to teach it alongside another person, DO IT.  Yes, teaching is rewarding and you get to choose what you're doing and how to lead the class, but what's even better than all that is leading four or five poses and then getting to just follow along for the next few- sure, demonstrating all those poses for your peeps, but also listening to Suzy's voice as she tells you to let your shoulders slump over your knees, or to twist just a bit further, or to hold that foot stretch longer than you ever would on your own, because she is flexible and strong in ways that you are not, and vice versa.  Marvelous, I tell you.

We began the class in January, and while I was at first worried that no one would come, I'm now starting to worry about space.  We are a small library, and each program we host requires some serious Tetris skills as we move furniture around to make everything and everyone fit.  Yoga is no different, as we average around one new person signing up each week, which I suppose isn't so surprising, as it is, after all, FREE, and as I told my mother-in-law, could also be called "yoga for people who have always wanted to try it but are too intimidated to do it at a gym."  Thankfully not everyone comes on the same day, so we tend to have one set of people with us on Monday, and another on Thursday.  Both days share the same favorite pose, however:  Corpse.  I've decided to believe that this is because it is so relaxing, not because it signals the end of class.

I'll just add yoga instructor and self-delusionist to my resume.
Posted by The Crislers at 6:00 AM No comments:

The Thing That Lives in Our Chimney

Note:  Please excuse the abundance of the word "thingy" in this post, and feel free to replace it in your own mind with the proper term.  My vocabulary of plumbing/ventilation/construction-related items is abysmal.


When Derek was installing our (beautiful, glorious, spectacular) new hot water heater recently, he had to pry off a metal thingy that was covering a hole in the old chimney that goes from the roof, through the center of our house, and on down to the basement.  This was because he had to connect this silver tube thingy from the top of the water heater to that hole in the chimney for... ventilation?  I do know we majorly sweated over whether there was the proper amount of rise- I think it was a quarter inch per foot of tubing- from the water heater to this ventilation(?) hole; our new water heater is much taller than the old one, and for a while there was some question as to whether we were going to be able to make this work.  Derek's dad threw around fun words like "carbon monoxide poisoning" just to make sure we grasped how important this whole proper ventilation thing was.


After Derek opened up that hole in the chimney but before he attached the new tube thingy, we took a moment to peer into the hole.  I suggested a picture be taken, but that Derek be the one to stick his hand in there to do so.  There was absolutely no question whatsoever that if I were to attempt the picture taking, I would have somehow dropped my phone in the chimney, never to be retrieved. 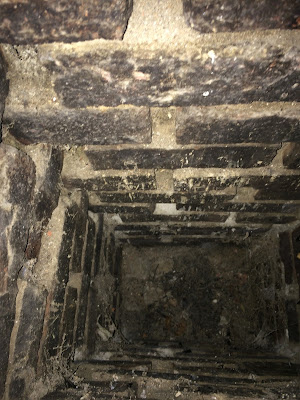 Picture my phone at the bottom of that chimney, wailing and gnashing of teeth from Derek, and yours truly sputtering, "What- But- I don't- How- I WAS HOLDING ON TO IT!"


So, yeah.  Derek took the pictures.

He first took the previous one, looking down, then the next pic, looking up.  Hello, 117-year-old chimney!  Hello, daylight! 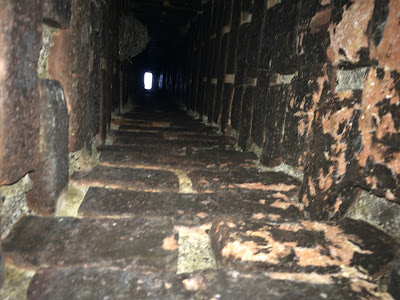 When I looked at this photo later, though... what the heck?  What is that?  That thing? 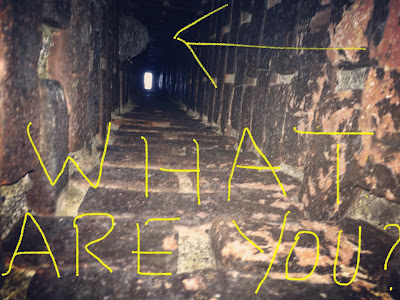 Bird's nest?  Wasp's nest?  Alien cell waiting for the signal from the mother ship to activate and whir into action?

Clearly it could be any of those three things, but a word to the wise, friends:  do not google "nest in chimney."  Most of the results are fairly benign, but a few will serve to further your belief that Australia is not, in fact, fit for human habitation.  Just trust me on this.
Posted by The Crislers at 9:26 AM 2 comments:

Two Things and a Book Review

Well.  It would appear that our laptop has a virus.  This has made it impossible to access the internet from that device, which I need to get onto Blogger, where I do all my bloggy things.  Which as resulted in the lack of recent posts.  Derek suggested I type my posts out on the word processor on the (EVIL INFECTED) laptop, save it to a thumb drive, then publish it at the library.  The man is clearly a technical genius.  (Why did this not occur to me, you ask?  Because I am excellent at wailing in anguish when things like this go wrong, but problem solving, well... it's not exactly my forte.  If you need me to point something out in the fridge that NO ONE ELSE CAN SEE WITH THEIR FUNCTIONING EYEBALLS, HOWEVER, I'm your girl.)  Oh, except there is nary a thumb drive to be found in our house, so I typed this out on laptop, took a picture of it with my phone, and am now transcribing it into Blogger at the library.  Now that is dedication to blogging (happy, Mark?).

Because I can't use my beloved gifs on these pecked-out-on-the-word-processor posts, I guess I'll have to fall back on my old stand-by:  The List.

It is good.  The kind of good where I lost time to it.  The author is a reporter who began having mild but rather random symptoms one week, which rapidly progressed to the point that she had descended into full-blown madness (her words).  They- and by "they" I mean a whole team of doctors and specialists- couldn't figure out what was wrong with her.  Nervous breakdown?  Schizophrenia?  Alcoholism?  (Yeah, you're not going to like the doctor who gave that last diagnosis.)  If you're a self-aware hypochondriac, maybe give this one a pass, but if you like medical mysteries that move quickly, induce empathy, and have (spoiler alert) a happy ending, check this one out.  I included the link below, something I would usually embed up there in the paragraph, but library computers don't allow the copying and pasting of hyperlinks.  *groans-wails-gnashes teeth-admits how spoiled I am*

Posted by The Crislers at 10:55 AM No comments: