This morning we began our day with a good old-fashioned fight.  It was all caused by the revelation that Caedmon eats his toast wrong.  Oh, you didn't know that there was a wrong way to eat toast?  Neither did Caedmon.  Neither did anybody, for that matter, except 7 a.m. Atticus.  Any-other-time-of-day Atticus probably could not care less how his younger brother eats his toast, but 7 a.m. Atticus cares.  Deeply. 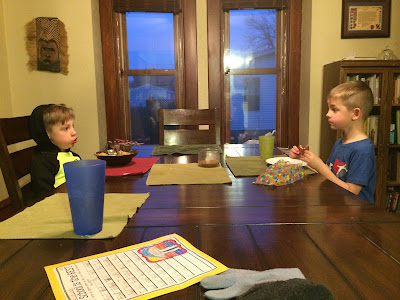 See, what we all learned this morning is that Caedmon flips his toast upside down just before it enters his mouth so that it's jelly-side down as it hits his tongue.  When you think about it, this is insanely sensible.  Clearly the boy is a genius.  I may start eating my pizza this way.  Nevertheless, 7 a.m. Atticus's sensibilities were offended.  "That is not how you're supposed to eat toast," 7 a.m. Atticus insisted.  "You are eating it wrong.  Nobody eats it that way."  Caedmon pointed out that he eats it that way, and gave his jelly-to-the-tongue reasoning.  7 a.m. Atticus did not care.  He would not be swayed.


The only reason this altercation stayed civilized is that I was present at the table.  They have flailed their limbs at each other's faces for less, I promise you.  It wasn't just me there, though; it was 7 a.m. me, and 7 a.m. me is more interested in getting enough coffee into her gullet to get her morning murder feelings under control than in refereeing such world-changing issues like Toast Up v. Toast Down.

After I had shared my feelings on the matter, we all finished our breakfasts in resentful silence, THE WAY GOD INTENDED. 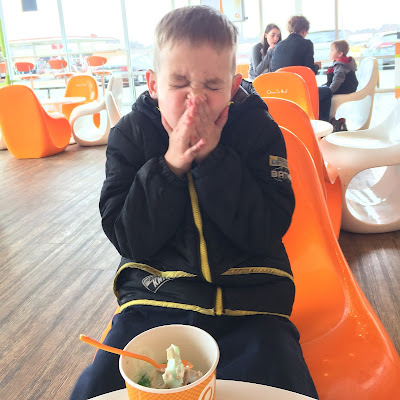 On a related note, Caedmon- who is a self-determined expert on superheroes- helped me discover what my superpower is:  I do not get brain freeze, or ice cream headaches, or whatever you call them.  I will pretend I was not disappointed that my superpower couldn't have been something just a tiny bit... well, cooler.  (Pun not intended but nevertheless appreciated for what it is.) 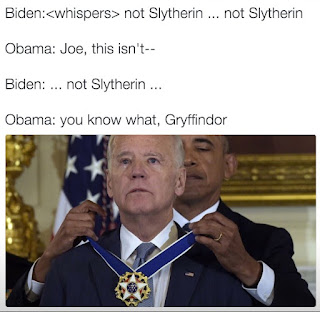 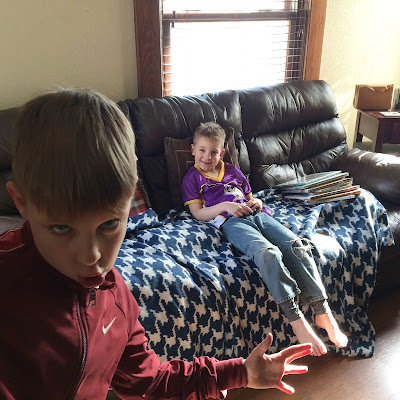 I understand if you're having trouble focusing on the subject of this photo, which is supposed to be how our youngest spreads a blanket on our couch, assembles a pile of picture books, then pats the seat next to him invitingly, beckoning you to come read to him.  Maybe you're distracted by a photo-bombing Atticus in the foreground, or maybe you can't take your eyes off those pants of Caedmon's.  I do have an excuse:  I am a human being who sometimes gets a little behind on the laundry.  That morning, before school, Caedmon had wailed to me that he had "nooooo mooooore clean paaaants to wear!"  I dug those way-too-short, mess-of-holes jeans out and told him to put some long underwear on underneath.  Problem solved.  And it's better than that day last fall, when Derek got the kids up and around for school one day, allowing me and my bronchitis to sleep in.  Sweet, nice husband.  Sweet, nice husband who I discovered sent Caedmon to school in long underwear instead of real pants and didn't realize it until I sent him a picture of our son right after he got off the school bus in those long underwear.  I laughed, shrugged, and basically chalked it up to "Whatever, he's the third child and used to these kind of shenanigans."
Posted by The Crislers at 8:46 PM 1 comment:

If you don't count the weekend, today is the final day of spring break!  Adelaide has been singing something called "The Shark Song" on repeat for the past 35 consecutive minutes, Atticus keeps bringing Caedmon to the brink of violence by pausing outside open doorways, gesturing for his younger brother to precede him and then smirking before smarmily saying, "Ladies first!" and I am wondering what it feels like to be alone.  I can't really remember.  How did I keep my sanity for a solid decade while I was staying at home with these heathens full-time?  OH, RIGHT.  I didn't.


Other spring break casualties, other than my patience:  Atticus's noggin, which is currently sporting a nasty, bruised lump behind his left ear where he attempted to vault a bench but miscalculated and instead of smoothly landing beneath the dining table instead bounced his head off the edge; Caedmon's knee, which got caught on a nail, leaving a mighty impressive wound; Caedmon's nose, which was somehow the only casualty when he fell down several stairs, bouncing his head off each step, 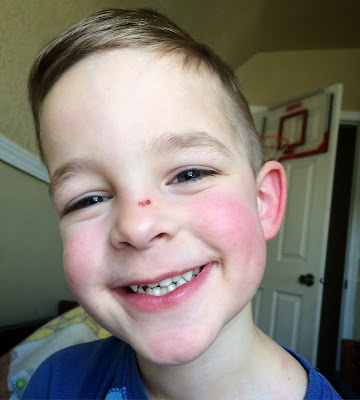 and I don't even know what else.  Thankfully, as the above photo shows, our children have Wolverine-like healing powers, and usually 24 hours or so are enough to take the edge off of whatever damage they've currently done to their bodies.  Also seen above is five or so months worth of sunlight withdrawal, aka we are all pale, pasty creatures right about now.  Send help.  Send spring.  Send something.

For several years now I have speculated on what, specifically, our children's love languages might be.  Words of Affirmation?  Physical Touch?  Maybe Acts of Service?


I think I got at least one of Atticus's locked down, finally:  Food.  His love language is Food.


Never mind that this is not one of the love languages identified in the eponymous book.  I am telling you:  food is how this boy knows he is loved.

He hasn't exactly been subtle about it.  When his teacher gave each student the prompt, "I love my mom because..." his answer wasn't "she tells me she loves me every day," "she doesn't crawl away when I drape my sick and fevered limbs over her," or even "my shoulders were as big as my head at birth which made the delivery process even more of an unforgettable experience for my sainted mother."

No, his answer was, "Because she cooks for me," accompanied by an illustration of, yes, me cooking, done in Crayolas.  That's right, this isn't something I puzzled out after eons of observation and heart-to-heart conversations with our son.  He made this as clear as possible for me, reinforcing the idea by asking me every day after school, "Are we having something hot for supper tonight?  Can we have something hot?"  This might sound like a rabid affinity for Cajun or other deliciously spicy food, but all it means to him is he does NOT appreciate it when I say we're fending for ourselves tonight and he can help himself to yogurt or a sandwich or whatever.  Adelaide and Caedmon love those days.  Atticus decidedly does not.


He was certainly excited today when his sister decided to make a pie to celebrate Pi Day, 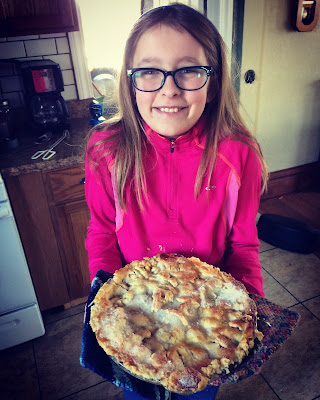 but what really got him going what the fact that I was making a new recipe tonight for supper.

Now, normally any announcement of new recipes is met with groaning on the part of our children, seasoned with a judicious amount of tearing the hair from their own scalps.  It doesn't matter how many times I reason, "All your favorites dishes were once new recipes," they act like I am trying to poison them when something unfamiliar is on the table (to be fair, there have been times when I thought poisoning might be preferable to the crap I've ended up with after all that work).

For some reason, however, the sound of BBQ Chicken, Apple, Bacon, and Cheddar Quesadillas was perfectly suited to his 8-year-old palate.  He was so excited.  So pumped.

The explanation for his agitation is this:  I won't make food I don't like.  There have been times in the past when I made a new dish, one or two of the members of our family enjoyed it, but I did not.  This means we are not having it again, unless someone else wants to make it, in which case, be my guest.

To Atticus's immense relief, I loved the new quesadillas.  So did Derek.  So did Atticus.  Adelaide and Caedmon tried it, but ended up opting for their standard chicken and cheese quesadillas, because they have boring baby taste buds.  I did not say this to their faces.

Luckily for all of us, it's spring break, so it's easier for me to make sure I've made something "hot" most nights. This includes a new recipe for beef stew with homemade bread here in a couple days, because if it's going to snow during spring break, I am at least going to get soup out of the deal. 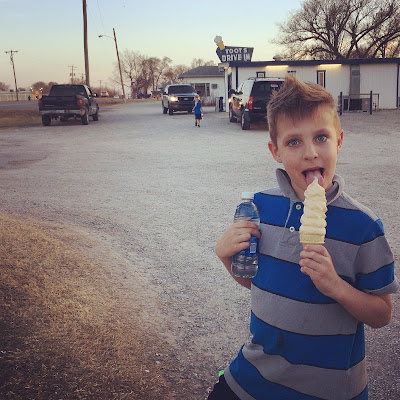 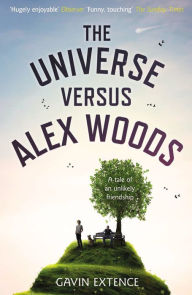 The problem is I'm having trouble putting to words why I liked it so much.  I didn't agree with much of anything the author had to say (via his characters) on a philosophical or existential level, and given the nature of the plot, there's a lot of both in there.  I really did enjoy the characters, though, from the protagonist who is hit by a meteorite as a child (and no, this novel does not fall within the fantasy genre) to the crusty, cranky widower with a penchant for Vonnegut.  I guess it's the same with some friends:  You have completely different viewpoints, to the extent that you sometimes look at each other and say, "It is so surprising to me that we are friends," but hey, you like the person.  Just as I like this book.  (Man alive, just when I think my book reviews couldn't get any more meandering and circuitous, I find a new way to do anything but get to the point.)  And here, a barely related image that I nevertheless find amusing. 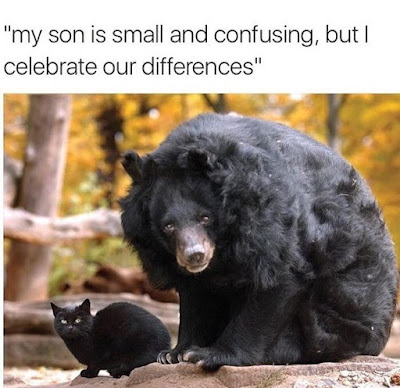 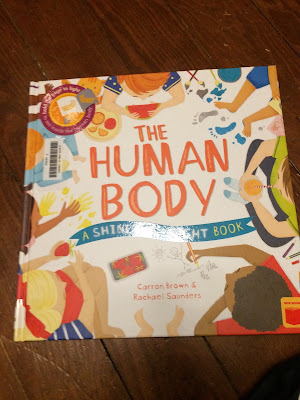 Pardon the shoddy photography; I am, as ever, a poor photographer.  This is one of the Usborne Shine-a-Light books, a series that includes such titles as Secrets of the Rainforest, On the Space Station, and the above, The Human Body.  They take children through the subject matter by showing them pretty if rather standard illustrations, 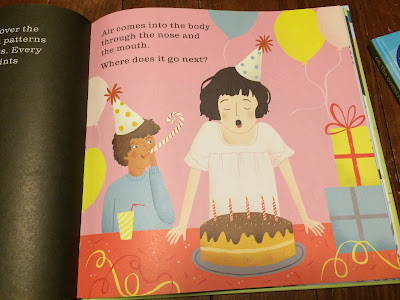 but then have the reader shine a flashlight- or hold the page up to a light- and discover what's beneath the surface. 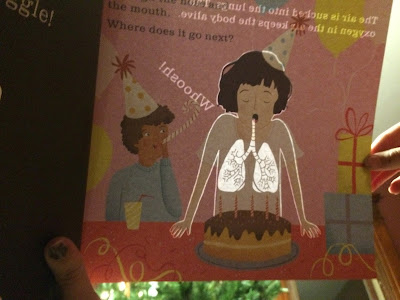 The reverse side of the page includes an explanation.  It is awesome. 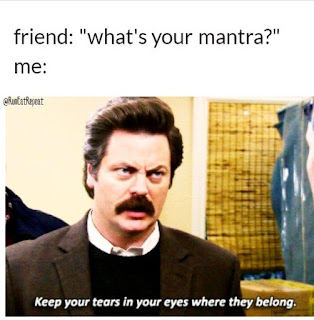