Caedmon came downstairs this morning wearing shorts and a tank top and shivering.  "Why is it so cold?" he asked as he chattered his way over to me and tried to steal what little warmth I had by wrapping his skinny arms around me.

"Because it's 55 degrees outside."

"But it's SUMMER VACATION!"  He was adorably indignant.  Don't tell him I said that.  He still hates to be called adorable or any of its synonyms.  Even if he is, especially like just now, when he came inside telling me he's scared to go back out into the shed.  When I asked him why, he said that "I heard a rumbling sound while I was in there!"

"What do you think it was?"

"Well, it was either my stomach, or something scary.  So I'm not taking any chances."


In end of school year news, all of our children survived.  Adelaide won the fifth grade spelling bee.  I was delighted for her.  She was conspicuously underwhelmed.

Atticus ran 32 miles throughout the spring in Mileage Club, an activity sponsored by a local hospital where volunteers track how many miles participating students choose to run at recess.  It's his highest mileage to date, and he is thrilled.
As a matter of fact, this is his first season to make it to 25 miles, finally earning him the eye-searing t-shirt above.  When I asked him if he was excited to finally get that t-shirt, his answer was, "Kind of.  I'm kind of excited about it, but kind of not, because I know when I grow out of it, Caedmon will get to wear it even though he didn't earn it."

I probably should have tossed some parental pearls of wisdom his way, but I couldn't as I totally get what he's saying.  I feel the same thing when I see leftover marathon finishers' tech shirts at athletic outlet stores, wondering who the heck would buy those when they're clearly meant for people who actually finished those specific races?

Adelaide had a couple music concerts, including band. 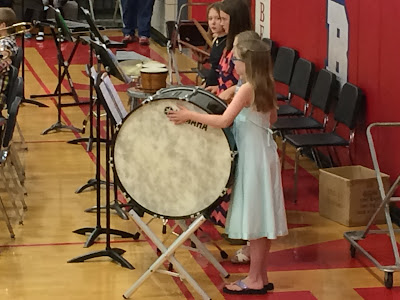 We got to watch her perform on a variety of percussion instruments.  She still enjoys band, and we enjoy watching her.  My eardrums already seemed less likely to spontaneously implode out of sheer self defense at this concert compared to her first five months ago.  Apparently elementary school band members improve at a rapid rate- well, that and they already shed the people who quickly discovered they didn't want to be there.

Caedmon was dragged around to this and all kinds of other events:  the life of the third child.

The boys are currently attempting to dislodge a badminton birdie (shuttlecock?  Is that the right word?  I feel like I could be making that up) from the roof of the shed, so when, just now, I heard what sounded like a gunshot echoing through our neighborhood, I jolted out of my chair and out the door to make sure our boys weren't responsible for said noise.  Never mind that we don't actually own a gun, or that they're using a jump rope to coax the birdie off roof; I feel like stranger, more inexplicable things tend to happen when they're within four feet of each other.  Gah, my heart is still racing.

I guess it really is summer vacation.

Posted by The Crislers at 5:03 PM No comments:

If you're thinking to yourself, Gosh, lately it seems like most of Kristy's posts are food-related, well, that's because they are.  Anymore it feels like my biggest chunks of time not spent at work are somehow tied up in food.  Shopping for it, looking up recipes for it, making grocery lists for it, prepping and cooking supper or making school lunches, cleaning up in the aftermath.  These children seem to expect food to go into their mouths every dang day.

Because working my tail off while everyone else goes about their business breeds resentment and makes me act downright hateful, I usually rope someone into supper prep with me.  Most of the time this person is Adelaide.  That is because Adelaide is the easy choice.  She enjoys cooking and baking (except when she abruptly doesn't), she is responsible, and she takes around one thousand percent less oversight in the kitchen than her brothers.  Plus I just like her.  She is funny, and insightful, and fun to be around.  (Except when she's abruptly not.  She's like her mother that way.)

Unfortunately easy doesn't always equal right, especially over time.  I've chosen the easy option for so long that at this point, neither Atticus nor Caedmon have the culinary abilities their sister did at the same, respective ages.  This sucks.

This has all been slowly dawning on me for some time now, but our family has also been in a fairly significant season of change over the past nine months as I went back to work and we all adjusted to new schedules, new expectations, new lots of things.  There were certainly times, especially at first, when this is how I felt when concerned family and friends asked how I was doing: 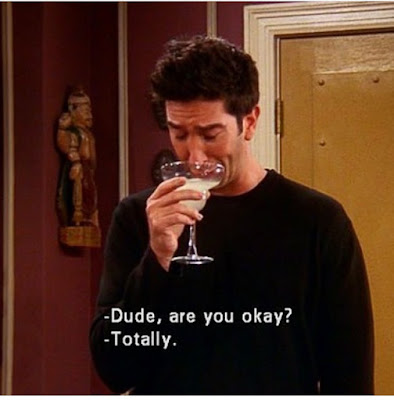 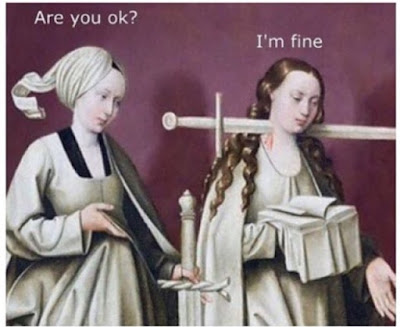 Getting the boys in the kitchen with me just wasn't a priority.  Heck, it's still a near-daily basis that they ask, "Did you go to the store today?" and my response is, "Exactly when would I have done that, sweetling?"

But now that we've all more or less found our footing in this brave new world, I recently decided it's time to get all the kids into cooking with me.  And because I am sometimes a world class idiot who doesn't consider the wisdom of taking swimming lessons before jumping into the deep end of the pool, last week I panicked and said, "ALL the kids into the kitchen to help me with supper!"  I know there are only three of them, but there's some kind of mysterious transformation that takes place when you put more than one of them into the kitchen at the same time, and by "mysterious transformation" I mean

"I wanted to turn the burner on!"

"Why does Adelaide always get to put salt and pepper on things and I don't?"

"He's stirring way longer than I got to!"

until I turn into an angry panda chef.

We did finally end up with our pork chops with garlic and wine sauce over mashed potatoes, but nothing was hot, nobody was happy, and for some reason I felt slightly ill for the next three days after consuming half of my pork chop.

My takeaway from all this?  Pork chops are only meant to be cooked on the grill by Derek.  If you think about it long enough and allow all reason to vacate the premises, this makes sense.

Anyone else feel like this is making me sound like I'm trying to lure little German children into my gingerbread house?


Then last night I had a dream I was trying to make my way across a balance beam, no doubt brought on by my late night pondering on that whole kitchen balance thing.  But the balance beam was made of mashed potatoes.  In waking hours, I have excellent balance due to yoga, but my dream-state balance was otherworldly, as I made my way across those mashed potatoes just fine.  Jung would no doubt say the mashed potatoes represent civilization's oppression against feet and my incredible balancing act represent my struggles to overcome procrastination or something else completely insane that is nonetheless reprinted in psychology textbooks every year.  I think I just really like mashed potatoes, especially with roasted garlic mashed into them, because otherwise why bother?