On the eighth day He created Soccer Camp. And it was good.

If we were to sign Adelaide up for soccer camp, the results would be marked and severe.  We can barely get her out into the backyard for a family game of fútbol without groaning and tears and the ever-present question, "Why?"  (Or, more accurately, "WHHHHHYYYYYY?") The answer to this being a sensible, "You have been reading for nearly four hours.  That is why you have a headache, and don't feel well, and are, ahem, the tiniest bit cranky.  Come outside, breathe the air, and interact with the human race for thirty measly minutes."  So soccer camp would no doubt be seen as akin to trying to kill her clean off.

Our boys are a different story.

When the opportunity arose for them to attend a camp staffed by British college students studying to be soccer coaches (because evidently that is a thing you can major in outside of the United States where we more or less collectively suck at soccer, at least on a world stage), both jumped at it.

I didn't really know what to expect.  I had a couple friends whose children had participated in this camp in the past and had nothing but praise for the organization, but the coaches change every year and, to my mind at least, you'd have no way of knowing whether or not you're going to get stuck with a real stinker of a coach for five straight days, two hours each morning.

Thankfully, no stinkers made their way to Iowa last week.  All the hallelujahs.

The boys were pleased, I was pleased, Adelaide was... maybe not pleased, but certainly helpful, as she escorted the boys between the library and the camp most of the week.  Most tellingly, Derek was pleased, and as a former soccer phenom, he is by far the most difficult to please of us all.  He said their skills and drills were good, the scrimmaging was good, the [insert words he could have made up for all I know] was good.  Good!

I got to attend their final day of camp, and was so impressed with our boys.  I mean, I'm impressed anytime they don't cringe away from a ball flying toward them, or scream unnecessarily when a ball flies toward them, or watch a ball as it pointlessly rolls past them- all things I have been known to do in middle school P.E., in high school P.E., and last night in our backyard.  I am nothing if not consistent. 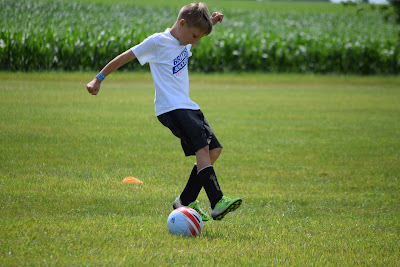 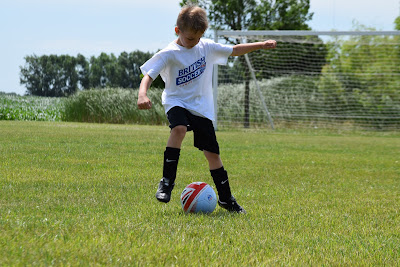 And they looked so happy to be out there.  The befuddlement was thick in the air around Daughter and me.

I mean, look- here Caedmon finally managed to get it the ball past the goalie, Coach Mark.  He is thrilled. 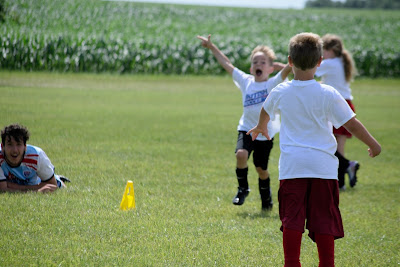 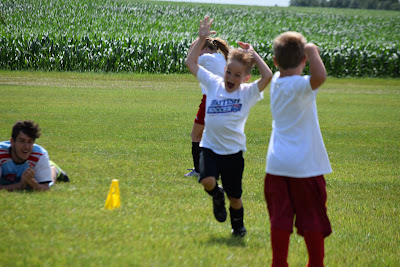 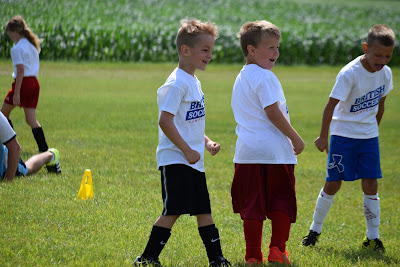 That's not to say that never had a similar expression on my face before.  Holler "CHEESECAKE!" and watch me fly. 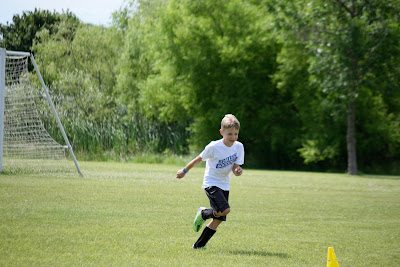 Happy to be playing soccer, I mean.  Not the cheesecake thing. 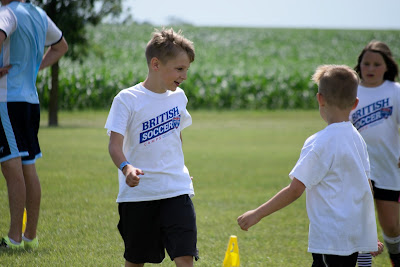 Honestly, it was downright bewildering.

The boys also learned some unexpected things, like what the coaches referred to as "party tricks," 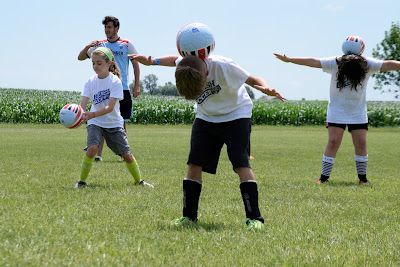 and that they speak English in England.  (Atticus to me:  "Mom, if Coach Isaac is from England, how can he speak English?"  Oh, sweet boy child.  How terribly and adorably American of you.)

Every once in a while, though, I'd see a little of myself in the boys. 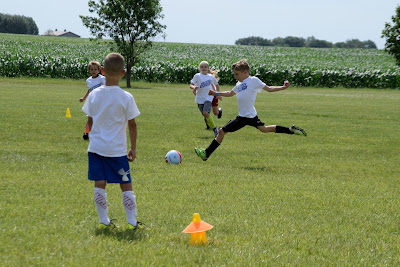 That extension!  That pointed back toe!  Why isn't this boy in ballet?

If that gif shows anything, though, it's that there seems to be plenty of drama on the soccer field, or football... pitch?  Field?  Stage?  Anyway, who needs Giselle when you have this

and of course this?

Although I see that last one and think, "Poor guy!  He just found out his childhood best friend finally lost his battle with cancer."  Because all this emotion can't be for a game, right?  (Raise your hand if you're wondering how thirteen years of marriage to Derek the Rabid Minnesota Vikings Fan has taught me nothing.)

One moment while I pull myself out of the whirling vortex of gifs I just allowed myself to be sucked into.
.
.
.
.
.
Okay.  I'm back.

So:  Soccer camp was good, nay, fantastic, our boys learned a lot about soccer and where our language comes from, and I thanked the good Lord above that in this case, Derek's genes prevailed. 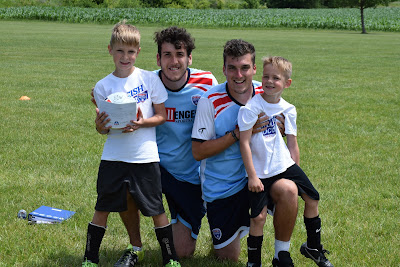 
Big, juicy, soccer-y thanks to Derek's parents for gifting the entrance fee to the camp as our boys' birthday presents.  It was obviously a success!
Posted by The Crislers at 6:49 PM 2 comments:

I'm going to be honest:  I will not be sorry to see the backside of June.

What's supposed to be a warm and somewhat carefree month has been cooler than usual and full of unexpected change.  No me gusta.


Still, there have been good pieces to this month.  I got to go see my sisters and their families. 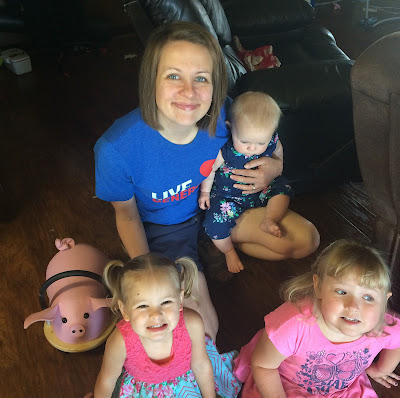 I am evidently an exhausting house guest, as most of my six nieces passed out toward the end of my stay at each house. 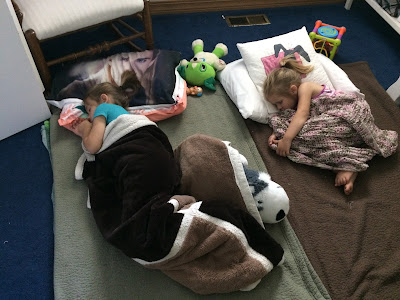 I spent most of that visit trying to cram as many words as possible into the time with my sisters, and marveling at how each niece is so unique.  Growing up in a family as one of three girls, and seeing my mom- also one of three girls- with her sisters, you would think this wouldn't be quite so astonishing, but you would be forgetting how slow I sometimes am.  Both of sisters now have three girls of their own, and each child is so different, there is no lumping them into categories.  Their natures refuse to let this happen. 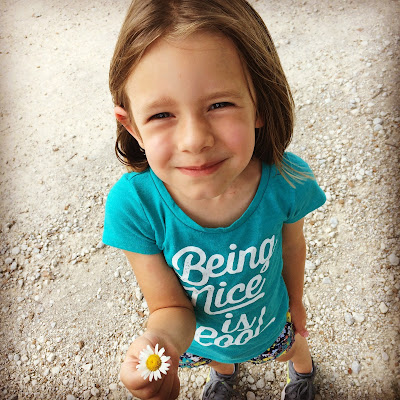 This is the one who started it all, who made me realize that being an aunt is ah-mazing, as you get to do all that playing and cuddling and marveling at their traits and personalities without having to ask yourself regular questions like, "Just how much did I screw them up today?" and "Hmmm, what are the chances they'll remember that?  Hopefully very, very small."  Instead you just get to try and smother your laughter when they're sassy or naughty, although this is especially difficult when they're being just like their mother and it's all you can do not to say, "Man, I remember that glare appearing on 5-year-old Kelli's face."

I also swung by southeast Kansas and got to spend some time with my grandparents.  Hallelujah. 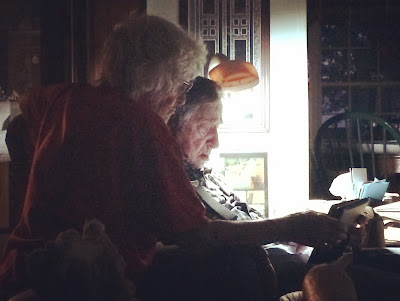 I was unable to get solitaire working again on my grandpa's iPad, marking me as a failure of a granddaughter.  Grandma saved the day by helping Grandpa figure out how to play on her iPad, but only after making him promise "not to get cranky because it's different and you have to learn something new."  Grandpa promised, possibly because he would swear anything to get his hands on the solitaire.

Grandpa also dug up carrots and onions for me to take home.  Anytime I tried to help he waved me away, never mind that it felt shameful to watch an 88 year old work while I just stood there. 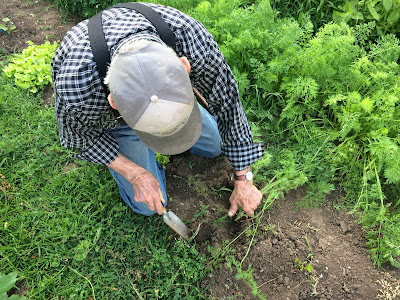 So I took a picture, because that's better.

I also spent an inordinate amount of time staining wood for a big project we've had going over the past several weeks, which deserves a post of its own.  Also needing their own posts:  the boys' soccer camp, running stuff, and a State of Our Yard Address.  Putting it here means it will happen... right?

Also, our kids are still the cutest. 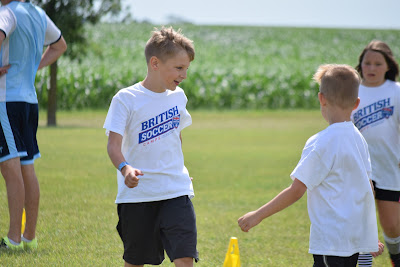 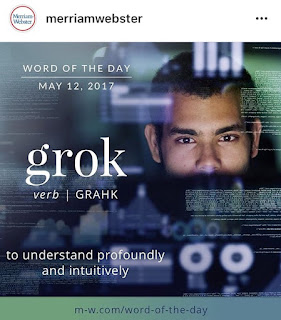 Can you imagine using this in a sentence around people?  "I don't know what it is about tulips, man- I just grok them."  They'd think you were crazy, throwing random nonsense syllables into what was a normal conversation.

This, of course, means I'm going to try using it at the library today. 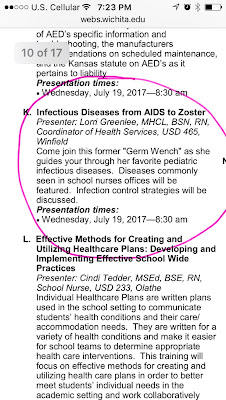 Why, yes, that is my mom presenting it, because who else has favorite pediatric infectious diseases?  Or refers to themselves as a "former 'Germ Wench'"?  I can promise the whole thing will be a hoot, and am currently taking bets on how many times she mentions hand-washing.

Pre-test:  Who can tell me three things that are wrong with this combatant's hand-washing technique?  I am not even kidding, and I promise my sisters know. 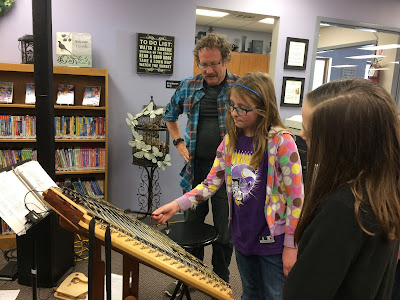 I believe she enjoyed listening to Mr. Greenlaw play, and it was so generous of him to let everyone fiddle around with the instrument, but if I'm being honest, the carrot cake was probably her favorite part. 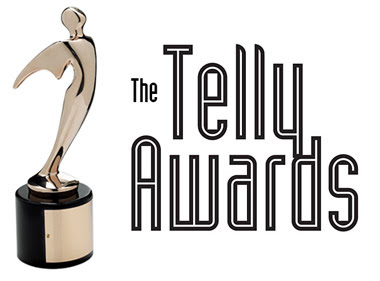 He won a Telly!  What's a Telly, you ask?  It's a big ol' honking international competition with thousands and thousands of entries and only the best win the good stuff.  I did not take that from their website.

I believe I've shared his winning video before, but just in case, here it is again (and before you say, "Resource Recovery Plant?  No, thanks," well, this is actually interesting and will make you question what your own community does with their trash):