Stories for Two Out of Three

I have yet again had a talking-to with myself and said that I am not to let this little piece of the internet waste away with but a single post a month.  We've been busy little bees-

and speaking of bees, those things stinging our children were not bees but the vile and depraved YELLOW JACKET, and once I took the time to do two seconds of investigating I found that why, yes, there was a hole in the ground with a steady stream of black- and yellow- banded winged insects streaming into it, and if I hung around for more than two seconds that trend would reverse itself and a steady stream of those same insects would begin filing out, heading straight for my own apparently threatening body.  The internet is divided on what to do about this, so thus far I have fallen back on one of my greatest strengths and done nothing.

- so, yes, busy little bees we have been indeed, with both the boys having birthdays and turning different ages, which is helpful for me because all three are now back to their evenly-spaced, stair-step ages, so I don't have to look like a terrible mother when people ask me how old they are, as I stand there and try to remember just what age our own children are right now.

Adelaide seems to be feeling the full eleven-ness of her eleven years, which I will explain with a small story:

There was recently a lock-in at our church for sixth graders.  Adelaide was willing to go and participate, but kept bemoaning the fact that it didn't start until 9 p.m., and didn't those leaders understand that only gives her around two hours of fun?  I tried to explain that the point is to try and stay up all night, to which she responded with a harrumph and more grumbling about needing her sleep and how kids her age need a good 10-12 hours a night and are the youth group leaders responsible adults or not if they don't understand that?

But off she went, towing her sleeping bag and pillow, fully planning on using both to good effect.


I picked her up the following morning at 8 a.m.  She was holding two doughnuts and a full package of Oreos.  The youth group leader told me he was pretty sure she hadn't slept at all.  She confirmed this.

I knew what this meant.

Adelaide is right to put a priority on sleep.  She does and has always needed plenty of sleep, for with proper rest she is her usual delightful self, but without, she regresses in age by around 70%.  And sure enough, halfway home she burst into tears because I laughed too hard at one of her jokes.  Derek suggested she stay home from Atticus's soccer game to sleep, which she did, but then we attempted to rouse her for the afternoon, not wanting throw her sleep schedule off any further.  What we got for our efforts was a vengeful she-beast who wailed every time she was reminded that no, no, she mustn't go back to sleep, she must stay awake for her own good.

Eventually self-preservation won out and I did let her lapse back into slumber for the bulk of the afternoon.  By Sunday she was more or less back to normal, so I suppose it all worked out.


Atticus has been running around playing lots of soccer, of which I have zero pictures.  He has scored the majority of goals for his club soccer team, of which I have zero pictures.  Does this mean they revoke my soccer mom card, or did that automatically happen when I told Derek I still don't understand what "offsides" means?  At least it looks like I'm in good company:  a google search of "soccer offsides" gave me a bunch of results, naturally, topped with "How to Understand Offside in Soccer:  11 Steps," "What is the Offside Rule in Soccer? -dummies," and a 4-minute YouTube video of a soccer coach trying to explain this rule.  No wonder!  You're going to lose me in any situation that it takes 11 steps or four minutes or whatever to explain a sports-related rule.

Other than photo-less soccer, Son the Elder has also been harvesting his sunflowers for seed so he can plant more in the spring, because he really does love to grow them. 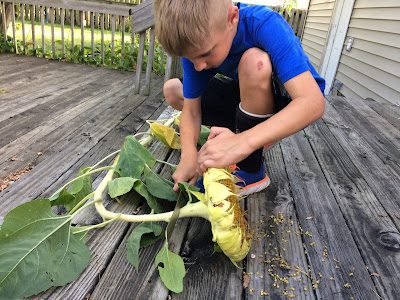 Note that he wears his shin guards to do so.  This is both practical for gardening and so that he can return immediately to soccer after finishing.  And regarding the knife:  I've found that even my more reluctant gardeners are more likely to join in when I tell them they can use a knife at some point.  This kid merrily sawed away at all our sunflowers, some to dry for seed, some to leave on the table on our back deck to try and draw the birds in closer.


We do still have a third child, and he has been doing things, but darned if I can remember what they are.
Posted by The Crislers at 5:51 AM