We've started the welcome process of taking down all our Christmas stuff.  I can say "we" because I recruited Daughter to help gather all the holiday stuff and place it in a designated location, so I'm not finding things my eyes apparently slide right past throughout the spring and summer.

She promptly broke the "flame" off of one of the battery-operated candles we place in each window, rendering it non-functioning.  She has been relieved of her duties.

This was one of the first things to go: 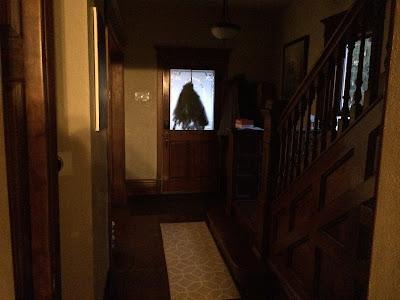 It's a bundle of pine boughs I cut from our giant pine and looped with a buffalo-check scarf, hung on the front door.  From the outside, it's festive and charming; from the inside, I startled every time my peripheral vision caught sight of what was surely a large, hulking man peering in at our family goings-on.

We are also evidently building shelves for our pantry today.  We went and bought the lumber for it yesterday, and Derek keeps talking about measurements and notching and other things my brain glosses right over.  What this brain does understand is that while Derek does mystical things with the wood in the freezing basement, I will be painting the pantry a nice, bright white, all the better to see the truly alarming number of cans of Ro-Tel we apparently possess. Why do we have so much Ro-Tel??

Although, if we're being honest, it's not Ro-Tel, it's Casa Mamita Diced Tomatoes and Chiles, which is the Aldi version of Ro-Tel.  Also we have so many cans of the stuff because I buy it.  Mystery solved.

We hauled the crappy wire shelves that came with the house and that we've lived with for 8 1/2 years out of the pantry last night, and the floor underneath got a proper scrubbing for the first time since I was pregnant with Caedmon and had to chisel a dead mouse embalmed in Karo Syrup that had tipped over at some point during the night and embalmed the mousy corpse in sugary goodness.

It's a laugh a minute around here, is what I'm saying.

So now the pantry is scrubbed and awaiting paint, which I suppose I have put off for long enough in writing this post.  Blogging is good for so very many things.

Big Fat Update- Kind of- and a Winter Hike

Well!  Long time, no blog!  It's hard to force myself to spend any extra time on the laptop when I'm now working on it for hours a week at one of my new(ish) jobs.  I hesitate to even mention it, because the company I work for is super weird about confidentiality and constantly reminding its employees that THIS IS PRIVATE INFORMATION and TELL NO ONE and IF YOU TALK WE WILL COME FOR YOU IN THE NIGHT.

I'm kidding, of course, about at least 40% of the previous sentence.  Good luck figuring out which part.

And no, I'm not in an abusive professional relationship, and no, I was not recruited by the CIA.  Just typing that last phrase made it hard to type this one, because I'm giggling somewhat madly at the idea of working for anything like the CIA, what with my utter lack of a poker face, ability to get lost in a cardboard box, and penchant for giggling madly.

Really, though, I've found a meme that describes at least one aspect of this work rather well.  Thanks, memes. 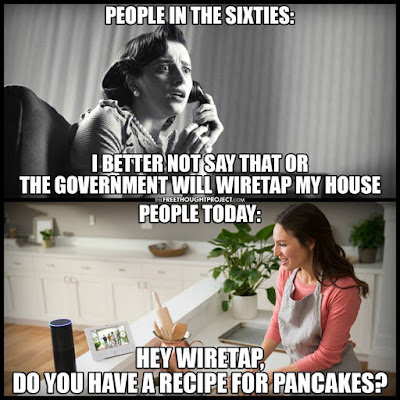 Still, I'm not ready to finally put this blog out of its misery and kill it off, so I'm declaring (yet again, somewhat wearily) that I will be attempting to post with some degree of consistency!  Just like I did in ye olden days when our chillins were little and nap time equaled blog time!


Um, let's see.  It's cold here.  Yay, Iowa.  Derek and I have agreed to jack our house's temperature all the way up to 70 degrees to combat this forecast: 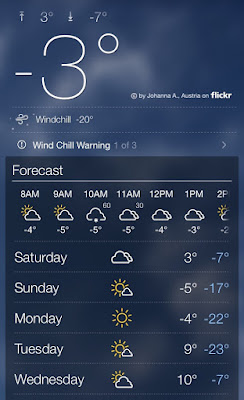 I don't think I'm really allowed to complain about today's temp, as the high is supposed to be above zero, but tomorrow and Monday, look out:  I will say what I want.  You get to do that when the temperature isn't supposed to be above zero for days.  It's in the Iowan handbook.  I have no idea what's in the Minnesotan handbook for negative temp days.  "Congratulations, it's Tuesday, now get back to work"?

Because we knew this cold front was on its way, I took the kids on a forced march through the snowy forest preserve yesterday, although I charmingly called it a "Winter Scavenger Hunt" because they tend to balk at anything that calls to mind gulag-like conditions.  Maybe all three of them were Russians in their former lives?  Never mind that I don't believe in reincarnation. 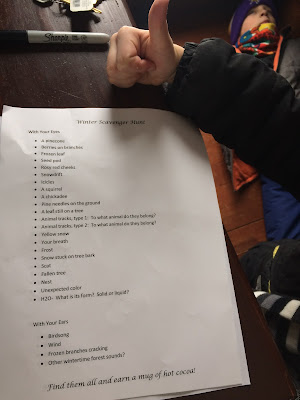 Seen above is the list of things we were going to be hunting for on our hike, a thumb belonging to Caedmon, and a face belonging to Atticus.  Pop quiz:  Which of our children is still young enough to be fooled by exercise disguised as fun? 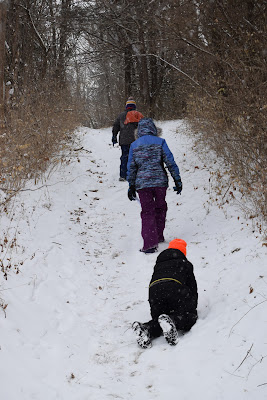 Really, though, what is it about children and their inability to stay off the ground?  Even now, at any given public space that we enter, I'll turn around and at least one of them is rolling around on the ground.  I don't know what this is about.  They like getting the crap from other people's shoes in their hair?  Children have a better barometer for what's better for their bodies than adults?  I mean, who can tell? 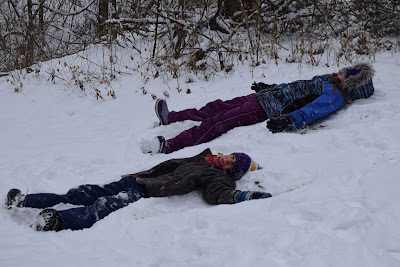 Oh, look, they're on the ground again.  Imagine that.

Lest you think our hike was all fun and games and our lives are snow-winter-perfection, may I submit this photo for your consideration: 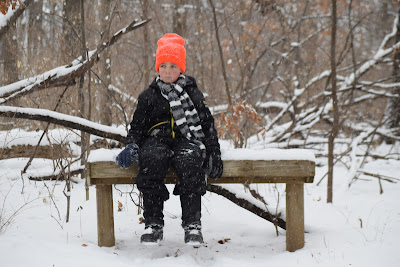 He had just learned we not even halfway through our hike.  That is not a happy face.

Not to worry, though, he got back on the ground- well, onto a log over a frozen creek bed- and everything was better. 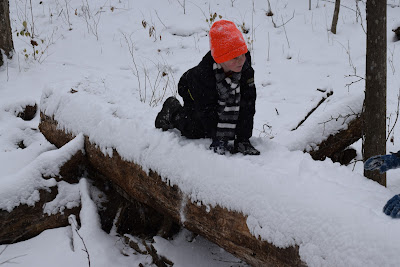 We made it back to our vehicle, I mused aloud that we could make another loop through the preserve, as we'd only been out for around an hour, and Atticus climbed a tree in protest, saying we could go but he'd stay and take a nap in a tree.  We've read The Little Match Girl four times in the past month, so he knew how this would end. 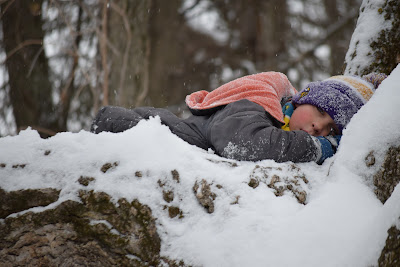 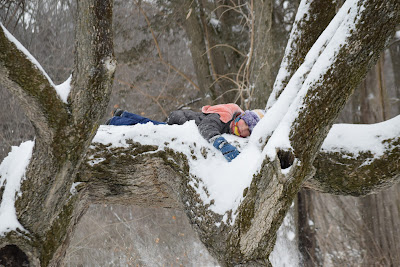 In the end we did not go 'round again as I decided we had properly celebrated temperatures in the teens, so we went home, the kids got hot cocoa, and I got to be the adult and stay outside for another hour shoveling and waiting for the plow to charge by- for our more southerly friends, the snow plow drives by so fast it throws all kinds of snow from the street up onto the sidewalk that you have to shovel that mess, too, so you're not really done until it's gone by.  It did not complete our street until after I had come inside and hung up all my wet snow gear.  Naturally. 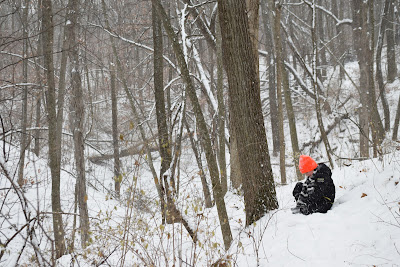