Our family recently went ice skating.  It was the kids' third time ever, my second, and Derek's hundredth.  Or something.  The point is, he's been a lot, the children and I have not.

As such, Derek is very steady on his skates.  Adelaide and I actually skate quite well, for novices, whereas Caedmon takes a while to master his fear and let go of the wall.

Atticus, meanwhile, continually hurls himself across the rink at high speeds, inevitably falling in a flailing and sprawling of limbs. He is never seriously hurt, usually smiling as he gets back up.

I, on the other hand, fell twice in the two hours we were there, and now have a bump at the base of one of my fingers, where digit meets palm, which hurts when pressed on, and which one of my friends has given a layman's diagnosis of a bone chip caused by these falls.  This is apparently the difference that 25 years makes in falling. 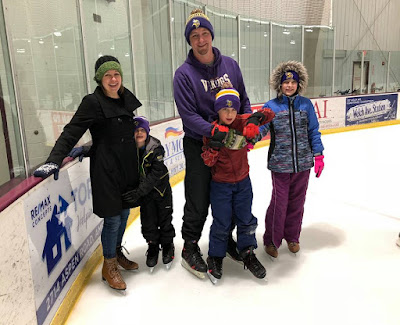 Just a few years ago I was pretty good at falling; I had frequent practice, tripping every few months while walking or running throughout my life, and had learned a way to not fall quite so hard.  With increased yoga practice, though, my balance has improved dramatically, to the extent that I can no longer recall the last time I fell.  Barring the time I strapped blades to my feet and went coasting along on a sheet of ice, of course.

I've been reading a lot about falling lately, in large part due to this book that we got at the library several months ago. 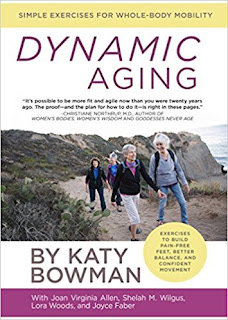 I don't think I'm within the intended audience age bracket for this book, but I can't help it:  I still found it helpful, and it's caused me to re-evaluate the way I do a number of things in my life.  I think my favorite part is that the author recruited a group of women, who call themselves "goldeners" and who are all over 70, all of whom went through Bowman's program and benefited greatly from it.  There are sections throughout the book written by these women, where they talk about what led them specifically to the program, or about things they found they could no longer do, and how the exercises or shifts in movement helped them, along with any number of other things that I can't think of without the book in front of me.  In short:  it is so good.

In the book Bowman states that fear of falling is just as crippling as actual falling and outlines a series of exercises addressing this, which I apparently need to incorporate into my daily routine.   Also, I want to take one of the classes featured in this New York Times article.  Do you think they'd let me in?  And who wants to pay for my flight to the Netherlands so I can fall with the elderly?  That's not a euphemism.

For now I'll just treat every run as an opportunity to potentially practice my falling; we've been covered in snow and ice for a while now, with only a couple days above freezing to allow any melting.  I've tried running on the treadmill at our local gym, but anything more than ten minutes on those things makes me want to go full Office Space- Printer on them.

Yes, that is an imperfect analogy, as the treadmills don't enrage me by malfunctioning; I just can't abide spending copious amounts of time on them without being overcome with feelings of worthlessness and resultant, irrational anger, usually going something like this: "I'm not going anywhere.  I'm not getting any of the benefits of being outdoors.  This entire enterprise is utterly meaningless.  Life is meaningless." So, I run outside, even though yes, it is very cold out. 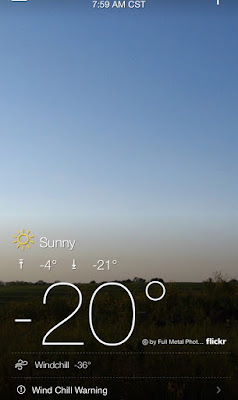 At that point I find I have exorcised what may be some underlying anger issues for yet another day.   Life once again has meaning!  Huzzah!
Posted by The Crislers at 2:20 PM