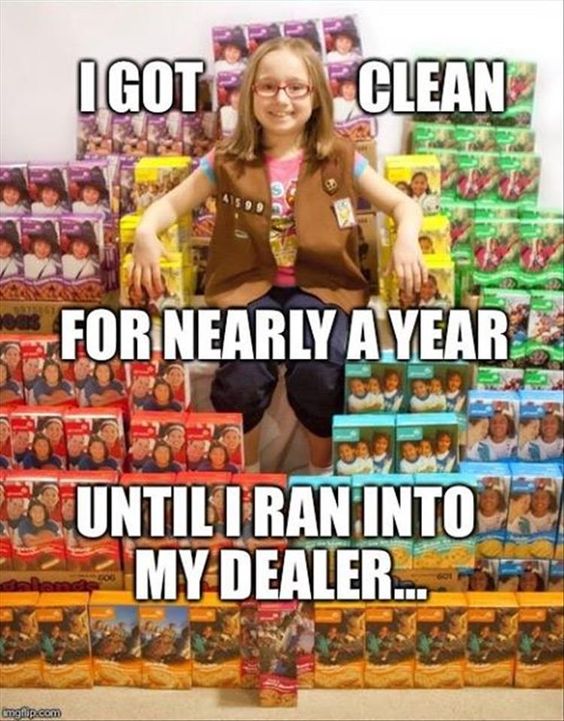 Every grocery store, walking through the neighborhood, everywhere.  You know how you just want to grab whatever it is you forgot for supper and go, but first you have to shuffle past the rickety tables surrounded by pig-tailed entrepreneurs?  It's so bad Derek has dubbed it "the Girl Scout Gauntlet."  We bought our four boxes- so why do I still find I can't make eye contact with them?!

The one good thing about all this winter-masquerading-as-spring nonsense (or would it be spring masquerading as winter?  Whatever, something's not right) is that it is still totally, completely, unarguably soup season.  When it's cold out I will have soup at every dang meal (yes, including breakfast, as the older I get, the more I seem to enjoy eating leftovers for breakfast.  I neither know nor care to know what this means.), and since I'm still the principal chef in this house, this means my family finds themselves spooning soup down their chilled little gullets at least once a week throughout the winterish-fall, winter, and winterish-spring.  Why only once a week?  Well, as it turns out there are four other people in this family, none of whom quite match me in my fervor for soup (soupish fervor?  Ew, never mind.), unless maybe it's our favorite recipe for potato soup (although keep in mind that the recipe I linked to barely feeds our family of five admittedly big eaters).  Even when I'm making vegetable-heavy soups, though, complaining is kept to a minimum by a thousand-yard death stare and a peace offering of homemade bread.  I like this recipe, because it's no-knead, takes five whole minutes to put together the night before, and is crusty on the outside, soft on the inside (which is also the way I like my- ew, never mind).  I added some leftover olive oil and rosemary asiago cheese to this one, and HOLY SAINT HONORÉ (the patron saint of bread bakers, and thank you very much, Catholics, for not leaving out the glutenous among us), DOES IT SMELL AMAZING. 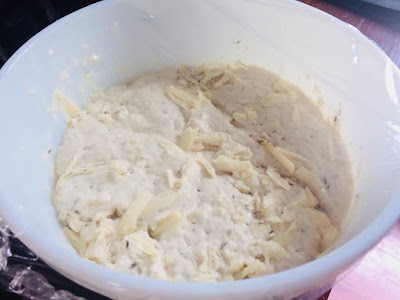 If you're saying to yourself, "Gosh, that looks scrumptious," then you need to get your eyes checked. My food photography skills are three solid steps down from lackluster, but please just trust me when I say that it smells yeasty (in a good way) and cheesy (in a good way) and will help me coerce our children into eating a bowlful of onions, peppers, and corn (PW's corn and cheese chowder recipe, but I omit the bacon and sub milk for half and half 'cause dang, Ree, it can't be good for you to eat bacon every day).

We're on the cusp of soccer season, which means my meal planning is about to go down the drain and I'll be even worse about responding to texts and other messages than usual.  I don't understand those parents whose children are involved in every activity under the sun.  How do they cope?  Or, possibly the more accurate question, what are they on?  Because the soccer season is pretty darn short, I know, and it almost does me in every time.  Plus I show up at half the games eating a bowl of chili or bierocks or whatever because Caedmon's games are always at suppertime and very little can successfully come between me and my food.

Now that we have practices and games and such on the schedule it's time for me to break out the giant, color-coded family calendar again so that we all have half a prayer of showing up to the right place on the right day- but when I went to to put it in its appointed place on the desk, I remembered the latest thing Derek and I have signed ourselves up for that will no doubt be great long-term, but short-term?  It simultaneously fills me with excitement and makes me want to cry tears of self-pity. 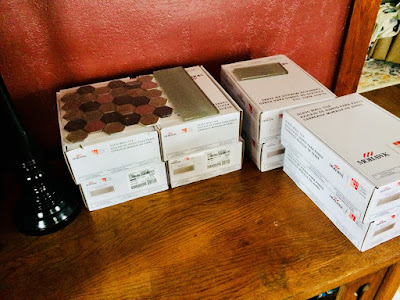 That's right. Those are boxes of tile.  Eight of them, because either a) our current shower is old and gross, b) as a couple Derek and I enjoy punishing ourselves, or c) all of the above.

If you were a student of dubious ambition whose test-taking strategy was "when in doubt, 'c' out," then congratulations, it's worked for you again.  Our current shower is both significantly past its prime and in need of replacing, and we hate ourselves.  You may remember the last time we tiled a surface in our house, our still-loved kitchen backsplash, the memories of which have developed a gentle patina in my mind to the extent that I'm willing to shrug and take on a "once more unto the breach" attitude.  At least I was before searching out that old tiling blog post.  That was a lot of bloodshed on Derek's part and sleep-deprived, half-maniacal laughter on mine.  But those boxes are heavy, and I really hate returning things, so...
Posted by The Crislers at 5:58 PM 1 comment:

"Hey- just what have you been doing that makes you too busy to blog?"

Oh, you know, same old, same old.  Giving our nine-year-old Pop Rocks candy for the first time and watching him freak out.  Then laughing hysterically rather than comfort him. 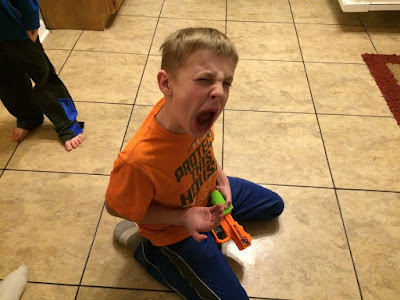 We're also finishing up our spring break, which we celebrated by discovering that the auger won't turn on our snow thrower, making the ten inches of unexpected snow we received early this morning somewhat problematic. Thankfully, there are five of us capable of scooping and shoveling, and a very nice neighbor with a fully-functioning thrower who descended upon us in our hour of need. Never fear, mint chocolate chunk cookies have been baked as payment. 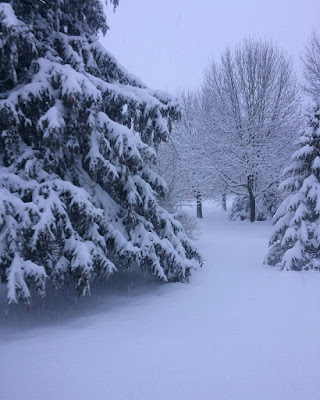 Pretty.  Also wet and heavy, as temperatures were right around freezing.  But pretty.

When we weren't at the library this week, I was trying to expose our children to a little culture via the sculpture park in Des Moines.  They ignored the artwork and repeatedly rolled down the embankment.  It would seem that we just can't help but raise savages. 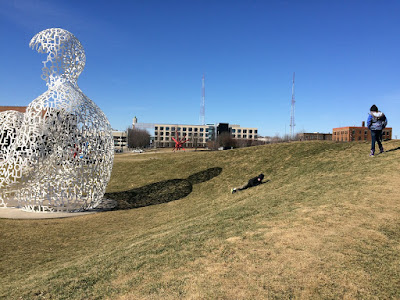 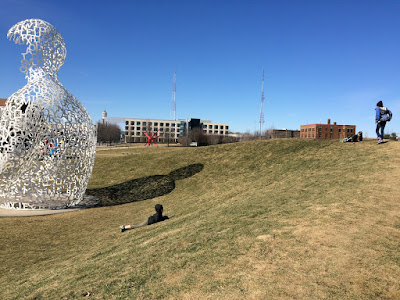 Then we went home and they did science experiments, so I guess we're doing something right, however accidental. 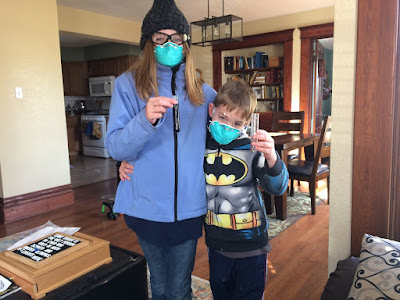 I enjoyed the sculpture park, anyway, and will now regale you with tiny tales of my most and least favorite sculptures:  my least was the one of the naked woman, not because there was anything wrong with it, but more because our boys kept veering close to it, giggling madly while Adelaide harrumphed in eleven-year-old girl superiority.  My favorite was this one: 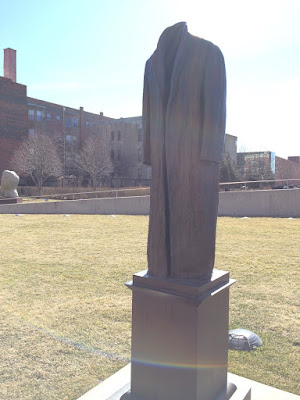 It reminded me of the book The Invisible Man, which in turn gave me the heebee-jeebees because man, what a weird book.

Atticus's favorite was the newest sculpture of a polka-dotted squash, which I found to be both whimsical and depressing, as we are at that time of year when I start to believe I will never see anything growing and alive outside again.  In short, I am a delight to be around.  As usual. 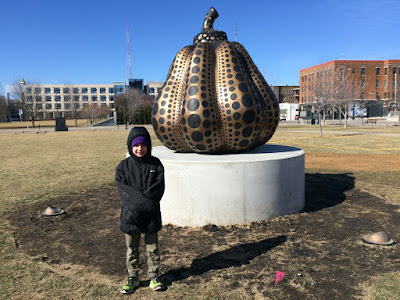