I'm Sure It'll Turn Out Fine

The roads are slick but my coffee is warm and today's high temp is several degrees above zero- no small thing this time of year.

Let's just get this out of the way:  middle school.  I hated it the first time, and I'm not exactly pleased with it the second.  Not that I have to traverse its halls every day; no, that falls to Daughter now.  All we have to do is deal with the emotional fallout every evening, which is super.  Basically it's a continuation of elementary school:  learning how to get along with a set of diverse human beings markedly different from yourself, but now, with hormones!

One of the good things we're finding about middle school is that there are increased extracurricular opportunities for our less than athletically- inclined eldest child.  When they're younger, around here kids can do sports, or they can do 4-H, or they can do sports.  Now Adelaide is venturing out into the wilds of jazz band and choir, the latter of which includes a school musical this spring.  This is proving to be a learning experience for us all.

These wee seventh graders are undertaking a production of Beauty and the Beast, Jr.  What makes it a "Junior" version, you ask?  Not a clue.  No kissing at the end?  Gaston doesn't swallow a bunch of whole eggs?  All of the participants freak out about having to touch each other, even while playing a part in a stage production?  I mean, pick one.  Adelaide auditioned for several roles, but we all breathed a sigh of relief when she got her part of choice- that of Lumiere- because she had gone to great pains to reassure us that her life would be OVER if she was cast as pretty much anything else.  A teeny, tiny, masochistic part of me hoped that she would get a different part as all this kind of talk was communicating to me that she has much to learn about being a gracious loser and making the best out of less than ideal conditions.  Honestly, though, that lesson has been hammered home in other parts of her life (field day every single spring, and P.E. several days per week), so mostly I was happy for her and the peace of our family's life when she got the part.

What I didn't consider upon first hearing her joyous news, however, was the costume.

Those five facts do not coexist in harmony.

So here's what we have so far:  gold leggings.  A gold bowtie.  A men's suit jacket from Goodwill.  An excess of confidence in my tailoring abilities.

We still need a bunch of things, but chief and most worrisome among these are her candlesticks.

Are you now remembering that Lumiere is a candlestick?  Daughter Dearest has to keep her hands up by her head for the bulk of the musical, arms at 90-degree angles, which will surely make for tired shoulders but whatever, okay, that's her problem, and besides, she's twelve, she'll bounce back in right around 20 minutes, no matter how sore she gets.

On both those hands need to be fake melting candles, with fake flames, big enough to be seen by the audience, oh, and mom, I'd really really like it if they actually lit up!

Google returned disturbingly few helpful results.  I can either make something that takes one hour and looks like trash, or I can go to a trade school, become a licensed electrician, and only then be able to follow along with the Lumiere costume how-to YouTube videos I found.

The closest thing I found to any kind of middle ground is this: 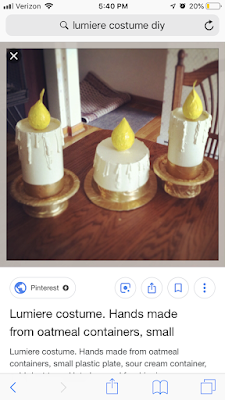 First of all, I don't plan on making a candle for her hat, because I believe in setting healthy boundaries.  Second of all, I found this via a google image search, but the description on how to make it was cut off, and when I tried to find the original image and website, it was no longer available.  So what I know is that I need oatmeal containers, sour cream containers, small plastic plates, white paint, hot glue (for the wax drippings), and gold tape.  What I can't figure out is how they made that flame!  Papier mache? (Mentally add your own accent marks to that second word, there, I don't have time to copy and paste- I have to turn our twelve year old into a candle!  A french candle!)  Balloons?  A good old-fashioned Catholic miracle?  Who knows?!

I also don't know how she's going to keep those on her hands.  Lumiere does a fair amount of gesticulating, and as comical as it would be to me if one of her candles flew off and hit the Beast in the face, I'm pretty sure she would be mortified, so I need to figure out some kind of internal handhold.  And making them light up?  Do I mount little LED flashlights in there?  Incandescent flashlights so that there's a potential for a real fire?  (Exciting!)  Fairy lights wrapped around that flame I still can't figure out?

I'm sure we'll finagle some kind of solution, but for now my plan is to craft something absolutely horrendous-looking in the next week, convince her this is the final draft, then let her persuade me into trying again so that whatever we actually end up with will come as a relief and look satisfactory to her eyes.  See also:  my entire parenting philosophy.