First off, I feel I should deliver an update on Daughter's performance of Lumiere, given my last post.

She did so well!  She sang, she danced, she spoke in a French accent that was still understandable- a real worry of mine weeks before the performance, when I tried to gently remind her that yes, she was supposed to be French, but the audience still needed to be able to understand the words coming out of her mouth.

As for those candlesticks:  she made around 80% of them herself.  Did the hot glue drippings, the painting, glued toilet paper tubes inside so she'd have something to grip- nearly everything.  The only thing I helped with were creating the papier mache flames.  That and tailoring that blasted men's suit jacket from Goodwill.  It hung on her like a garbage bag when we first got it, and silly me thought it would be a relatively straightforward matter to extract the oversize shoulder pads, amend the lines of the opening and way it hangs, add gold filigree, and so on, and so on.

After copious seam ripping and repeated plunges into the bowels of the jacket, however, I realized that men evidently require a lot of padding in their clothing.  Then I got mad thinking about how you would never find this in women's clothing; our fabric instead trends toward the uncomfortably sheer.

As for the musical itself, well, we listened to Adelaide wail about how poorly practices were going and about how this person kept storming off stage and how that person couldn't even be bothered to show up for the (hours long) practices- etc, etc.  Our expectations for the outcome of the show lowered accordingly each time she uttered such a critique, so said expectations were subterranean by the time we arrived at opening night.  But somehow, through seventh grade magic or possibly just lots and lots of hard work, those kids pulled it off.  It was so entertaining.  Adelaide and her friends acquitted themselves admirably, and we were so proud.

Also of note:  my sister Kelli and her family braved predictions of a winter storm, car problems, and the reality of sticking three tiny children in a car for hours and hours to make the drive up and surprise Adelaide that weekend.  I got almost no pictures while they were here, possibly because I'm a terrible sister/aunt, but mostly because I was trying to soak up every second of their presence. 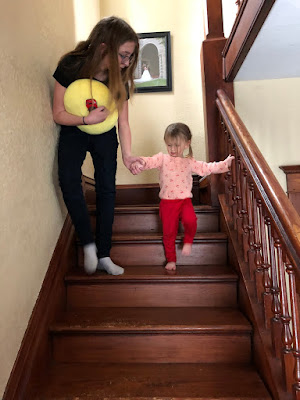 That is our giant daughter carrying all the toys Kate felt she needed from the second floor down to the first while also making sure she made it safely downstairs.  Please also see that the shirt Kate is wearing is one that Adelaide wore when she was that little.  Which was forever ago, but simultaneously three seconds ago.

Just two other details pertinent to the story of that weekend:

One: people approached me after both performances multiple times to tell me that they didn't at first believe that Adelaide was a girl.  She was so convincing as a boy, they claimed, from the sound of her voice as she sang to her mannerisms as Lumiere!  My response to this the first couple times was to laugh, but after that I wasn't sure what the appropriate response was.  "No, please, you're too kind"?  "I bet you get that all the time, too"?

Two:  Adelaide's dear friends got friendship necklaces, which they presented to her that weekend.  They look like matching puzzle pieces that, when fitted together, read "Always together, never apart, maybe in distance, but never in heart."  (Commas added by yours truly because why on earth wouldn't I?)  The girls gave her this because she's been struggling with the fact that our family is moving.

More on this tomorrow. 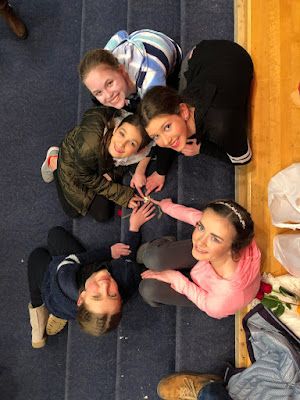