Last night, Caedmon and I began listing aloud all the improvements Derek has made to this house since we moved in last June, because list-making is a fun pastime.  Our youngest was born with this truism etched on his heart.  That, or he's seen me making one bajillion lists over the course of his lifetime and it rubbed off.  The former sounds nicer.

I don't feel bad writing out the list here the way I would if I forced you to listen to my recitation; you're free to skim the list at will and it will likely take you seconds.  If I did this verbally, I would no doubt pause periodically to wander down myriad rabbit trails with side stories and side-side stories.  I am not brief when writing and even less brief when I story-tell aloud.  At least in this format, you have a choice and don't have to find a polite way out of the conversation.


This isn't even going into building a few Ikea storage pieces and aaaallllll the electrical work he's done throughout the house.  This place was a deathtrap, I swear, with its knob and tube wiring and non-grounded outlets and who knows what else.  (Derek does.)  We've also had a few things professionally installed because Husband knows his limits.  As do I.  Our limits for home improvement projects are just very different.  Joanna Gaines, I am not- but if you need book recommendations, I'm your gal!  (Laughs weakly.)

I've been combing through our various before, during, and after photos for some of these projects Derek has accomplished and plan on writing a few posts describing them.  I'll try to avoid excruciating detail, but that's really not something I can realistically promise.  Actually, wait- yes, I can!  Since I was at work while 90% of the labor involved in these things was done, I don't even really know what all went into most of it, just that I would arrive home and a new light fixture would be up, or I could see progress on the bookcases, or whatever.  I will also be sure to tell you the one minor service I provided with each one, often involving paint, in the same way a child will wave their hand in the air and cry, "I halped!"


Also:  we've been in the house just a few days shy of nine months.  It's like all this drilling and sawing and hammering and measuring and on and on is Derek's version of gestation.  He's been gestating DeWalt tools.  Or hang on, I feel like I'm using this metaphor imperfectly- is it the projects that he's been gestating?  Is the book case I'm currently looking at his project baby?  Since he worked alone, was it immaculate conception?  (Did things just get weird?  I think things just got weird.)


Look here:  in the time since I wrote all the previous words early this morning and right now, Derek began and finished another dang project.  He says he loves switching out light fixtures because it's "quick and easy and such a drastic change."  I would call him a liar but he does make it look easy, even with the decrepit wiring in this house that he's slowly bringing into the 21st century.  And so:  behold!  One fewer boob light in this house! 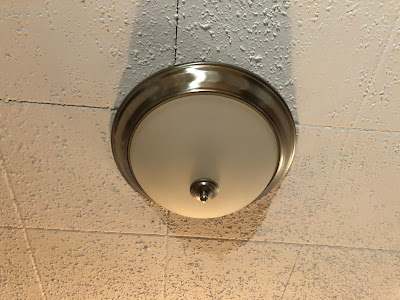 Full disclosure:  this isn't the actual light he took down.  He began this project before I could take a "before" picture, so I walked ten feet to the side and took a picture of another light that will someday be replaced. 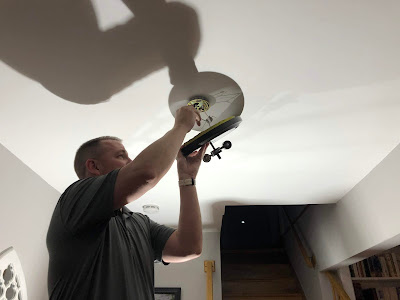 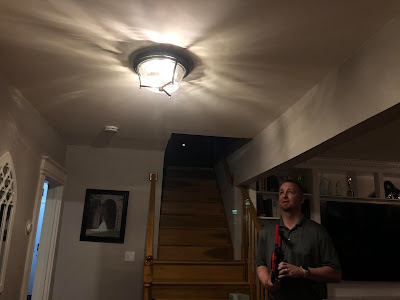 Tadaaaaa!  Look how happy he looks. 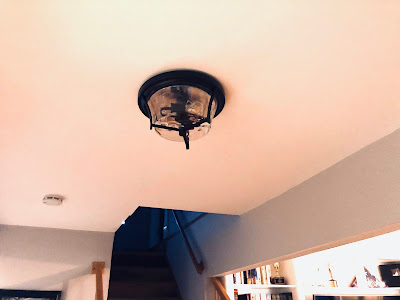 I wanted to get a picture of the new light fixture without the light bulbs on, but as it turns out when you turn the light off it gets darker in the room and I was too impatient to wait until morning when we had some natural light, so the coloring on this is wonky because I edited the daylights (haha) out of it on my phone.  But... behold!  Our new fixture, wavy glass, Edison bulbs, and all, and Derek's newest product of gestation!

I promise I'll come back with a better term.