My mother is a nurse.

She is respected both in her field and in my hometown.

When I was young she worked as an infection control nurse.  This means as a young child I was not allowed to drink out of public drinking fountains and was discouraged from shaking people's hands.

Sometime in the midst of my elementary school years, she changed fields and became a school nurse (to middle schoolers, no less, proving she harbors some mild masochistic tendencies).  This means that unless on the brink of death, I got very little sympathy for various injuries and maladies.  It also meant that her affectionate pet name for my sisters and me was "vector."

My high school had slightly less than a thousand students spread over four grades.  This, coupled with the fact that my mom worked in the school system, meant that many of my fellow students knew whose daughter I was.  That in and of itself is not unusual.  What was odd was that at various times during those four years, one classmate or another would approach me and begin describing a list of symptoms they were experiencing.

"Okay.  Well, actually, I wanted to ask you something.  I have a really bad headache, and my face feels kind of swollen here and here, and when I tip my head like this I can't breathe and my cheeks really hurt... so what should I do?"

At this point, several things would float to the surface of my mind:  Sinus infection, Common cold, Why isn't this person asking a medical professional about this?  Decongestant or Ibuprofen...

Instead of contributing anything worthwhile, however, I would  find one of two pieces of advice springing to my lips- the same advice my mother invariably gave me.

It didn't seem to matter how sick I was or from what I was suffering, this was always, always, always her reply to my queries.  These phrases have become a long-running joke between my sisters and I, a parody of the conversations we've had with our mother:

"Hey, Mom, my ear kind of hurts, and it feels really hot and painful..."

My poor mother has the misfortune of being a parent to three sarcastic, smart-aleck girls.  Here's the kicker, though-

My allergies are killing me, I feel my throat closing and I'm wheezing up a storm.  Guess what helps better than anything else?  Taking a shower.

My stomach hurts and nothing I'm doing seems to help.  The best medicine?  Going for a walk.

This revelation has been coming on for awhile now, beginning when my daughter was just a few months old.  She was suffering from her first major cold, and had that awful, croupy cough infants get.  I didn't know what to do for her, and even though it was nearing midnight, called my mom.

"Mom, Adelaide's really sick.  She's coughing and seems to be having trouble breathing, especially when I lay her down... what do I do?"

"MOM!  I'm not kidding here!"  I was panicking in the way that only a first-time mother is capable of, and didn't appreciate her feeble attempt at humor.

"Kristy, I'm not joking.  Go run a hot shower.  Sit in the bathroom with Adelaide, keep the door closed, and let the room fill up with steam.  This should make it easier for her to breathe and help loosen up some of that gunk in her chest."  (She uses the word "gunk" a lot.  It's a technical term that I think you learn in nursing school.)

The shower worked.  As it almost always does.  And now, when Adelaide starts whining, "Mommy, my tummy hurts,"  I know exactly what to say. 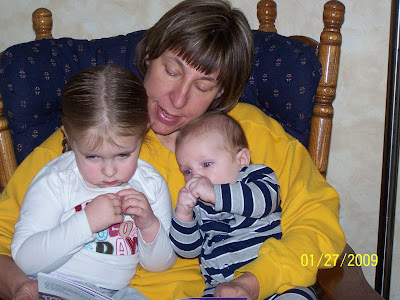