Several times a week, I get emails about how to be a better blogger or how to improve your blog or how to market your blog.  I ignore 99% of these, but today, when I saw the subject line "30 Post Ideas to Try," I decided to give it a whirl.  29 of them didn't really speak to me ("Share your playlist from Spotify"- What is Spotify?  "Create a guide to blogging or SEO"- What's SEO?  And why am I consistently ignorant about things that are apparently common knowledge to everyone else?), but that 30th one, well, it was made for me.  And by "made for me," what I actually mean is "made for someone who lives in an interesting city," which is actually not me.  Don't get me wrong:  I love our little town.  But when the blog post idea is "Create a vacation guide to the city you live in," you get the feeling maybe they're not talking about Nowhere, Iowa, population:  3,000.

Still, I was really struck by this idea, so we're going to go with it.

(Quick note:  The name of our town is not actually Brave New World- hereafter referred to as BNW- but if you do know the actual name of the town and you remember anything from your high school sophomore english class, you'll get this fun literary reference.  You know what, though?  I actually really like the name 'Brave New World' for a city.  Anyone know how to petition to have your city's name changed?)

Food:  Would you believe that you have four- FOUR- eating establishments to choose from in the thriving metropolis that is BNW?  (Five if you count Dollar General, which of course you should.)  You can choose to dine at ye olde sandwich shoppe (aka "Subway"), one of TWO not-dirty gas stations (both of them Casey's, so they do make decent pizza), a recently opened mexican restaurant that I've never eaten at but most likely isn't as sketchy as it looks on the outside, or a barbecue restaurant that is actually completely delicious and definitely your best bet for food you're actually thinking about putting into your body.

Entertainment:  All I can say is I hope you like watching corn grow.  And the smell of pigs.  (As for the former statement, according to Derek's mom you can actually hear corn grow in the summer because it grows so fast, but it has to be on a completely still, windless day- good luck finding one of those- and as for the latter statement, any pig farmer worth his salt- aka bacon- will tell you "That's the smell of money.")

Accommodations:  While BNW doesn't technically (or non-technically, for that matter) have any hotels, motels, or charming Bed and Breakfasts, you, of course, are always welcome to stay in the guest room at the Crislers!  (I haven't run this by Derek yet, so for now this will just have to be a secret between me and the internet.  Fortunately for me the internet has a terrific history of keeping secrets.  It is also a reliable source for all your medical decision-making needs, fyi.)

Now, we don't have a website like most motels do, but I'd be more than happy to give you an idea as to what to expect should you decide to take advantage of the luxe guest quarters awaiting you at la Casa de Crisler.

Most traditional motels have a lobby to welcome you into their space.  We- and by "we" I now mean "you," of course!- have this: 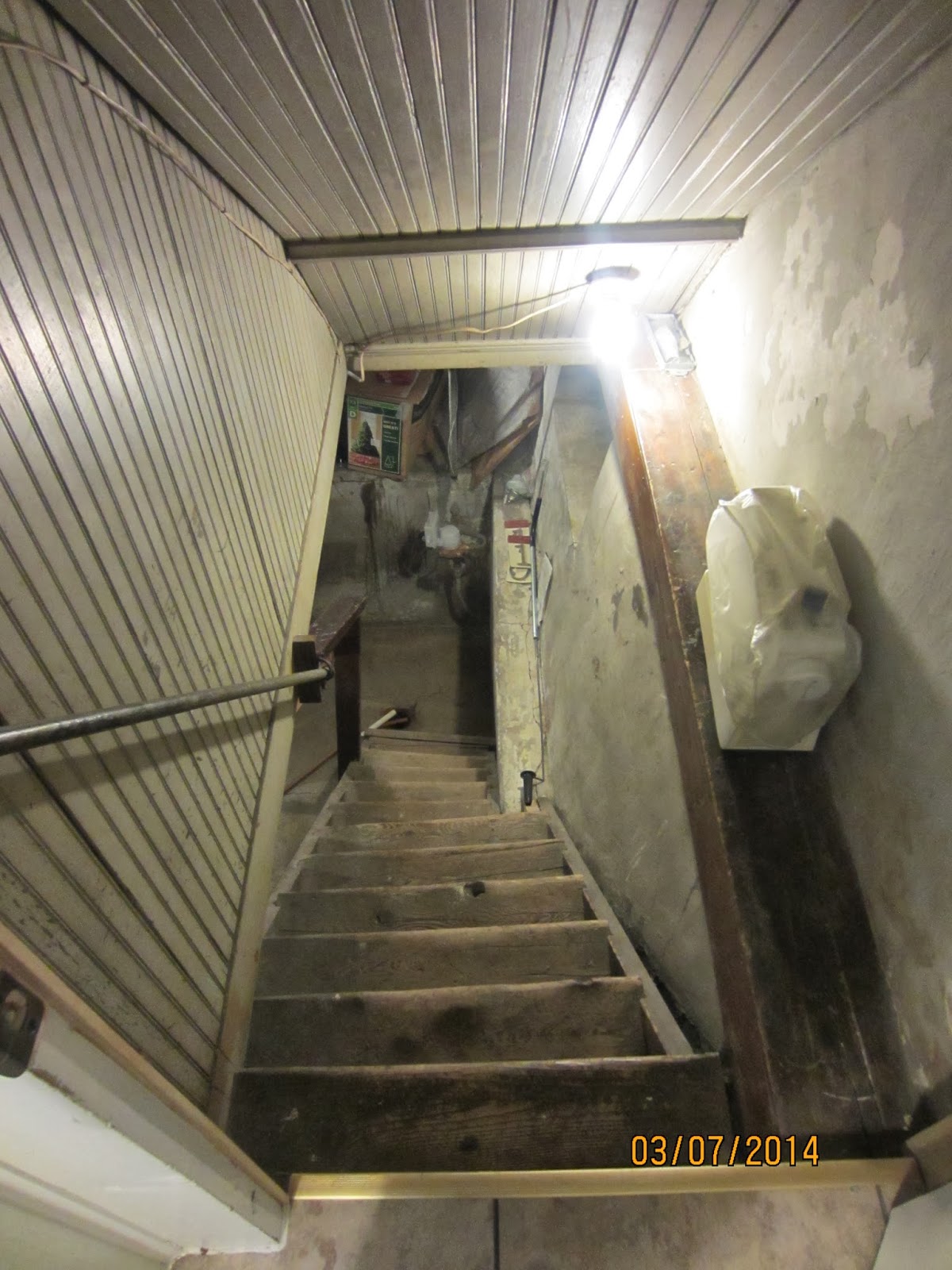 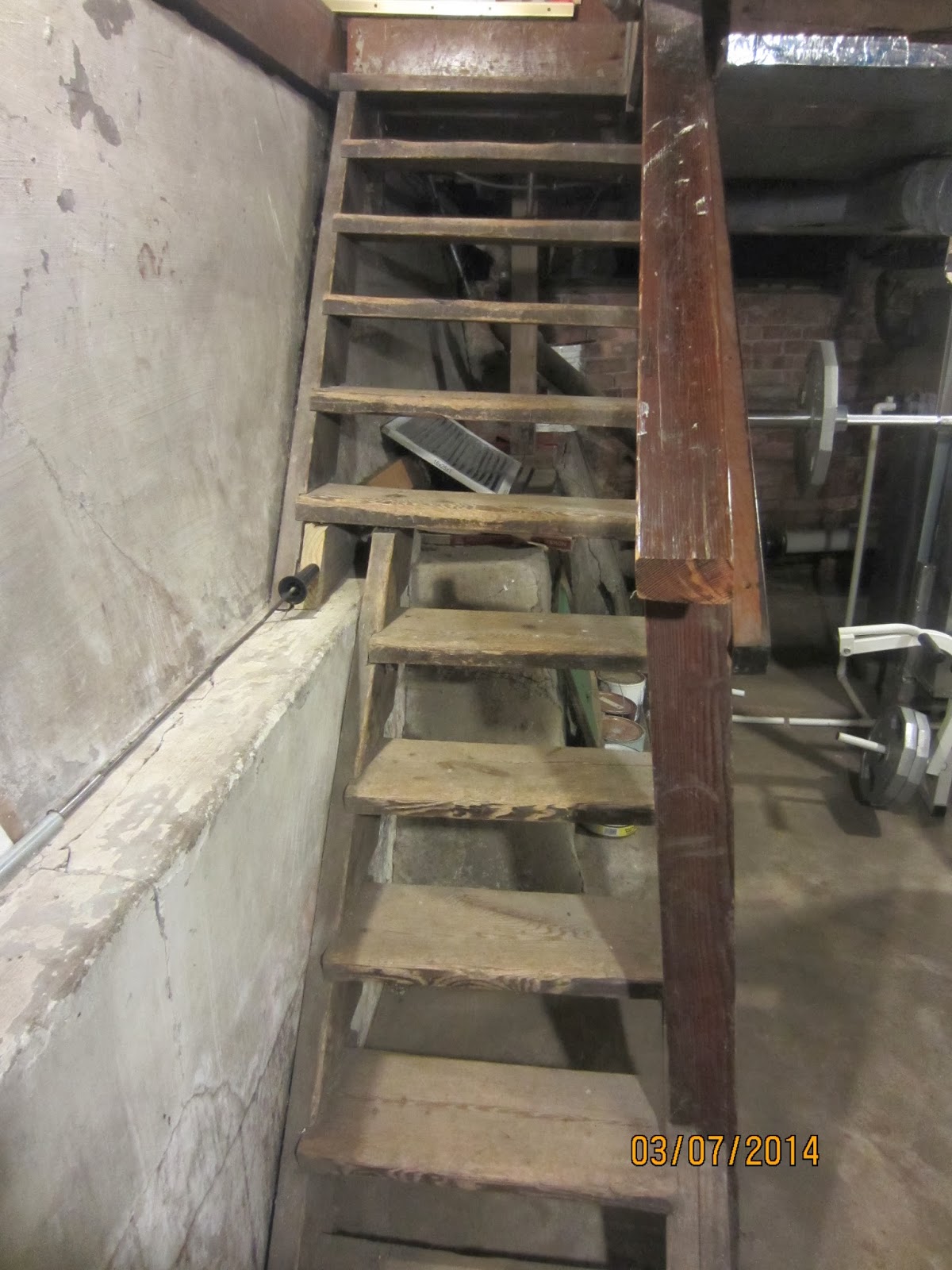 That's right!  And it has been 67 DAYS since our last incident on these stairs!

Next up:  your bedroom/ the coal room! 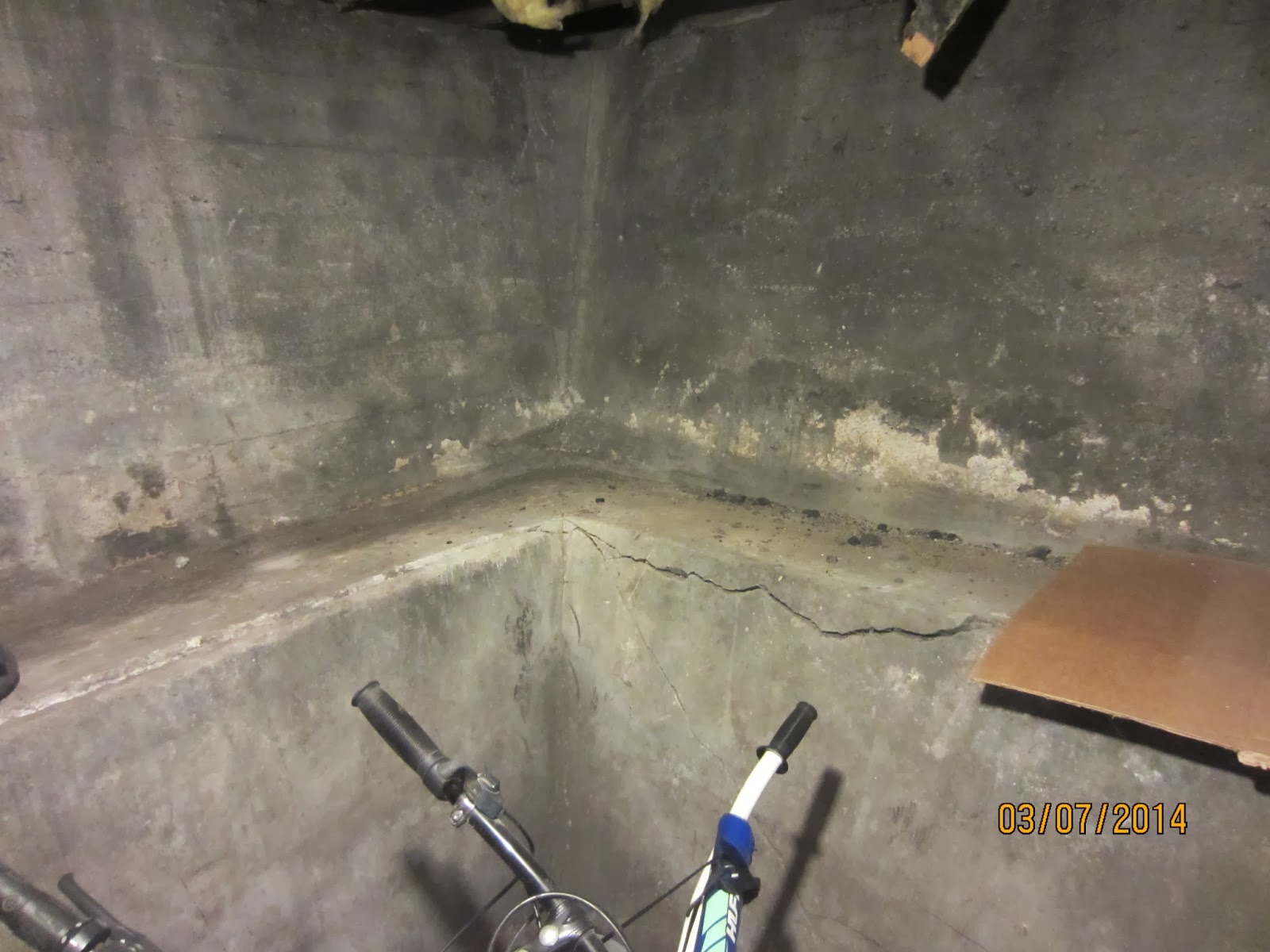 Obviously, in this shot I don't have the linens ready, but rest assured, when you arrive, I will provide you with an ample supply of whatever blankets I don't mind getting old coal dust and soot on. 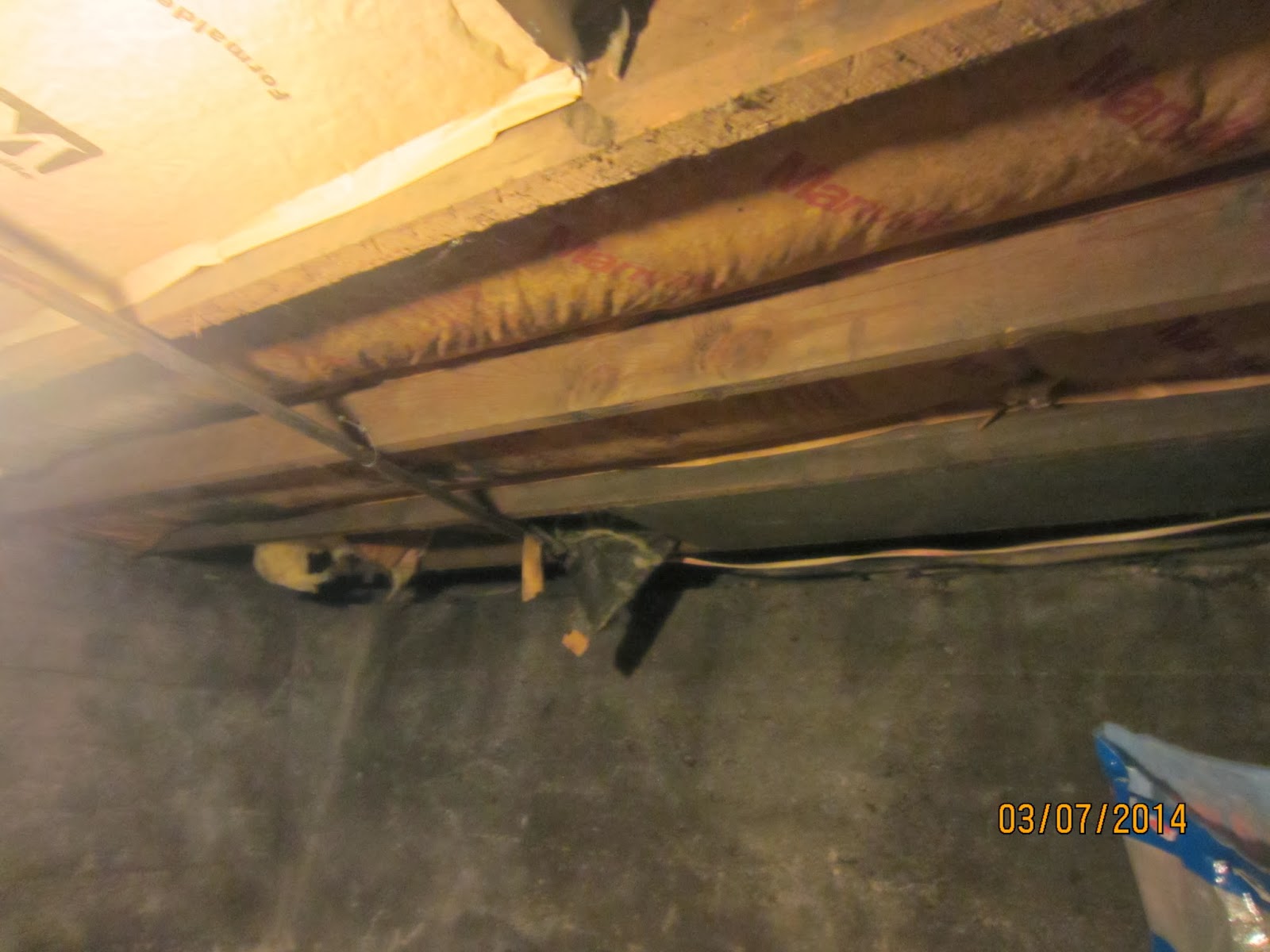 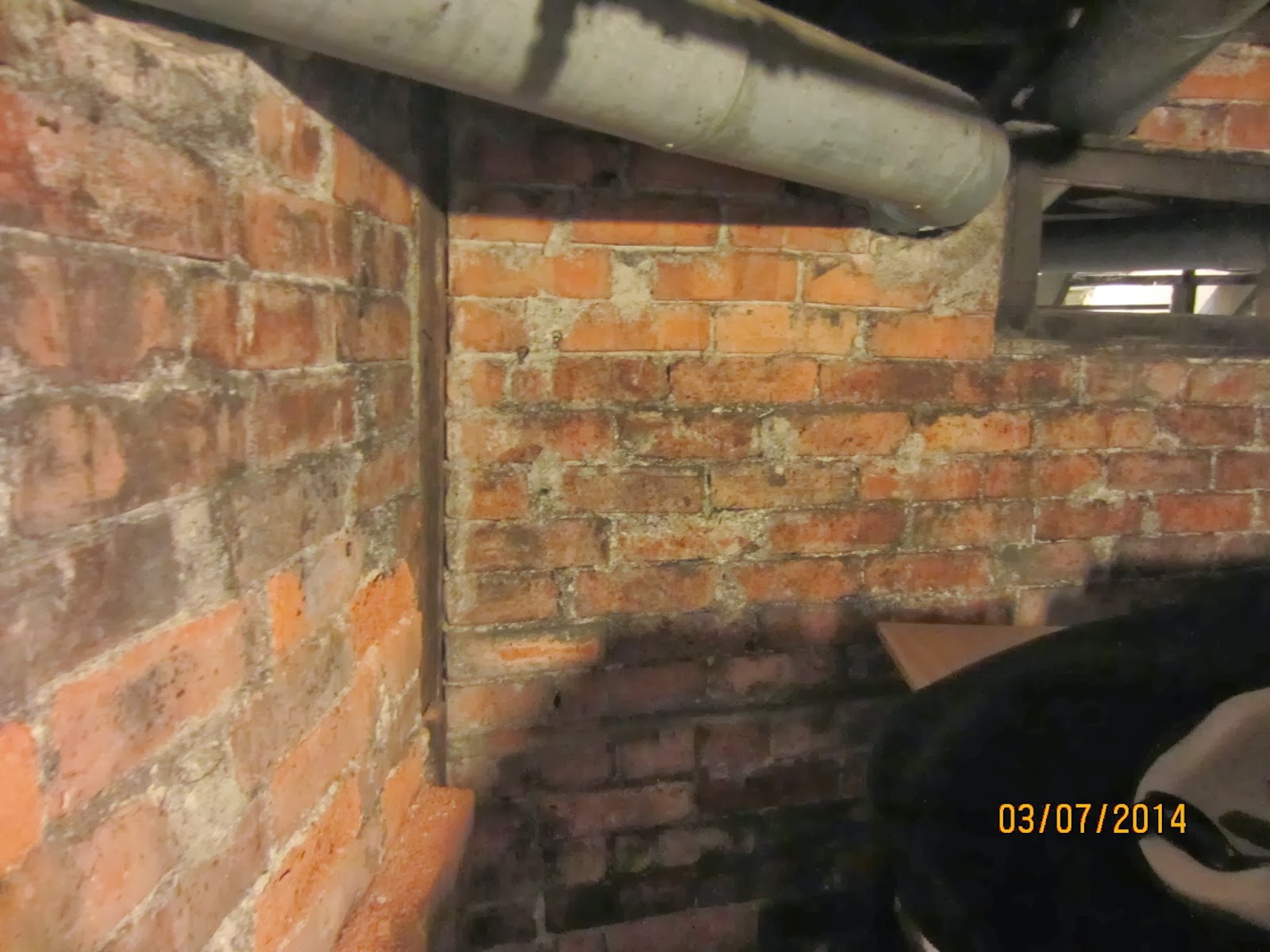 Features exposed beam ceilings, exposed brick walls (is this place a vintage/antique lovers' paradise or what?!), lots of exposed spider webs, a light bulb, and, in the winter, our family's bicycles for ample seating!

Rather than something as obvious and bourgeois as a sink, we provide this en suite indoor cistern, which is of course the final word in turn-of-the-century indoor plumbing (turn of the 19th to 20th century, that is). 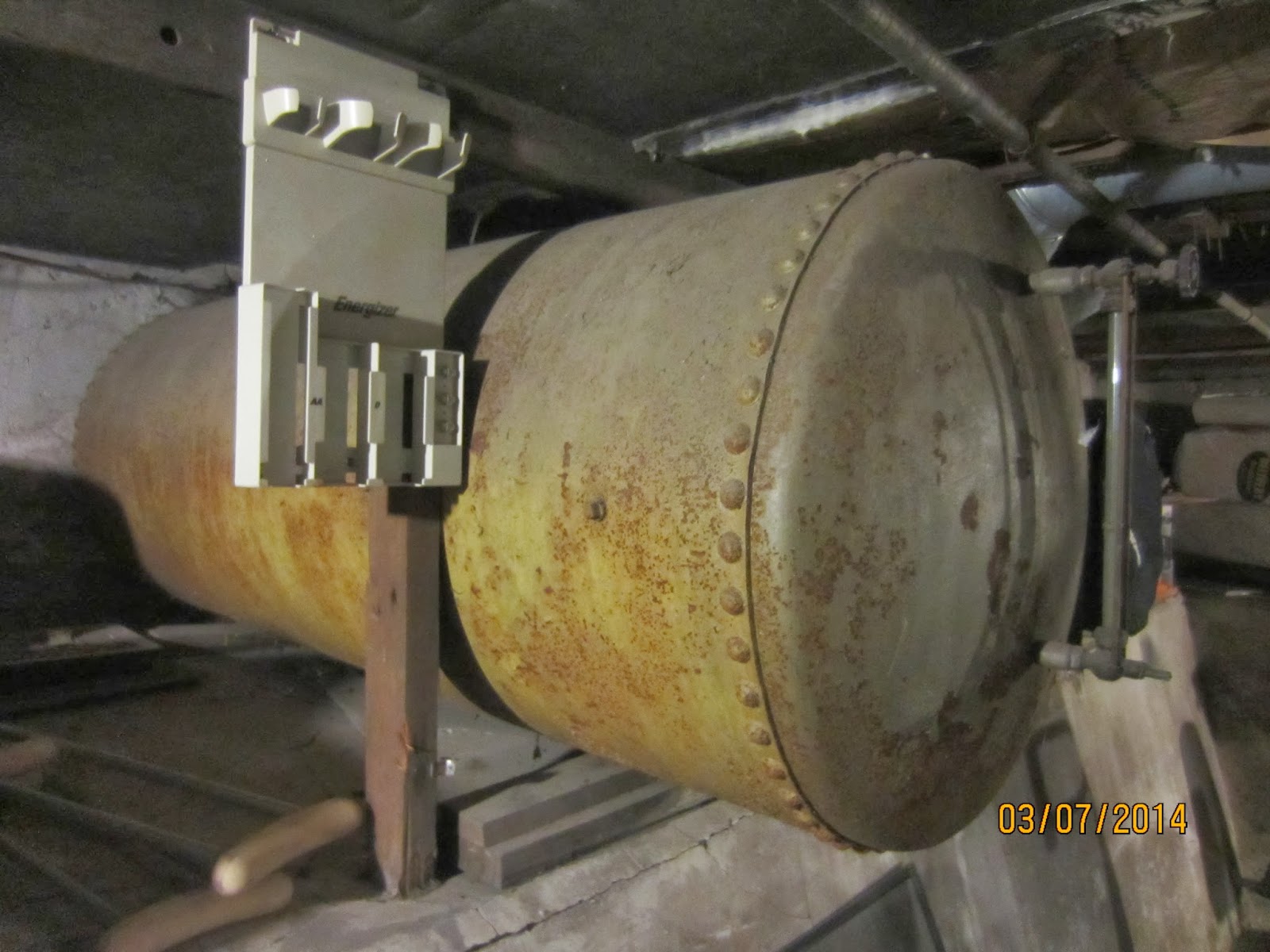 And instead of a toilet, we have this lovely drain. 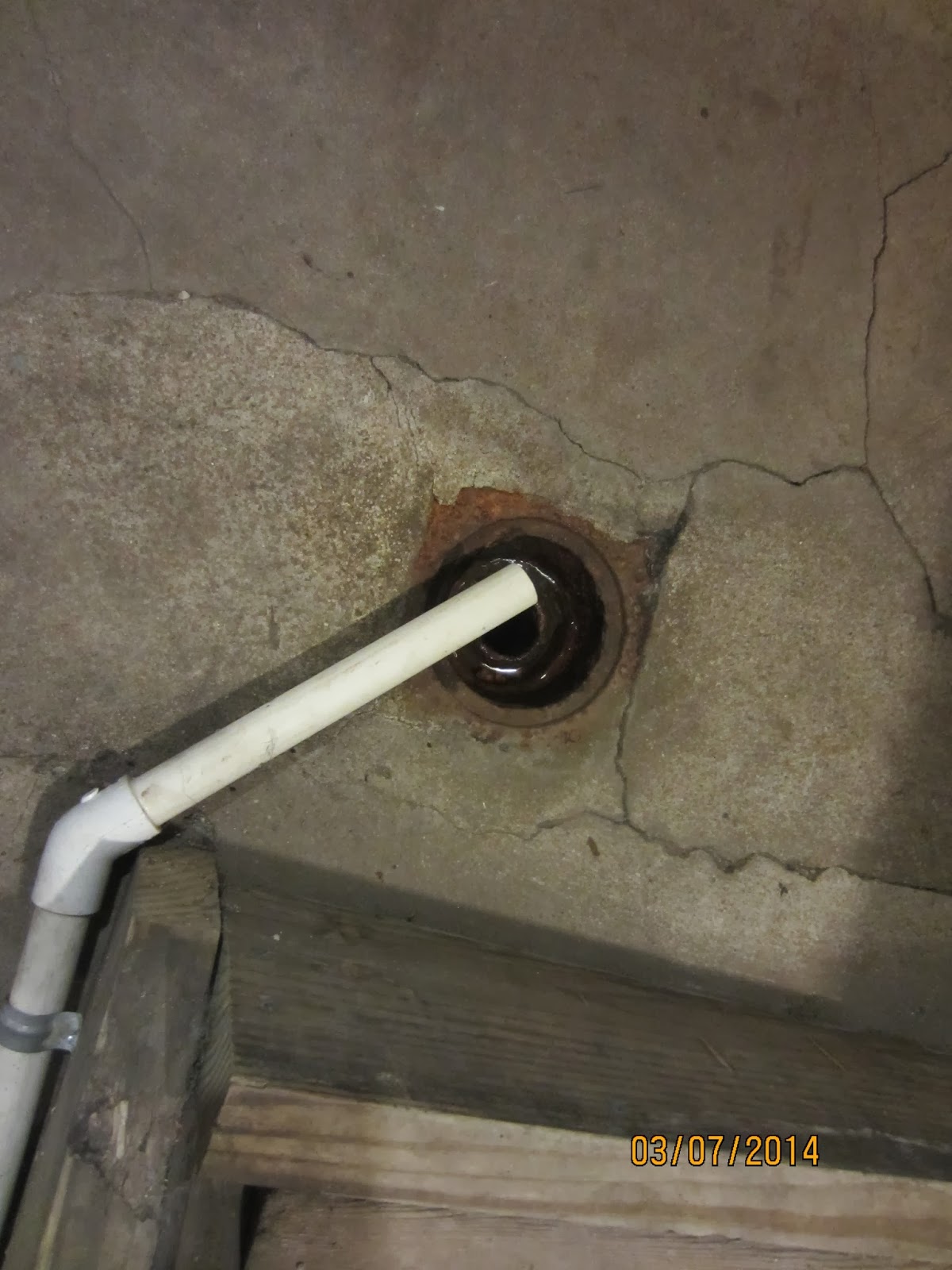 Now we just need a clever catchphrase for your new, temporary digs.  I was thinking something along the lines of "The Crislers:  For the discerning traveler with a positive attitude and healthy sense of adventure."  Thoughts?

Email ThisBlogThis!Share to TwitterShare to FacebookShare to Pinterest
Labels: Iowa, la casa de crisler, the first in a long series of vacation guides i'm sure, travels