My Husband Has An Awesome Wife

(And if that title seems disgustingly self-congratulatory, it's only because it is.)

I am a practical gift-giver.  I like to give gifts that are practical.

I don't know whether I can blame it on Nature or Nurture, but I'm pretty sure it somehow all stems from my mom.  I can't remember how many times I watched my mother wrap a first-aid kit or a fire extinguisher as a wedding gift.  And really, who wouldn't want to receive those things as gifts?  I'm sure many a happy couple thought fondly of my mom when they were bleeding or their kitchen caught on fire (both events that probably happen quite a bit in those first turbulent years of marriage).

I've never really thought of this as a negative attribute, until I started reflecting upon the gifts I've received from Derek over the life of our relationship.  They make my practical gifts seem kind of... lame.

Like the time, one wedding anniversary, Derek got me an early edition hardcover of To Kill A Mockingbird, one of my very favorite books.

Or one year on my birthday when he arranged for his sister and her husband to drive down from Maine to watch Adelaide so that we could drive from our then-home in Connecticut into Manhattan to eat supper and attend a performance of George Balanchine's The Nutcracker by the New York City Ballet.

Or a few years before that when he flew in from Connecticut on my birthday, surprising me on my doorstep in Kansas... and proposing.

Do you know what one of the first gifts was that I gave to him in college?  A water pitcher with an attached filter.  See, the water in our college town is universally known as being kind of disgusting, so in my mind, I was giving him the gift of clean, delicious, refreshing water, right in his dorm.

I realize that even with that justification, a water pitcher doesn't hold a candle to a beloved book, the New York City Ballet, or a marriage proposal.

This year, I set out to break my streak of sub-par gifts.

See, Derek turned 30 last year, and I really didn't do anything special.  In my defense, I was still pretty overwhelmed from having Caedmon and the whole I-have-three-children-under-the-age-of-five thing.

I knew that I had to make up for it this year.  Although Derek's birthday isn't until next month, I surprised Derek this past weekend.

One of Derek's favorite bands is Jars of Clay.  He's been listening to them since they formed 17 years ago, and has seen them in concert a couple times before- but he's never actually met them. 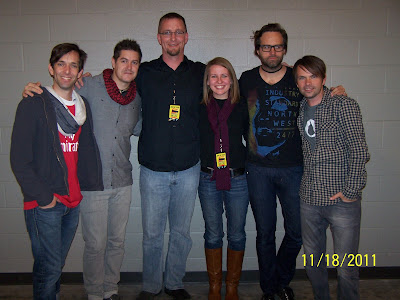 That's Derek, me, and the four members of Jars of Clay.  And if you don't think this picture isn't going on our Christmas card, you don't know the Crislers.

Yup, we were fortunate enough to be part of a small audience (think around 30 people) that got to stand about two feet away from the band, requesting and listening to them play several of their songs, asking questions, talking to them, getting autographed CD's, and taking pictures with them.  They were very funny, very approachable, and very talented.  It was so great. 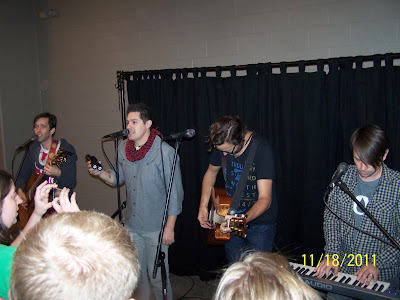 I still can't promise I won't be giving towels and measuring spoons as gifts.


Note:  I alone am not responsible for this weekend- that would be impossible.  I would like to thank Derek's parents (over and over and over again), who drove several hours to Kansas City to stay in a hotel with our children while we attended the concert.  Ben, the Visual Arts Leader at our church, also helped by switching things around to ensure that Derek did not have video ministry responsibilities Sunday morning.

Jars of Clay also played a smallish part, for which we are thankful.