Lately, I've been trying to go through the digital mountain of photos I've taken over the summer.  While the vast majority of them feature the kiddos as their subject, there's a noticeable subgenre labeled "Flowers."  (Or would be labelled "Flowers" if I labeled my photos, classified them, or really organized them at all rather than just dumping them onto the laptop and forgetting about them.)  I found so many pictures of flowers, I almost thought I had somehow gotten a folder of my Grandma's pictures.  There were no photographs of cows sprinkled in, however, so I realized they must actually be mine.

Because they're the most recent, and because I am, after all, from Kansas, today I'll share these with you. 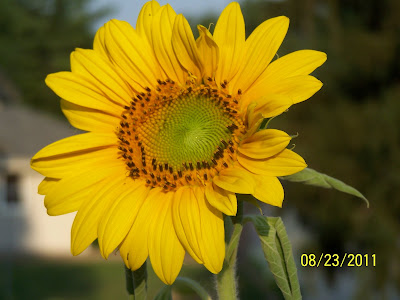 It's the only one of three potted sunflowers that survived the summer and bloomed for me. 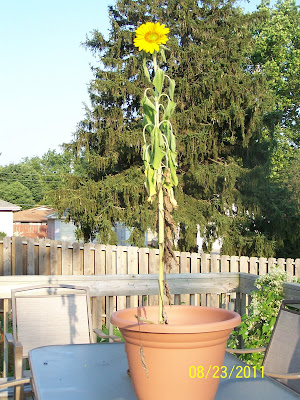 For whatever reason, it was wilting and just generally didn't look so great when I had it on the deck.  I put it on top of the table back there, and it perked right up.  I don't know why.

That pretty much personifies my gardening style.  Haphazard trial-and-error.  Sometimes lots of error.

That sunflower looks somewhat tall and impressive until you compare it to... 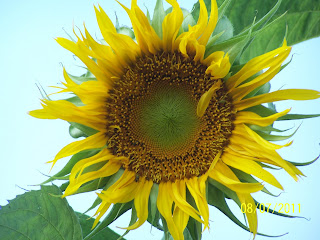 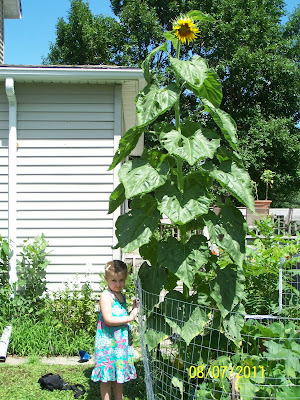 Now that is a sunflower.  Adelaide began growing it in her preschool class last spring, and it has done beautifully since we plunked in a corner of the garden and basically just left it alone.  Now we're just waiting for the head to dry out so that we can harvest the seeds.

You're probably aware that there are lots of different species of sunflowers.  According to the seed packet, that first potted sunflower is a "Mammoth."  I'm not sure what the second is, but if I had to guess I'd say it's a "Giant."

Now, riddle me this:  Isn't mammoth bigger than giant?  I guess in my head, I picture the extinct Woolly Mammoth as being bigger than the Giant in Jack and the Beanstalk.

Those are the images that pop into your head upon hearing the words "mammoth," and "giant," right?  I'm not the only one thinking these things, right?

I'm not big on annuals, but I'll think we'll be planting these again next spring.  They remind me of home, are easy keepers, and might just give us food (well, a snack).  Win-win.